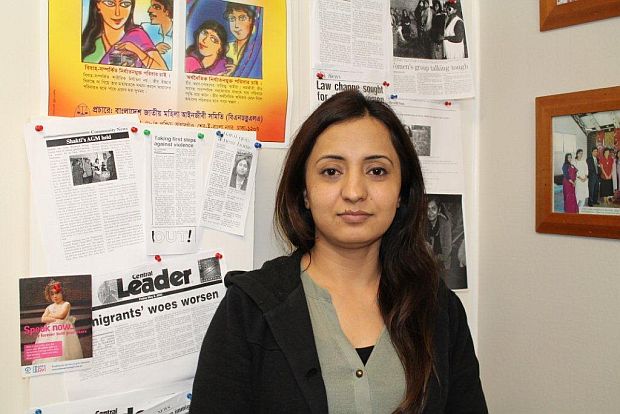 “Of course there is something to be said about celebrating diversity and celebrating people’s culture, but I don’t think beating a woman to an inch of her life, abusing her financially, isolating her from the community – is part of anyone’s culture. It’s a real cop-out for people to say it’s a 'culturally sanctioned sort of violence' because I don’t think anyone’s culture is that bad or that mean or that cruel.”

“There’s definitely more reportage which shows a dramatic increase in numbers: in 2011 Shakti recorded that 44 percent of the total case load for their clients across the country presented with some component of forced, or force underage marriage. It’s not right to be 14 and forced into a marriage and it’s happening here, in New Zealand.”

It can’t get more real than the interruption of an emergency call-out while I’m recording this interview with Pollyanne at Shakti Ethnic Women’s Centre, Wellington. The police have contacted Polly at Shakti to assist as a woman from New Zealand’s ethnic community. It’s crisis intervention, the victim is seeking refuge, it’s another incident of domestic violence.

Volunteer Nima joined Shakti four months ago. She’s from Palestine. She walks in as the phone starts ringing like crazy. Nima will need to be at Wellington Central Police Station to assist and translate for this woman because English is a second language. This victim may be struggling to communicate on top of dealing with trauma. If she’s a new migrant or a refugee from an Asian, Middle Eastern or African background, if she has children...

Who will Shakti contact on behalf of the victim? The list is endless, it includes: Police, refuges, hospitals, GPs, CYFS, lawyers, Immigration, schools... multi-agency services across the board.

Pollyanne Peña is the current organisational development co-ordinator for Shakti Ethnic Women’s Refuge, Wellington. She tells me that Shakti will be contacted daily by women seeking refuge across the country.

My first question for Pollyanne is a matter of definition: What defines culturally-motivated crime, as opposed to “normal” violence? I stop myself there – why on earth would one ever define violence as normal?

Pollyanne tells me a culturally-motivated crime is when it breaches human rights and when it is culturally sanctioned – by individuals, cultures or faiths, an example: when the Ku Klux Klan operated in the name of “Christianity”.

We discuss “cultural relativism” where an individual or a group may justify crimes against humanity in the name of culture.

“People are bringing their own cultures here, as new migrants. People say, 'Oh, but it’s in our religious texts, it’s in our culture, women have certain obligations and roles to play', but I don’t think that any of the texts or ideologies or any of the books I’ve read have ever said that you can be perpetrating violence against them. It’s absolutely not in any of the teachings, there’s nothing said about sanctioning culturally-motivated crime. It’s wrong to take these beautiful, time-honoured texts and to twist them, to interpret them in this way.”

Tragically even a protection order did not stop the murder of a woman and her daughter from the Pakistani community in Auckland. Allegedly the woman’s estranged husband was the killer. The woman and her daughter were already known to Shakti, they had sought refuge before. Was this a so-called “honour killing”?

It’s these kind of self-justified and culturally sanctioned terms for murder that get Ferrida Sultana really frustrated, really upset. Ferrida is one of the founding members of Shakti, the first of its kind in the country, ethnic women counsellors serving ethnic women survivors of abuse, whose needs may differ from survivors from the wider public. Ferrida says there’s nothing “honourable” about murder. Murder is murder.

This not-for-profit organisation, initiated in 1995, has weathered a lot of criticism from the ethnic communities for their zero tolerance stance, for their mandate that the victim comes first. Take the case of marital rape. What happens when a cultural climate of “shame”  stops victims from seeking help? What if they are propelled to stay with their abusers because the fear of being socially isolated or alienated from their community is more terrifying to them, than the abuse they suffer.

Shakti have been criticised by a few among the ethnic communities as “home-breakers” – against family reunification – isolating the women from their community. However Ferrida counters this: if you are 15 or 16 and your parents and community are the ones forcing you to stay with your new husband, the perpetrator of your abuse, then Shakti can be a vital, life-saving sanctuary.

This is reiterated emphatically by Malalai Sadat as I interview her at Shakti’s learning centre in Auckland. Malalai is Afghani, she escaped the Taliban as a child. A former refugee herself, she’s now a Youth Advocate for Shakti, dealing with 16- to 24-year-old women, cases that initially report as domestic abuse but are soon revealed to include components of a forced marriage background.

Malalai is not afraid to speak out against individuals within her own Afghani community that are participating in this culturally-sanctioned crime. She tells me that some community leaders are in denial about these cases, for fear of stigmatising or shaming their community under the glare of public scrutiny. To Malalai these community leaders seem to be painfully nervous about mainstream media becoming judgemental and negative about their community.

However Ferrida Sultana insists that Shakti does not wish to stigmatise ethnic minority communities in mainstream media. Instead, by speaking out and using mainstream media as a tool to combat culturally motivated crimes and domestic violence, Shakti and other providers like the New Zealand Sikh Women’s Association and Sahaayta in Manukau Counties are currently forging the way for positive change.

It’s “strength-based education” within the community – the message must come from role models and leaders within the ethnic minority communities in the first place. Ferrida says that a media campaign like this would show the wider public that our ethnic communities are owning these issues and trying to make changes for the better. 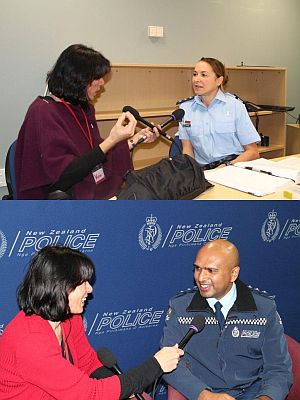 Inspector Naidoo dearly wishes that the same kind of government-funded and national media campaign could be created for our ethnic communities. The need and demand is there. Just look at Shakti’s statistics.

Also at Police National Headquarters, Inspector Bridget Nimmo tells me that she deals specifically with family violence. She tells me that the police now conduct cultural education workshops for their staff to combat culturally sanctioned crime, whether these are committed in ignorance or wilfully .

This kind of education is vital in order to prevent the police unwittingly becoming agents in the perpetuations of abuse – such as in the case of forced underage marriage. Inspector Nimmo tells me about earlier days when the police would actually aid the practice of forced under age marriage with no knowledge that they were doing so.

The scenario is simple: A 13- or 14-year-old girl goes missing, she’s run away from home. The parents phone the police to report their missing daughter. In the past, this disempowered and very vulnerable, girl would have been unwittingly brought back to her family and the situation of abuse, by the police.

The New Zealand Police are also very anxious that our ethnic communities are not negatively targeted by mainstream media. If reportage and pro-active action comes voluntarily from the communities, half the battle is won.

To assist this process the police have increased their numbers of Asian Liaison Officers working within the communities. The results have been tremendously positive so far. The community feel safe to speak to the police because this officer is one of their own – he or she can speak their language, understand the specific cultural nuances or faith-based practices.

The New Zealand Police are very keen to keep the trust of the community in this regard. They support the community’s efforts to combat culturally-motivated crime from within. Co-operation between police and community leaders is also strengthened. It’s a win-win situation and now that 13- or 14-year-old girl will be safe, because her parents will be educated to understand there are other ways to celebrate and uphold cultural diversity. Human rights abuses isn’t one of them.