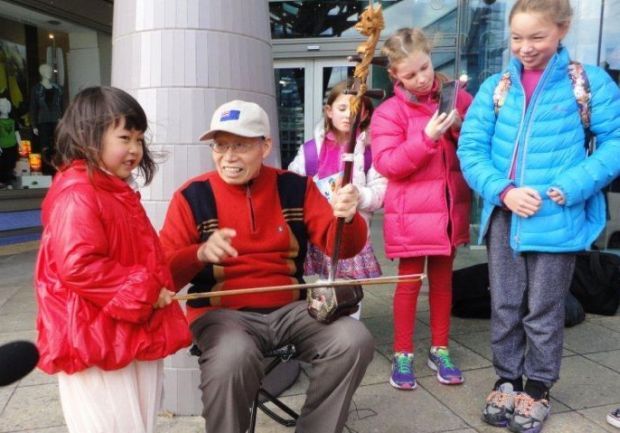 “I feel young because my music keeps me young!” – 75-year-old Mr Huang. 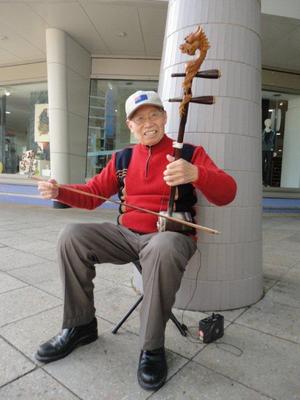 “Wow!” says one little child listening to this busker performing his erhu at the entrance of Te Papa in Wellington. Another child says it sounds a bit like cats meowing or Irish Dancing... all the children from Queen Margaret’s College recognise the New Zealand Anthem.

Xin Gang Huang’s Chinese name literally translated means 'New Steel' or 'New Strength'. It’s an apt name as Mr Huang is a hardy individual, a familiar sight busking the streets of Wellington no matter the weather. He loves busking – saying it’s like having a brand new audience and a new lease of musical life.

His music haunts the streets with an instrument created over two thousand years ago. He might be a veteran and his music is ethereal but there’s nothing about this wonderful gentleman to make you think he’s elderly. I’m checking out this formerly renowned musician from China who now busks, enchanting children and adults alike that pass him by.

But first, a little about the erhu:

The erhu is a two stringed instrument known as the Chinese violin. It has a six sided body covered in python skin. The first Chinese character of the name of the instrument, “Er” means 2 and the second character “Hu” literally means “instrument of the Hu people.”

It was originally from the North of China, inhabited at the time by nomadic tribes of the ancient kingdoms, which is probably why the erhu creates such an evocative sound that can overcome even the worst wind Wellington throws at us.

Born in Jiangxi, south of Hubei Province Mr Huang moved to Wuhan as a young boy where he learned to play the erhu professionally. He is used to performing to thousands, both solo pieces, or accompanying groups like the Wuhan Municipal Orchestra.

Mr Huang was self-taught originally. He listened  to his father playing, and was forbidden to learn at first, as his father wanted to encourage academic study instead. That is until his father overheard Xin Gang play and realised his child was a natural.

Elderly Mr Huang came here from Wuhan over ten years ago to be with his family. His grandchildren are growing up in New Zealand and naturally he wants to be with them, and to have the chance to teach his 11 year old grandson the erhu too. In a delightful little twist – his own son is a little nervous about his 11 year old becoming a musician too – academic study being the focus.

One thing for sure, you’ll never stop talent when there’s the drive.