To the uninitiated, the unboxing video seems like a particularly inexplicable digital phenomenon. The genre is characterised by low production values, jerky camera angles and stilted dialogue, as a new gadget or designer handbag is unveiled and described for the watching audience. No celebrity endorsements or special effects; just ordinary people and a strictly POV aesthetic.

Simon Morton speaks to Mireille Silcoff, who's written about unboxing for the New York Times magazine. 'Unboxing is not so much a craze anymore as a genre – a manifestation of a new world of consumer expression', writes Silcoff. 'These videos have been around, notably in the world of tech, almost since YouTube went live in 2005... Today you can find unboxings for almost anything, although luxury items or pieces of expensive technology seem to make up a large percentage of the clips.'

So don't get the idea that unboxing's all about haute couture designer wear or top-end smartphones. Some of the most popular videos involve people opening children's toys that cost just a dollar or two. Take the enigmatic YouTube user called Disney Collector. Nobody knows who she is or what she looks like, but her videos have been watched more than 3 billion times, and her annual income's been estimated at up to US$13 million! Her most popular video, catchily entitled Angry Birds Toy Surprise Jake and the Never Land Pirates Disney Pixar Cars 2 Easter egg Spongebob, has racked up no less than 94 million hits.

So who is Disney Collector? Well, Mireille Silcoff thinks she may have found her. And as for an explanation of the unboxing video’s massive yet mysterious appeal, she writes, "I spoke to some Internet experts who saw the videos as everything from consumers’ taking back the night from untrustworthy marketers, to shoppers’ trying to humanise increasingly computer-based shopping through sharing, to aspirational thrill-seeking in recessionary, digitally mediated times."

Dinner with a difference 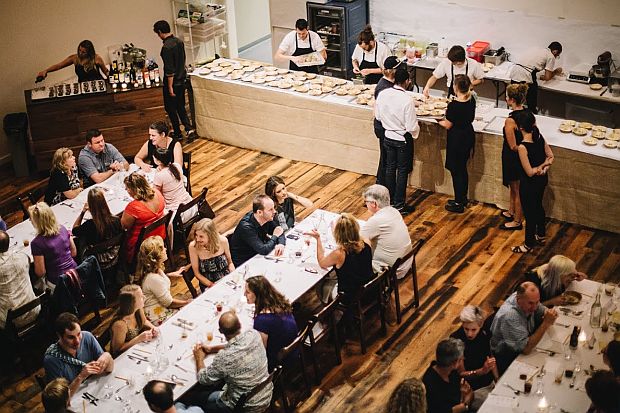 Each week, at a different location a restaurant pops up for just one night only, opening up the world of fine dining the people who might not normally experience it.

But Dinner Lab turns the culinary arts on its head, with the concept being driven by the crowd rather than the chefs.

The pop up format offers second tiered chefs an opportunity to cook for and receive critiques from everyday people. Each customer must provide feedback of what they like, or don’t like, helping future Dinner Lab menus to continue to evolve.

An innovative New Zealand design has brought a whole new meaning to "hot desking". It's a piece of cardboard that looks like a box your TV might come in. Instead it folds out into a standing desk that can withstand the weight of a human and can be carried anywhere. No screws, glue or tape were used to make the desk, only some kiwi number 8 wire ingenuity,  The four main pieces snap together to create an instant workspace

"You're an urban nomad right now. You can go and do whatever you want and set up anywhere," says Cardboard Desk creator Fraser Callaway. The Cardboard Desk weighs less than 7kgs and can be set up in under a minute.

The rise of the knitted shoe with CityLab writer Bonnie Tsui.

Naked Science with Dr Chris Smith. With the spread of ebola, is it too late for a vaccine? And funding for a pre-clinical trial for the treatment of multiple sclerosis.

Australian Bureau of Meteorology Director Dr Rob Vertessy explains how they are doing weather forecasts for half a million seperate locations in Australia.

The wonderful world of cockroaches with David Rentz, author of 'A Guide to the Cockroaches of Australia'.