The rainbow trout's one of the world's most popular recreational fish. Anders Halverson is the author of 'An Entirely Synthetic Fish: How Rainbow Trout Beguiled America and Overran the World'. 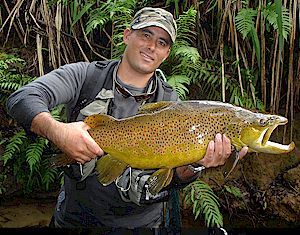 New Zealand's got a reputation as one of the world's best trout fishing destinations. We visit a spawning tributary stream, the Waipa, that feeds into the Tongariro River with ranger Mike Nicholson.

Expat kiwi Chris Parkin lives in the UK where it's better to be a birdwatcher than a professional footballer if you want to keep your car insurance down. Plus Liverpool launches the UK's first singing bin!

They're the common spice that feature in everything from mouthwash to mulled wine. Oh and they're good if you've got a toothache too!

With the world's population about to reach 7 billion, Professor Marcel Dicke is trying to persuade consumers to eat insects like locusts and beetles (and their larvae).

How technology's transforming life in Africa with Jane Wakefield of the BBC.