Minister of Finance and unofficial "Minister of Flying Nun", The Honourable Grant Robertson shares stories and songs from a life steeped in Dunedin. 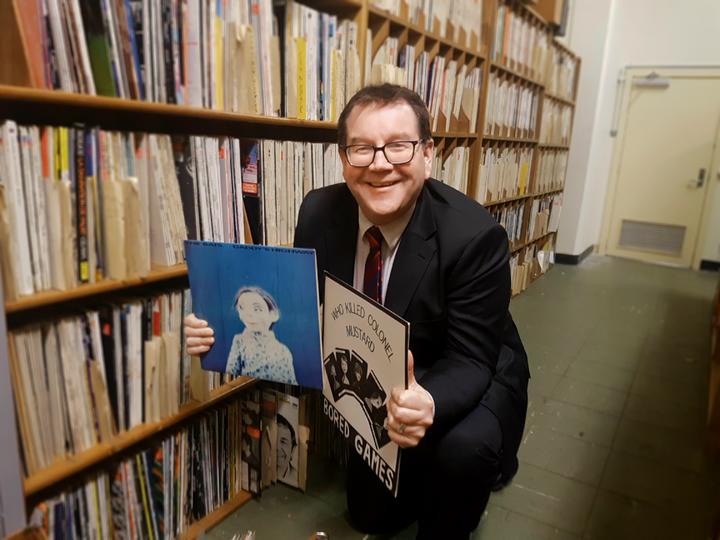 When Finance Minster Grant Robertson joined us to select songs for the RNZ Music Mixtape, he was exuberant.

"This is amazing. This is like my life's ambition to do the Mixtape. It really is. I'm one of those people who does top five lists and top 10 lists and all those things."

Roberson has been a lifelong fan of Flying Nun Records, so naturally his selections were all songs released by the iconic label.

Roberston's love of music was formed by his time growing up in Dunedin.

"We actually ended up down in Dunedin because my father decided he wanted to become a Presbyterian minister. We were living in Hastings where he worked in a bank, then he had a sort of mid-30s crisis and said, ‘I want to be a man of the cloth’.

"We upped sticks and move to Dunedin so he could train at Knox Theological College. He didn't end up finishing, but we stayed in Dunedin and that's where a lot of my formative musical experiences happened.

"The South Dunedin upbringing was a big part of who I am; my politics especially, but ultimately, it's where I discovered a lot of music too."

"I think anyone who loves New Zealand music, and Dunedin music especially, has to pay some homage to The Clean.... I kind of almost missed The Clean, and obviously came back to them later.

"And like everybody else, I think 'Tally Ho' and 'Point that Thing' and songs like that are amazing.

"But the first song I've chosen is from an offshoot of The Clean, The Great Unwashed. And I recall the song, and I think maybe it appealed to me as a little bit of a person who likes history and nostalgia and throwback, but this is ‘Born in the Wrong Time’.

"And it's Peter Gutteridge’s song … Peter tragically died a few years ago and I knew him a little bit in Dunedin and obviously things went wrong for him, but he was an absolute genius, and there's just something about this song that speaks to me about people being feeling just a little bit on the outside and maybe a little bit part of a past era."

Robertson says he’s booked leave so he can attend this year’s The Others Way festival, which has strong links to Flying Nun, and will feature three iconic Flying Nun Bands: Blam Blam Blam, Straitjacket Fits and The Chills.

"I went to The Others Way last year absolutely loved it. It's the brainchild of Flying Nun and most of the music that I'm talking about today and that was so formative for me - Flying Nun music, it just really resonates with me.

“Having had such a good time last year, I thought, 'Right I've got to do this,' I've taken myself a half a day leave on the Friday and I'll be there.”

“Reading cabinet papers on a Sunday is usually accompanied by music. Last Sunday it was The Others Way playlist that they've got up on Spotify.

“I tend to want music that I'm either really familiar with or which isn't going to distract me with ‘what's this really new interesting sound?’

“I find it acts almost like a concentration device for me, I feel like if I'm not playing music when I'm doing that, there's something missing.”

"This is in celebration of the Straitjacket Fits being on the set list of The Others Way, but we're harking back to Shayne Carter’s, I was gonna say first band, and it was certainly the first recorded offering and that’s Bored Games.

"I have a really, really clear memory of seeing in my brother’s record collection this album that had a Snakes and Ladders game on the back of it and looked like Cluedo I would have been really young when I saw it, but I put it on and it is a fantastic EP.

"It's really important to remember that Shayne wrote these songs when he was 16 years old and they've got huge longevity and so I've chosen the one that really hit me the first time I listened to it, which is a song called ‘Happy Endings’.

Robertson told RNZ Music when he was 16 he was writing “a lot of angst-ridden poetry like a good 16-year-old boy does.”

Unlike Carter, however, he was no musical prodigy.

“I definitely didn't have that talent.

“I've the flattest singing voice of anyone I know. Annette King refused to stand beside me whenever the Labour caucus had to sing anything because I'd put her off tune.”

There are tuneful members of the caucus, he says

"We’ve got quite a good band; Ian Lees Galloway is very good singer and plays guitar as well, Kris Fafoi he's a very good guitarist and singer too.”

“I've chosen this because this actually reminds me of the live experience of listening to music in Dunedin and I have a very special memory of this song being played in the main common room at Otago University and a man who's got a very important job now, he's a professor of law Andrew Geddis.

“There's a particular moment in the song where it picks up the tempo, and he looked me in the eyes as we were dancing to it, and when it hit that moment he threw me into the mosh pit.

“I went one way, my glasses went the other, but I kept dancing because this is a great song also written when he was 16 years old by Graeme Downes."

Having musical heroes as a teenager is par for the course, but Robertson’s, as a devotee of the Dunedin sound, were right “around the corner,” he says.

“I can remember going into the EMI shop in Princess Street in Dunedin to buy I think it might have been The Bats album Daddy's Highway. And the person who sold it to me was Alistair Galbraith.

“And he said, ‘I've actually played violin with The Bats’ and it's like, oh my God, these people are right there.

“As I went through my teenage years, possibly going into venues that I wasn't allowed to go into, I began to realise the music that I thought was, and still think is, some of the best music I've ever heard was right there. And it's a really unusual experience, because at one level these people are your heroes and far away, but on another level they're literally around the corner.”

4. The Chills - 'Look for the Good in Others and They'll See the Good in You' from Brave Word

“I've got huge admiration for Martin [Phillipps] and for what he's been through. I think that the music he's producing at the moment, is some of the best made and he's really still firing out some great songs and some great tunes. And so I'll be looking forward to hearing them during The Others Way.

“The song I've chosen though, is kind of … I always like Martin when he rocks out a bit. So, he's got some beautiful tunes with things like ‘Pink Frost’ but I always liked it when he let rip and so this is a song called ‘Look For The Good in Others and They'll See The Good In You’ from a really great album Brave Words by The Chills.

“He was really good friends with a guy that I flatted with, so I ended up meeting him separately - he’s a lovely guy.”

Robertson has been following the Labour Party leader's example and played a DJ set during last year’s Pride at Golden Dawn, he told Yadana Saw.

“That's all how it all came about, because they were trying to get her [Ardern] to do it and Matt at Golden Dawn realised that Jacinda’s career had possibly ended as a DJ. I've been there a few times so he asked me to do that.

“I did ask her for some advice she said that you've just got to read your audience - which is very true.”

5. The Bats - 'Miss These Things' from Daddy's Highway

“I've chosen this song because it's quite different. It's slow, you won't be dancing to this. But this is another one of those atmospheric songs where it feels to me like it reminds me of a time and a place for me. It's a song I associate with a particular person actually. And so it’s just one of those things, it's quite a slow song, it's quite a beautiful song.

“Andrew Geddis, who I mentioned before, and I used to ruin the song when The Bats would play because we would yell out for Kaye Woodward to be allowed to sing the song, and she does now in their live performances, with Robert [Scott] which is great.”

A sports fanatic, Robertson met his husband Alf playing for the Krazy Knights, a gay rugby team in Wellington.

“He was the halfback it was, you know, it was a close relationship.

“It was brilliant, it was a really important experience in my life actually, because I'd stopped playing rugby because of the culture around it. And certainly the homophobic culture around it had started to get a bit much for me.

“And so I was able to rediscover a love for rugby with a group of guys, some of them had played before, many of whom either hadn't or rugby had been part of some kind of traumatic experience of their teenage years.

“And so they were reclaiming that and we had a huge amount of fun. We didn't win many games, but it was great and yeah, that's where I met Alf.”

6. Tiny Ruins 'How Much' from Olympic Girls

“I love Hollie's [Fullbrook] music, I think it's magnificent, I think she's one of the great artists of our time at the moment.

“I first saw her in a tiny little wine shop in Dunedin playing with Hamish Kilgour of all people, and I really loved the sound.

“It's also maybe, I hope, a bit of a transition because it was a pretty boysy scene in the '80s and the '90s, there was some great stuff being done by Look Blue Go Purple and Jay Clarkson and people like that, but it was still pretty boysy, so it's nice to see a few more female artists come through and there's some great new artists out there I think of bands like the Mermaidens you know, there’s really good stuff happening.

“I really like what Hollie does and love Tiny Ruins.”

As a gay, sports-obsessed young man growing up in a Presbyterian family, Robertson says the Dunedin music scene was probably a kind of comfort blanket.

“It was itself quite a heterosexual kind of environment, but it was one that I did feel comfortable in. And, you know, maybe that's because there were a few outsiders and a few misfits, as there always are in the music scene.

Artist: The Chills
Song: Look for the Good in Others and They'll See the Good in You
Composer: Phillips
Album: Brave Word
Label: Flying Nun