On the backbenches: An MP can come from anywhere

This is part of a series about the work of various list and electorate MPs around the country. Read the other parts in this series on Labour MP Deborah Russell or National MPs Denise Lee and Kanwaljit Singh Bakshi. 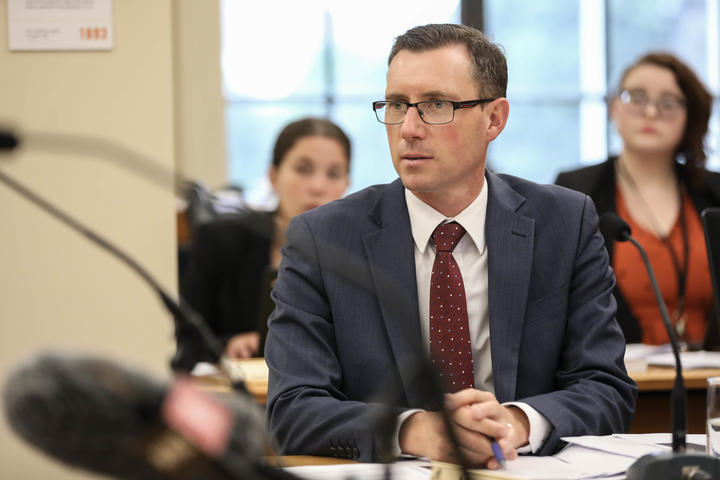 Labour’s Jamie Strange entered Parliament in 2017 but before that he had a varied career.

The contents of the Hamilton-based list MP’s CV includes former church minister, music teacher and musician. He’s even released an album (and isn’t the only MP to do so. Defence Minister Ron Mark released an album last year. The House is also told there’s a cross-party MP rock band).

“Some people say to me, well, that’s a bit weird,” Mr Strange says about his background.

“But, when you look at it, they’re all very similar because it’s about people.

“Fundamentally, that’s what a Member of Parliament does… we’re elected to help people, particularly in a lot of the constituent work we do.”

He says being a music teacher also proved to be a catalyst into politics.

“One of the reasons I got into politics was that I believed the education system needed to be broad.

“I was concerned at the time, back around sort of 2012, where there was talk about removing specialist subjects from intermediates and narrowing the curriculum.”

Mr Strange says having children was the other catalyst.

“Just sort of pondering those questions around ‘What’s the world going to be like for my kids when they grow up? Will they be able to afford to buy a house? Will there be a good health system for them?’”

Our careers come and go; our family remains constant. pic.twitter.com/ZBhkWz9aqM

Because he’s a list MP, Mr Strange is a little different to the other backbench MPs The House has spoken to for this series. So, while he’s not been elected for any particular electorate, he’s still his party’s representative in the Hamilton and Waikato region and still works with constituents. He also works in parts of the Taranaki-King Country electorate.

He says he sees “quite a bit” of individual immigration cases.

“For a lot of people, the process [with immigration] doesn't always go as smoothly as they would hope or they would expect.

Mr Strange says housing is another common issue coming through his office given the rapidly-growing Hamilton, especially as its transport links to Auckland improve. He says the region is a couple thousand houses short.

Keeping the balance between party and community

When representing a region and its needs, whether it be issues around housing and transport for example, a backbench MP has a couple of options.

They don’t hold a ministerial position, and therefore don’t have a direct way of controlling the Government’s lawmaking programme, but they still have influence.

During recess weeks, Mr Strange says he visits health and education providers, local businesses and various community events “just to listen and see how I can advocate”.

Another interesting and informative #growwaikato event tonight, based on the Waikato dairy industry. A big thank you to our speakers from Gallagher Group, Hill Labs, Fonterra, Innovation Park, and Spring Sheep Milk. These events fill me with a great sense of pride in our region. pic.twitter.com/lLVfBo1NaH

“One of the most interesting aspects of being a member of Parliament is that every day is completely different,” he says.

On the day The House visited him, Mr Strange was getting ready to head to the Waikato Institute of Technology (Wintec) alongside the Waikato branch of Young Labour.

“I’ll be engaging with students, having a bit of a chat, seeing what the key issues for them are particularly as we lead up to an election in a few months.”

On other days, he tries to put his musical skills to use.

“I’ll often take my guitar along to ECEs [early childhood education centres] and do a bit of a music lesson with the kids,” Mr Strange says.

After hearing from constituents, backbench MPs can lobby ministers on their behalf to try and get the best deal for locals.

But, it can be a bit of a balancing act when that MP’s party is in Government. How can they advocate for their communities while making sure they're not tearing down their party’s policies if there’s something that’s not quite right for the region? 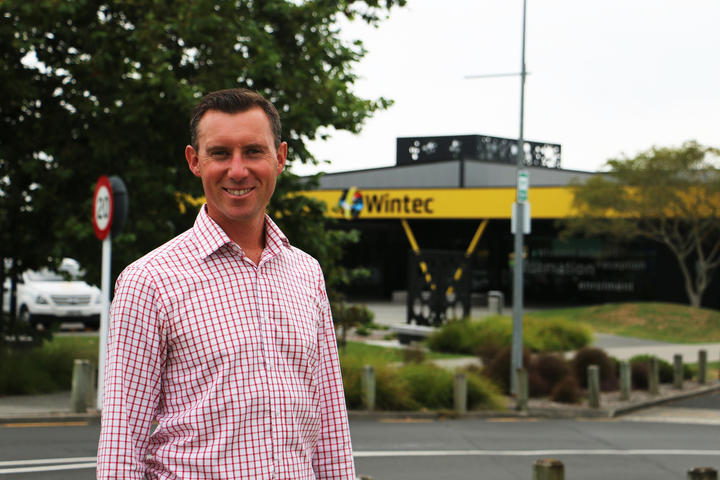 “As a Government MP, I support all of our policies 100 percent,” Mr Strange says.

“If there’s something that I have an issue with or if I feel that something needs to be a bit more nuanced within my region, then I will have a conversation with, generally, the Minister or the caucus.

“However, that conversation will be in private and we’ll work through the issues. If I don’t get the outcome I want, well, I’ll still support the party. But, you know, my voice has been presented basically.

“But there has been the rare occasion when an MP has crossed the floor.”

Despite having to keep that balance in check, being a backbencher while your party is in Government also comes with perks.

“As a Government MP, I regularly lobby ministers. I meet with them one on one and I bring to their attention some of the issues that are taking place in our region, and also some of the opportunities,” Mr Strange says.

“I certainly appreciate the work that all the ministers are doing and the challenges the ministers have around their decisions because they're looking nationwide.

“I mean, I'm a voice for this region, but they've got a nationwide lens.”

He says learning how to lobby was one of the more difficult things to learn as a new MP.

“You have to know the processes and how you can access the funds. Then, you need to know which projects are likely to receive a positive outcome.

Mr Strange says he doesn’t take the access he has to ministers as a government backbench MP for granted.

“As an opposition MP, it’s a little more difficult [to get access to ministers].

“You can write a letter, and then that letter goes to the Minister. But, you certainly don't have that sort of face-to-face access or, often, you don't quite have that same level of relationship with the minister—not in every case. There are a few exceptions, but generally speaking, I think that’s fair.”

How sweet are your drinks? 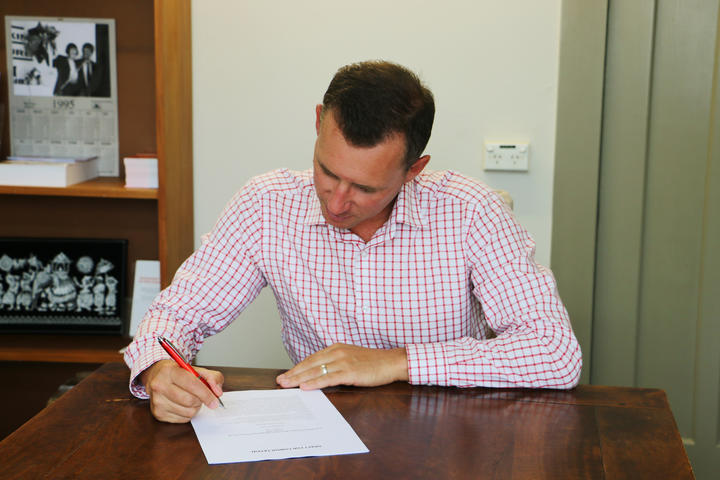 Aside from lobbying ministers, backbench MPs can take a chance on a lottery system for members’ bills to try and influence laws.

Any MP can create a members’ bill so long as they’re not a minister. But, they’ve got to rely on pure luck for their bill to be picked out of a ballot. This can sometimes take years, to the point the members’ bill sometimes switches hands if the MP who originally placed it in the ballot retires, isn’t re-elected or becomes a Minister.

Mr Strange’s members’ bill, the Labelling of Sugary Beverages (Displaying Teaspoons of Sugar) Bill, wants manufacturers to prominently display the number of teaspoons their drink has.

“I think a lot of people don't realise how much sugar they're actually consuming, how much harm it's doing to their body and then how much pressure it's putting on our health system.”

Work, life and plans for the future

When he’s not working, Mr Strange says taking time off is important. He’s joined an indoor football team with his kids to get some quality family time.

Tonight I fulfilled a bucket list item: to play a competitive match in the same football team as my boys. We lost 9-7, but all three of us scored goals, and we had a great time. Thank you Star Turf and my other team mates for allowing me to fulfil my dream. pic.twitter.com/YXOOHCZ31j

“I've just really loved it. It's been one of my bucket list items.

“You do have to be quite intentional around your personal calendar, otherwise a job like this can be quite consuming.”

As for plans for the future, Mr Strange says he’s happy to continue advocating for his region.

“I very much see myself as part of a team, and I say that genuinely,” he says.

“If there's any aspiration, I guess it's just to hopefully leave my mark within our region as someone who was a strong advocate.

“There are a lot of people who are struggling, even though we are a fairly wealthy region.

“I would like to make a genuine difference in their lives… ensuring that we’re all on that waka together and that the whole region is benefitting.”

Read the other parts in this series on Labour MP Deborah Russell or National MPs Denise Lee and Kanwaljit Singh Bakshi.