Ahakoa he iti, he pounamu
Although small, it is a treasure

In Te Ahi Kaa, Maraea Rakuraku spends time with Mere Takoko who founded a diet and exercise programme Chumpchange 10 months ago, that is aimed at revolutionising Māori bodies and minds.

Beatrice Yates (affectionately known as Aunty Bea) is known throughout the Rotorua community for her philanthropic work, teaching career and impersonation of Tina Turner. Justine Murray visits her at home where she discovers a link to waiata Māori classics, Oma Rapeti and One Day a Taniwha. 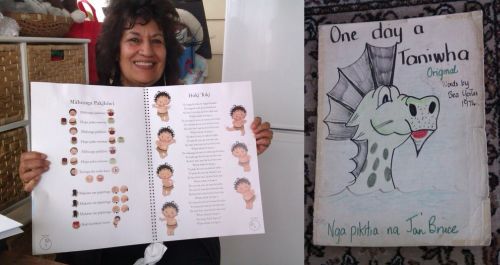 Left: Aunty Bea with one of her many publications. Right: The original One day a Taniwha Book (written by Beatrice Yates in 1974).