Te Ahi Kaa marks the upcoming Te Wiki o te reo Māori (23- 29, July 2012) where the theme is Arohatia te reo Māori – Love the language with a nod to the ways te reo Māori is being honoured around the country in its everyday practice. 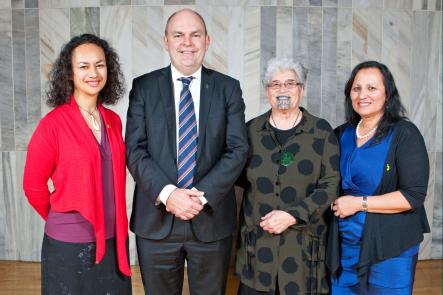 Giving a submission at a Waitangi Tribunal hearing isn’t just about legal rhetoric it involves presenting very personal stories and accounts of your connection to whatever it is, being questioned or asserted.  For the past fortnight from 09 July - 20 July, 2012 Waiwhetu Marae, Wellington has hosted the Waitangi Tribunal Hearing WAI 2357 and WAI 2358 where evidence of the relationship between Māori and water has been heard. Te Manu Korihi reporter Rosemary Rangitauira, talks with Haami Piripi and Toni Waho about their respective Iwi positions.

When Ngoi Ngoi Pewhairangi (1921 – 1985) and Katerina Te Heikoko Mataira (1932 – 2011) were pioneering the Ataarangi method of learning te reo Māori with coloured sticks, they travelled the width and breadth of Aotearoa- New Zealand.  It was at Kokiri Marae, Wellington in the 1970’s where Mana Elizabeth Hunkin, a teacher from Nuhaka - Wairoa encountered them and inspired, began teaching the language which led to the establishment of Te Kura Motuhake o Te Ataarangi, the school she now heads.   Justine Murray is with Hunkin who alongside two others was a recipient of the 2012 Tertiary Teaching Excellence Awards in a Kaupapa Māori context.

It all starts with the kaupapa - what you’re trying to say.   Then there’s the reo component and the tune to consider and that’s all before you’ve even started composing.   Ivy Phillips explains the process she used in writing the waiata-a-ringa, for the Aotea Utanganui performance at their regional kapa haka competitions held in May 2012.