When you’ve spent most of your lifetime looking and fishing in a harbour you start to notice when things change. Steve and Delia Morunga describe to Maraea Rakuraku how the pollution of the Rawene Harbour coupled with the water quality within the Settlement, impacts upon their lives.

Heard of cultural mapping? We hadn’t either, yet it’s an example of Dr Ocean Mercier’s work at the interface of Mātauranga Māori and Western Science and, an aspect of her teaching practice that was recognised through a 2012 Tertiary Teaching Excellence Award. The Victoria University Lecturer chats with Justine Murray. 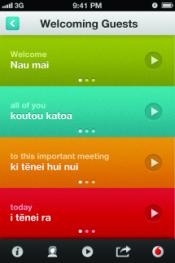 To recognise Māori language week 2012, here are a few handy websites to help you learn maori words, and a few Māori organisations and their roles.