New Zealand reality television has spawned shows like Celebrity Treasure Island, New Zealand’s Next Top Model, The Secret Lives of Dancers and now its latest offering, The GC, filmed in Australia and produced by Black Inc Media. The GC focuses on the lives of Māori living it GC styles on the Gold Coast.  When it first screened, the negative feedback was instantaneous and all over social and online media. Maraea Rakuraku gets another side of the story with its producer Bailey Mackey, whose other television programme Atamira showing on another network has been subsumed by focus on The GC. 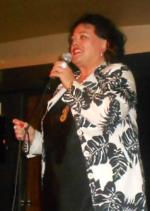 'Who Dat Sheila?' is the one woman comedy show put on by its star Parekotuku Moore (right) who describes herself as a sassy wāhine Māori. A few days out from the show, Justine Murray meets up with her to talk about her dual roles, as a comedienne and director of the National Network of  Stopping Violence.

In an archival recording from 1994, Arnold Manaaki Wilson (1928 -2012) talks with broadcaster Henare te Ua (1934-2007) about a range of topics including identity and how it has contributed to his artistic practice as an artist.