Hold onto the big crayfish

A mentoring scheme experienced at University is playing out in real-life for David Hakaraia.  The designer collaborated with Rangi Kipa to produce the Rugby World Cup 2011 Man of the Match trophies which are handed to players at the end of each game. Hakaraia is with Maraea Rakuraku talking about the value of Victoria University’s Te Roopu Awhina and the thrill of his work winging its way to International Rugby Players’ trophy cabinets. 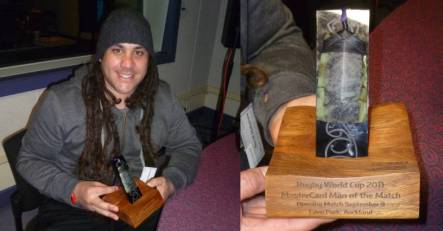 In his thirty years as patron of the Otaki Māori racing club, Jim Winiata has seen many changes, from the many spectators during the 1980’s to its steady decline in patronage in recent years. Justine Murray visits the 85 year old and the club caretaker Jim’s daughter Teresa Fulford.

Robyn Kahukiwa has been prolific during her 40 year career if the number of works adorning government departments and educational institutions are anything to go by.   In an archival recording from 1984 the artist is grilled by whanaunga, Keri Kaa.