"He iti te matakahi, pakaru rikiriki te tōtara"
A wedge may be small but it can't fragment the tōtara
Explanation by Māmari Stephens nō Te Rarawa

According to tourist operator Mike Tamaki, being inspirational enough to inspire somebody else to make the sacrifice to fulfil your dream was the first business lesson he ever learnt. That was after convincing his brother Doug Tamaki to trade his prized Harley Davidson for a 16 seater bus to kick off his idea to bus tourists to Rotorua landmarks. Making light of that sacrifice was the second business lesson he learnt. After Mike joked with Doug that if the business failed, Doug could always sleep in the bus, the brothers traded punches outside the Ngaruawahia pub. Over twenty years later Tamaki Tours (Rotorua) is one of the most successful tourist operations in Aotearoa, hosting 100,000 tourists a year, and that success has been expanded into Christchurch. Justine Murray visited Mike Tamaki, now based in Christchurch, who recalls those early days and reveals how his view on what constitutes an authentic Māori tourism experience has changed. 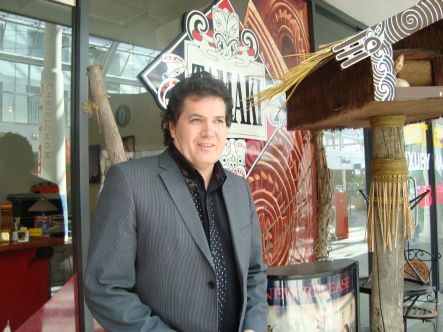 The ultimate goal for The Māori Legal Project spearheaded by Māmari Stephens no Te Rārawa, in association with the New Zealand Electronic Text Centre, is to produce a Māori legal dictionary. Digitising 14,000 Māori language legal texts from the early 19th century will eventually enable law students to complete assignments in te Reo Māori using the correct Māori legal word and contribute to the creation of a corpus of Māori legal terms. In talking with Stephens about the Māori legal archive Maraea Rakuraku discovers that the current status of the Whanganui /Wanganui debate may well have been different, had the researcher employed by the Wanganui local council used Māori language sources.

In the podcast version of Te Ahi Kaa, Pākeha Max Sullivan and Stuart Yeates of the New Zealand Electronic Text Centre, speak to Maraea Rakuraku about their role in the project while linguist Dr Mary Boyce explains some of more technical terminology at the launching of the Māori legal archive on the 8 June, 2009.

Known for her fiery on-stage presence with Rotorua kapahaka group Te Matarae i o Rehu, Taini Morrison (1958 - 2009) has certainly left a mark on the kapahaka scene. The closing waiata Moe mai e hine is a tribute to Morrison, who died earlier this week.