The announcement by the crown that Māori in Tāmaki Makaurau would lose representation on local councils as guaranteed through mana whanau status and the Treaty of Waitangi was met with an outpouring of disapproval. Ngati Whatua Iwi in particular were outraged having some months earlier submitted to the Royal Commission on Auckland governance their proposal for representation that included four of the 20 seats being set aside for Māori. When the crown counteracted with the complete removal of Māori seats the response from Ngāti Whātua was swift. Discussing strategies at a hui at Orakei Marae, Auckland on the 15 April 2009, it was to be the internet, in this instance, that would became one of the more proficient tools of mobilisation.

Ngarimu Blair nō Ngāti Whātua was one of the brains behind the creation of the IHI (Iwi Have Influence) blog that communicated the issues to the motu which culminated in a hikoi that took place on the 25 May 2009, along one of Auckland's busiest city streets, Queen street. Blair talks with Maraea Rakuraku about the history of his people and backgrounds the significance and need for mana whenua representation on city councils.

Maraea Rakuraku was alongside the thousands who braved the shocking weather and reports on the Supercity Hikoi that took place in downtown Auckland on the 25 May 2009. 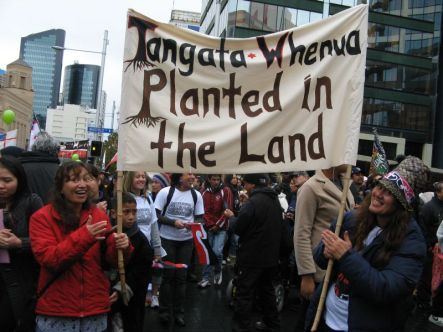 Lisa Reedy nō Ngāti Pōrou has worked for iwi radio station Tahu FM since she was 16 years old and during that time she has done it all. Currently co-hosting the Big Breakfast show with Ra Dallas, Reedy certainly leads an action packed life that outside of radio consists of writing, painting and looking after her sharpie-bull mastiff cross dog, Lola, with new husband, Matt. Facilitating the 2006 Christchurch Cultural Festival as the first female Māori master of ceremonies has been a career highlight to date. Justine Murray kicks back with Reedy and takes in a tour of the Tahu FM premises.

Tuahine from the album Snap Happy by Taniwha.