"He Mahi Kai Takata, He Mahi Kai Hōaka."
It is work that consumes people, as greenstone consumes sandstone.
Voiced and explanation by Paula Rigby (Kai Tahu)

Carvings in a Whare Tipuna (meeting house) tell stories including whakapapa, mythology and stories significant to the local iwi. In our second segment on Awarua Marae (Te Rau Aroha) in our series, Nga Marae o te Motu, Maraea is shown around the ancestral house by Dean Whaanga who relates the kōrero and meaning of the pou (carvings). The house was designed by Cliff Whiting and features, as Dean puts it, 'Resene Colours' on some of the carvings. There are some delights inside the house including māuri stones and a whakapapa wall.

Justine spends time with Paula Rigby (Ngati Kahungunu, Tuhoe, and Ngai Tahu) who is the Māori arts advisor at the Christchurch City Council and in her spare time likes to weave. Paula worked on the tukutuku panels at Nga Hau e Wha Marae in Christchurch during the early stages of its construction. 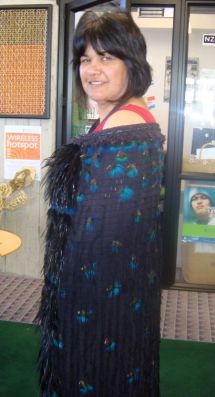 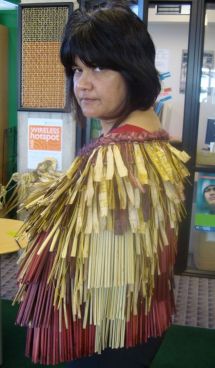 Paula Rigby with her garments. Left, a korowai (cloak). Right, a paki (rain cape) made of kuta, pingao and harakeke.

Melody Thomas discusses whanau, music and childhood memories with Warren Maxwell (Tuhoe). Warren has lent his musical talents to numerous bands over the years. How's this for a résumé; he was a founding member of Trinity Roots, formed part of the group Fat Freddy's Drop, and is a member of blues quartet Little Bushman. Warren grew up in Whangarei and made the move to Wellington back in 1989.

Tupāpaku- describes someone who is deceased

Where we get born - Little Bushman