New Zealand has set ambitious new targets for its trade relationship with China. But is this achievable given the fallout from last year's Fonterra botulism scare? The dairy cooperative is adamant there's been no fallout, but other dairy companies and commentators say it has dented New Zealand's reputation as a safe food provider. Demelza Leslie travelled to China with the Prime Minister and investigates if the new trade targets could become a reality.
Produced by Philippa Tolley.

Mediawatch looks at the press pack reporting the royal tour, and why our TV channels are now putting more programmes online instead of on the air.  Also: Mixed messages on judging by appearances; and what do we learn when the media visit politicians at home in search of their human side?
Produced and presented by Colin Peacock and Jeremy Rose.

With whistleblowers Julian Assange and Edward Snowden back in the news in recent days, Wayne takes a fresh look at their revelations of state surveillance, and describes the little-known private surveillance world that most civil libertarians have overlooked. Wallace follows up with Pam Dixon, Executive Director of the World Privacy Forum.

Almost a year since more than 1100 people were killed in the Rana Plaza clothes factory collapse, one of our top designers Francis Hooper explores where Kiwi designed clothes are made, and Pulitzer prize-winning US journalist Ken Weiss (right) contemplates the stark choices facing women factory workers in Bangladesh.

Mental as Anything’s and Dog Trumpet’s Reg Mombassa (aka Chris O’Doherty) is holed up on Waiheke this week playing his 2nd gig in NZ in 20 years, and showcasing his art.  He’s taking part in the 2014 Artists in Residence Programme at the Waiheke Community Art Gallery, opening on Thursday. 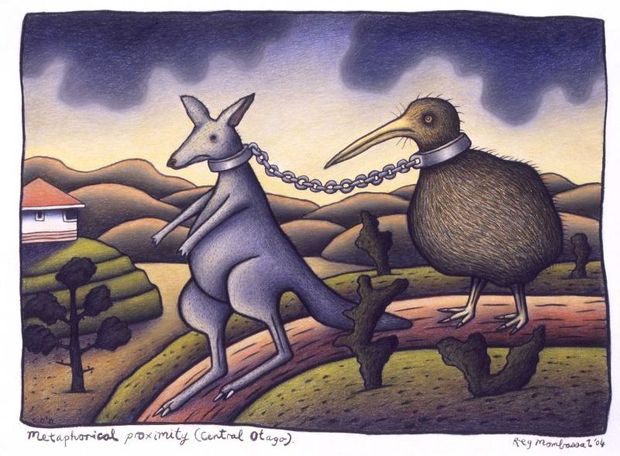 Satire.
Down the List is written by Dave Armstrong and produced by Adam Macaulay and Duncan Smith from the RNZ Drama Department.

A royal tour is about as big as it gets in the world of women’s magazines. For months New Zealand Woman’s Weekly editor Fiona Fraser has had this tour marked on her calendar – not just because she appreciates a good frock., but because it's no secret that the royals, particularly young royals, have the ability to sell a lot of magazines. She tells Wallace why the royals are still so popular, and just what goes on behind the scenes at a magazine dedicated to following them.

Professor Helen Berry, associate dean at the faculty of health at the University of Canberra, is one of three Australian academics who contributed to the health chapter of the recent IPCC report. She has warned that the Earth is warming so rapidly that unless humans can arrest the trend, we risk becoming extinct as a species.

Former drama teacher and casting director Rosie Belton (right) has a motto she lives by: “When all else fails – cook!” Her new book Wild Blackberries explores her life through food. It’s about how food enhances the feeling of celebration, and comforts in times of sadness. Having lived through nearly four years of earthquakes in her hometown of Christchurch, Rosie tells Wallace Chapman about why the kitchen and dining table provided so much solace in such unstable times.

Artist: Mental as Anything
Song: If you leave me can I come too?
Composer:  Plaza
Album: Mental as nything Best Of
Label: Fetival