Water is a huge issue in traditionally drought prone areas such as Hawke’s Bay and the Wairarapa – even more so with the controversial proposed Ruataniwha Dam under consideration. Critics of the dam projects say the regional councils running these schemes have not been transparent enough and key information is being kept out of the public arena.  In the Wairarapa, landowners say they are living under the threat of having their land forcibly acquired. But supporters of the scheme point to the urgent need to boost the economies of these areas and to create jobs. Radio New Zealand's Hawke’s Bay reporter, Peter Fowler, investigates the drive to build irrigation dams and worries about the process.

Around half a million protestors took to the streets of Taipei last weekend to protest against the government’s move to approve a trade pact with China, and to show support for the students who have occupied Taiwan’s legislature for more than two weeks. New Zealander Ron Hansen joined the demonstration. 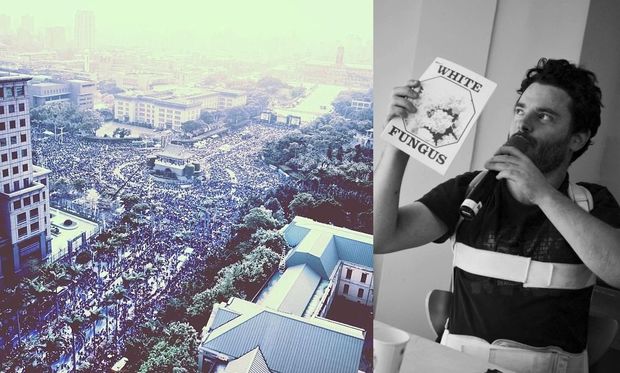 Australia’s review of its Vilification Act has brought Muslim sensitivities back into the headlines, along with all the usual stereotypes. Wayne takes a timely look at the little-known strand of liberalism that’s part of Islam past and present. Wallace follows up with Ani Zonneveld of the LA-based Muslims for Progressive Values.

Perhaps best known for his role as Baldrick in the Blackadder series, Sir Tony Robinson is in New Zealand unearthing stories from World War I for a new television series. We speak to him about this and his own family wartime history as well as his remarkable relationship with Rowan Atkinson.

Monica Dux has written about the tough physical and emotional aspects of pregnancy and childbirth, the embarrassing stuff we prefer to gloss over. She argues that women struggle to live up to society’s expectations of the perfect pregnant woman, who is effortlessly glamorous, and in charge of her life.

Things I Didn't Expect (When I Was Expecting) by Monica Dux, is published by Melbourne University Press (MUP)

Jeremy Hansen is the editor of Home magazine and one of the judges for the prestigious Home of the Year award. We speak to him about this year’s winning entry – two cabins perched on the Kaipara Harbour – and the ensuing criticism that has arisen. Also, new trends in architecture – is smaller better?

Satire. Potential coalition partners line up in this week’s episode of Down the List.

Down the List is written by Dave Armstrong and produced by Adam Macaulay and Duncan Smith from the RNZ Drama Department.

Tim Wilson was TVNZ’s US correspondent for 10 years. He’s living in Auckland and his second novel, News Pigs, has just been published. It’s a satire of the media world and Tim talks to Wallace about how much it’s based on real life.

Johnson Witehira is an artist and designer of Tamahaki (Ngāti Hinekura), Ngā Puhi (Ngai-tū-te-auru), Ngāti Haua and New Zealand European descent. He spent six years studying the use of Māori imagery and patterns for his PHD at Massey University’s Te Putahi a Toi, School of Maori Studies. He says his goal as a designer is to bring Māori visual culture back into the lives of Māori – to make it accessible.

Johnson Witehira’s Land of Tara exhibition opens in the light boxes in Courtenay Place Park, Wellington, on Thursday 10 April and runs until 3 August, 2014.

Flautist Miho Wada was spotted by Nigel Kennedy in the legendary Ronnie Scott’s Jazz Club in London. The Japanese-born, Christchurch-raised musician is touring the country with her jazz orchestra. We speak to her about her unique fusion style of music, and find out what it’s like to record with Iggy Pop – among others.