There are more marine reserves than ever before – but is this a genuine step forward for conservation, or nothing more than a token gesture? The government says it is committed to preserving New Zealand's marine environment with a record number of marine reserves being unveiled this year. It says it wants to be a world leader in marine management but environmentalists are saying the reserves are offering a pitiful level of protection. They say the introduction of more reserves is a clear contradiction when the government continues to encourage oil and gas exploration.

Radio New Zealand's fisheries reporter, Alison Hossain, explores whether New Zealand is paving the way as a world leader in marine protection or is at all just smoke and mirrors?
Produced by Philippa Tolley.

Mediawatch looks at the right royal media frenzy; what prompted Maori TV’s bosses to apologise personally; the launch of a new lobby group that’s demanding better broadcasting; and the possible demise of a groundbreaking magazine.
Produced and presented by Colin Peacock and Jeremy Rose.

New York’s Nueu Galerie is presently running an exhibition on the modern art that was bitterly attacked by the Nazis, who mockingly ran “degenerate art” exhibitions around Germany in the late 1930s. Wayne looks at authoritarian hostility to non-representational paintings and other art forms. Wallace follows up with a guest.

Expatriate New Zealander Andrew McAlpine was the production designer on Half of a Yellow Sun, which opens in NZ on April 24. It’s based on the novel by Chimamanda Ngozi Adichie and tells the story of the Biafran war.
Andrew was production designer on Jane Campion’s The Piano, for which he received a BAFTA and an AFI Award. He has since done numerous films, most recently An Education, Quartet and The Beach. He also did the NZ film My Talks with Dean Spanley.

Comedian Julian Clary performs his new show in Auckland on April 27, in which he vows to leave no ‘straight’ unturned in his search for a partner.

Richard Holdaway is director of the space division at the UK’s Rutherford Appleton Laboratory. He talks to Wallace about the feasibility of mining the moon, and the problem of property rights on the lunar landscape.

11:05 Easter Service from the Transitional Cathedral

This year’s Easter Service comes from the Transitional Cathedral of the Anglican Diocese of Christchurch. The Dean of Christchurch the Very Reverend Lynda Patterson leads the service. Brian Law, the Cathedral’s director of Music, conducts the Christchurch Cathedral Choir. Martin Setchell is the organist. 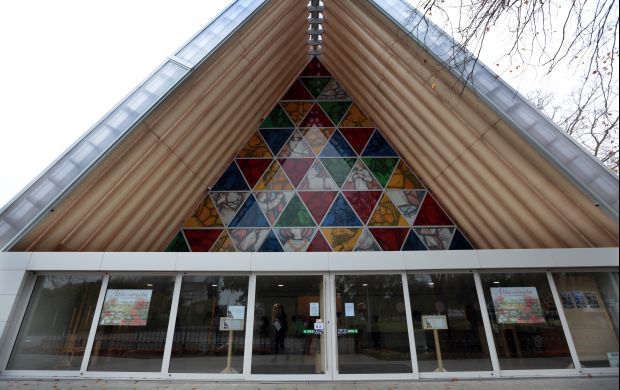 Music from this year’s Easter Service, from the Transitional Cathedral of the Anglican Diocese of Christchurch.
All Music performed by the congregation and the Christchurch Cathedral Choir conducted by Director of Music Brian Law, accompanied by organist Martin Setchell.