Insight explores the plight of the inshore fishing fleet where rising costs are threatening the local industry. The Quota Management System is credited with preserving fish stocks, but is it pushing the small inshore fisherman to the point of extinction?
Written and presented by Nick Butcher
Produced by Sue Ingram

It's more than 60 years since the death of the Dunedin-born painter, Frances Hodgkins, but Janet Bayly says we are still getting the measure of her output and her work. Hodgkins headed to Europe as a young woman, as her art had developed beyond the confines of this country. She gained a reputation as a foremost modernist artist and upon her death was claimed as a major British painter. 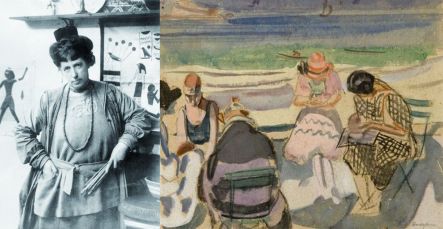 The Frances Hodgkins Kapiti Treasures exhibition is on at Mahara Gallery in Waikanae until May 2. The gallery will celebrate the artist's birthday on April 28.

Mediawatch looks at this week's news that directors of some failed finance companies may now face prosecution, and the programme talks to journalist John McCrystal who picked over one of the biggest collapses for a recent in-depth article - and picked up some lessons for the media while he was at it. Mediawatch also looks at heavy new proposals for curbing the media in Fiji; and an unexpected surge of sympathy for the poster boy of 'dirty dairying'.
Produced and presented by Colin Peacock and Jeremy Rose.

Tonga's solicitor-general (right) tells Chris about power shifts between the King, the parliament and the people which he hopes will usher in a new era in Tongan democracy.

In 1893 New Zealand became the first country in the world to give women the vote. Historian Megan Hutching (left) talks about the huge social upheaval, the battle and the sacrifices made by those who fought for women's suffrage, and the stories of those who opposed them every step of the way.

Leading the Way - How New Zealand Women Won the Vote, is published by Harper Collins.

Dougal recalls the glory days at Dunedin's Garrison Hall - home to TV gems like Beauty and the Beast and Play School - and where a certain young newsreader first faced the cameras.

Each week Trevor Reekie presents Hidden Treasures, uncovering musical gems that are often buried under tons of other stuff from here, there and over that a-way!! This week Trevor features an old gem re-shined for a new life from the late Jimi Hendrix, and the extraordinary banjo virtuoso Bela Fleck reinterpreting a classical revamp from French composer Camille Saint-Saëns.
Produced by Trevor Reekie

11.05 Ideas: The Economics of Well-Being

Helen Clark's Labour Government came to power promising to drag New Zealand into the top half of the OECD - and we're not there yet. And John Key's National Government has set the target of catching up with Australia in terms of GDP per capita by 2020. But economists as prominent as Nobel Prize winners Joseph Stiglitz and Amartya Sen are promoting the adoption of alternative measurements to GDP to gauge the economic well-being of a society. Ideas speaks to Mark Anielski - the author of The Economics of Happiness: Building Genuine Wealth; Mukesh Eswara, professor of economics at the University of British Columbia, and the co-author of a paper which argues that greater affluence can actually damage a society's well-being and happiness; and Dave Breuer the director of Anew NZ - a charitable trust working on developing new measures of economic well-being for New Zealand.
Presented by Chris Laidlaw
Produced by Jeremy Rose