7:08 Michael McCullough on the biology of forgiveness

University of Miami psychology professor, Michael E. McCullough, conducts research on the psychology and evolution of moral sentiments, including forgiveness, the desire for revenge, and gratitude. His latest book is titled, Beyond Revenge: the Evolution of the Forgiveness Instinct, and posits that both revenge and forgiveness are traits developed through evolutionary biology, rather than social constructs.

Relevant to this interview are previous discussions on Summer Nights with Dr. Kevin Dutton on the wisdom of psychopaths, and with Dr. Karen Brouneus on the Solomon Islands Truth and Reconciliation Commission.

This week on Hidden Treasures, Trevor Reekie features music that resonated with music critics in their 2013 best album choices, new music from an artist who will be appearing at Womad 2014, and a long lost re-issue from a mid 70s seminal Auckland band.

8:15 Windows on the World - The Music Industry

The music industry has changed irrevocably over the past decade, with the internet disrupting the status quo as it has many other sectors. But the story has moved on since the days when all the talk was of an industry dying from dwindling record sales. BBC Global Business host Peter Day talks to some of the players - from Moby to Yossarian; Sony and Spotify to MusicMetric.

We explore the wonders of the night sky and find out what we now know about space. Dr Melanie Johnston-Hollitt is involved in several major international radio astronomy projects, serves on national and international scientific coordination and review panels, and is a senior lecturer in physics at Victoria University, Wellington. She outlines the latest scientific research into why the universe behaves the way it does.

In the second of a three-part series, Paul Bushnell explores with leading New Zealand artists the background to their work. The composer Gareth Farr discusses his contemporary classic for orchestra From the Depths Sound the Great Sea Gongs; Kate de Goldi reads from one of her latest books for children The ACB; and ta moko expert Derek Lardelli discusses his 1995 All Blacks haka Kapa-o-Pango; and the literary critic and poet Harry Ricketts reads from his Awa Press book, How to catch a cricket match. A collaboration between Radio New Zealand and the Arts Foundation recorded in front of an audience in Wellington. 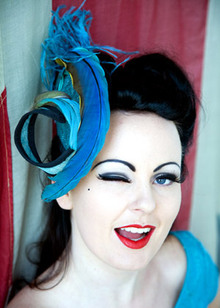 Singer of opera and vintage songs, and burlesque and cabaret performer, Lili La Scala explores the music, aesthetic, and femininity of different eras through her stage shows, always incorporating a healthy dose of vintage glamour.

Her latest performance, Songs to Make You Smile - with music by Vera Lynn, Irving Berlin and Cole Porter, among others - is coming to the World Buskers Festival in Christchurch in January.

Mark Coles plays music from around the world.