7:30 The Secret Life of Strings

Karl Steven concludes his four-part investigation of the parts of the orchestra with the enormous string family, unlocking the mystery of the heart of the orchestra and learning how violinists came to be associated with the devil.

BBC Hardtalk speaks to artist Jeremy Deller who defies all the labels and categories of the art world. He is a visual artist who can't paint, can't draw and professes no great technical skill - yet he is widely regarded as one of the most important artists in Britain today. He uses images, objects, words and real people to present a portrait of the modern world - from the factory floor to the Iraq war. What is at the heart of his creative vision?

Journalist and reviewer Kim Choe examines the latest movies, art exhibitions, theatre, and other cultural events on over summer, and looks back at the best of 2013. This week, Kim discusses the latest Disney offering Frozen; Ron Burgundy's long-awaited next outing in Anchorman 2; and Wolf of Wall Street.

Cosmo Kentish-Barnes meets Southland permaculturalists Robert and Robyn Guyton, who have planted a "Food Forest" around their house in Riverton. And Susan Murray takes the slow and dusty road to Blue Duck Station near the Bridge to Nowhere in the Whanganui River region, to discover a thriving tourist and farming business with 8,000 overnight guests staying each year. 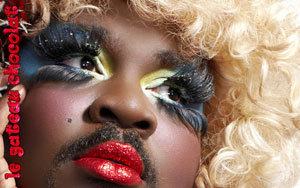 Le Gateau Chocolat is a self-described opera-singing diva with a velvety baritone, a passion for laughter and a penchant for lycra. After growing up in Nigeria and attending law school in the UK, life took a very different path for Le Gateau, after the first time he performed at a local club in drag. He now travels the world with an operatic show that challenges ideas around gender, size, race, and sexuality. Le Gateau is bringing his show I Heart Chocolat to Christchurch for the World Buskers Festival.

Paul McCartney, George Harrison and Ringo Starr recall the excitement of appearing on the radio in 1963 and '64. Back then, performing songs in the studios of the British Broadcasting Corporation was essential for any new group hoping to further their career.  The Beatles seized their opportunity and shook up the BBC.

Tonight's Soundtracks for Sunsets selection was:

And our theme music was: