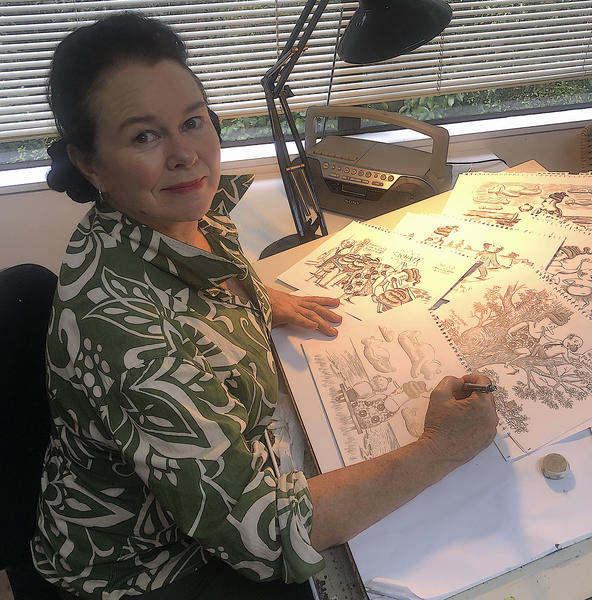 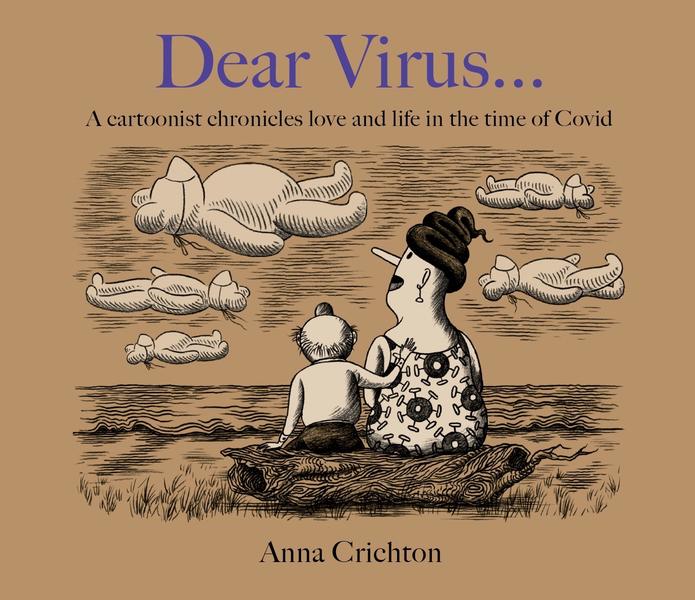 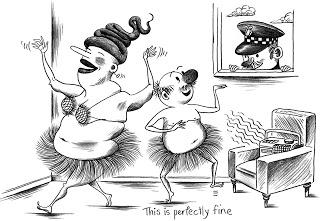 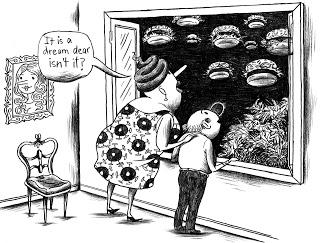 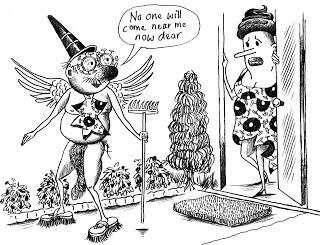 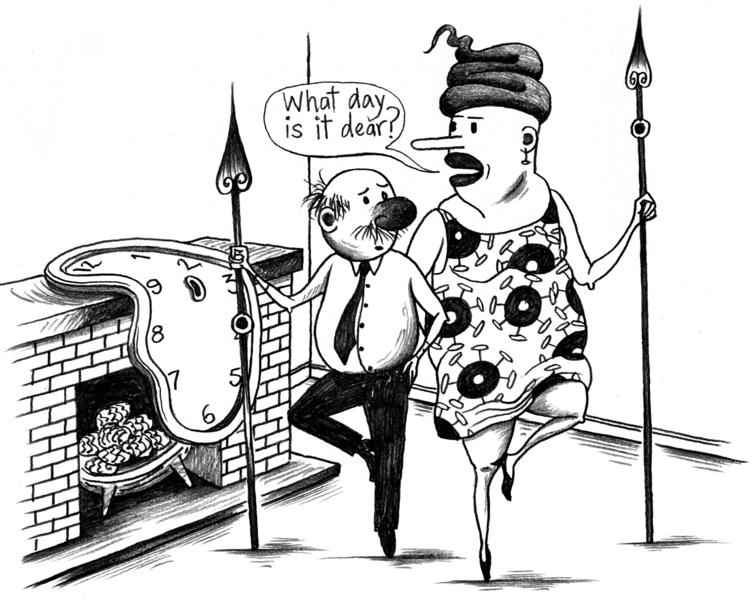 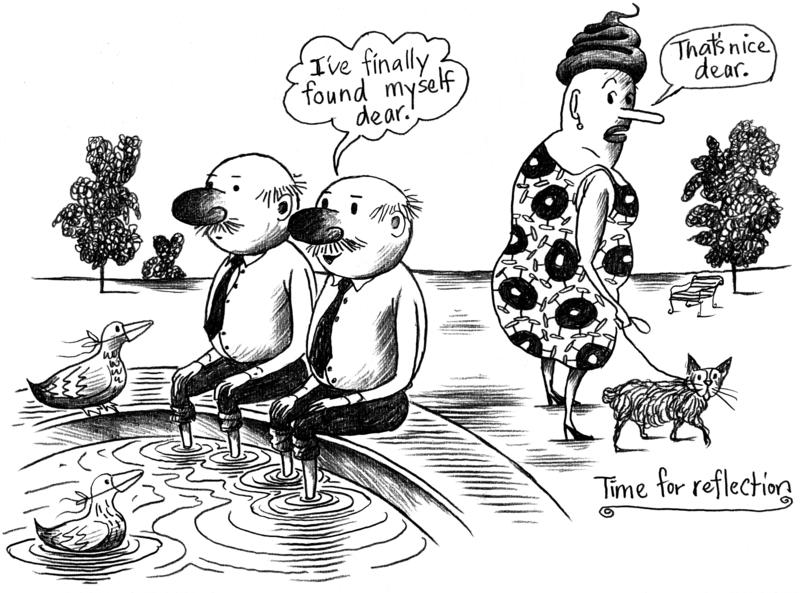 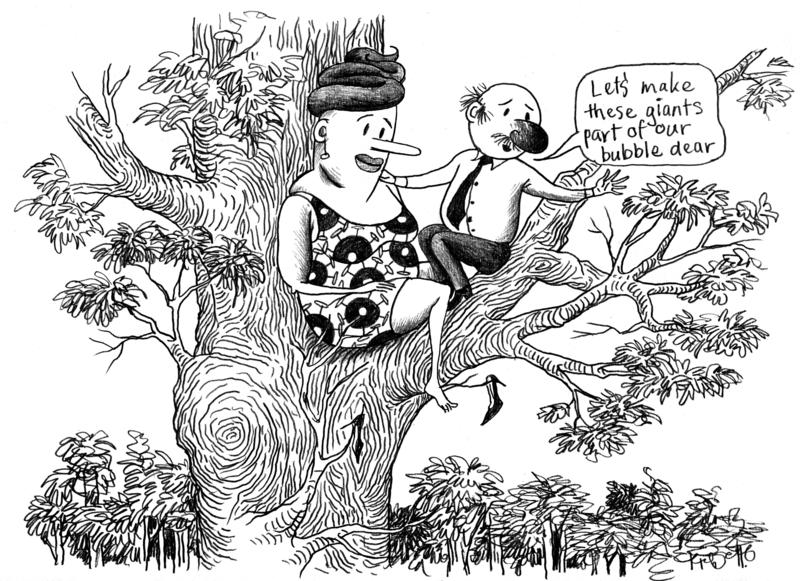 Every day of lockdown, award winning illustrator Anna Crichton documented this unprecedented period in our history through the antics of Mr and Mrs Dear.  Her affectionate cartoons became daily appointment viewing when they appeared on-line.

We are with the Dears as they join the toilet paper panic, through to making bread, and hearing birdsong rather than the noise of passing planes and cars.

Anna's now gathering up the cartoons and self-publishing the Dears' story in a book called Dear Virus.

Anna is the five-time winner - and another five times a finalist - of the Qantas/Canon/Voyager Artist of the Year media award.  Lynn Freeman asked her how Mr and Mrs Dear introduced themselves to her.

12:45 Funding cuts for the arts as local councils feel the squeeze? 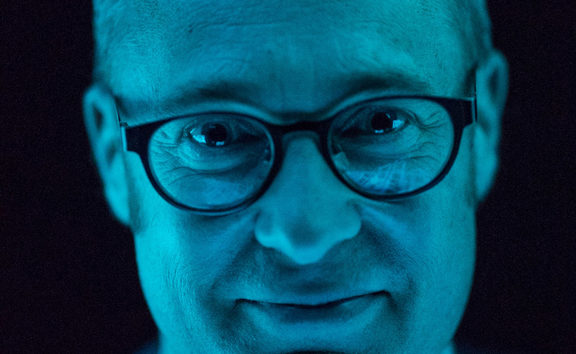 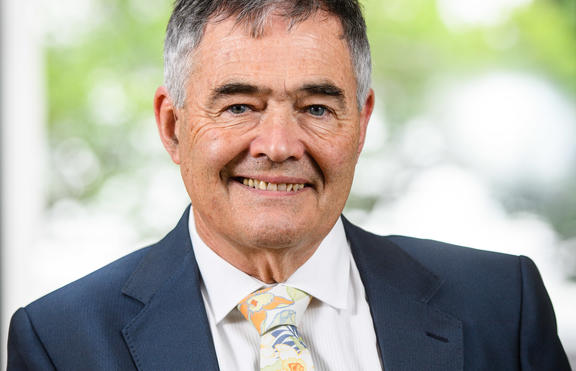 Auckland's arts community is worried that the Council's call for submissions on its emergency budget will see a substantial funding cut for arts and cultural groups and events.

Right now, local authorities around the country are under the unexpected extra pressure on their budgets because of the Covid-19 pandemic.  Many festivals and other public events had to be cancelled, postponed, or held online.

So is there a risk councils will be reluctant to help them get back on their feet? 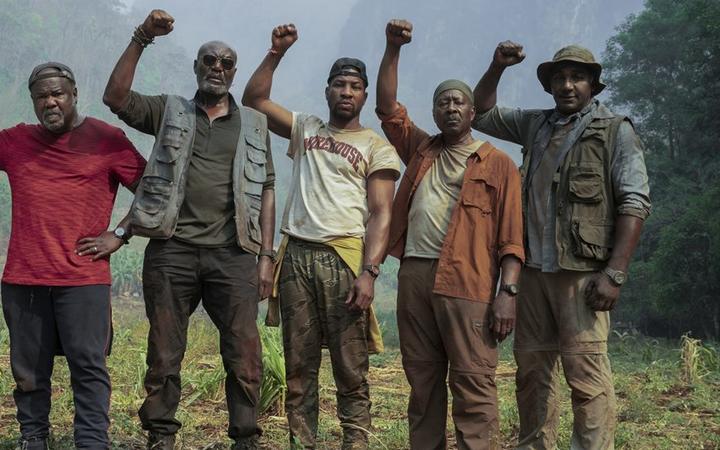 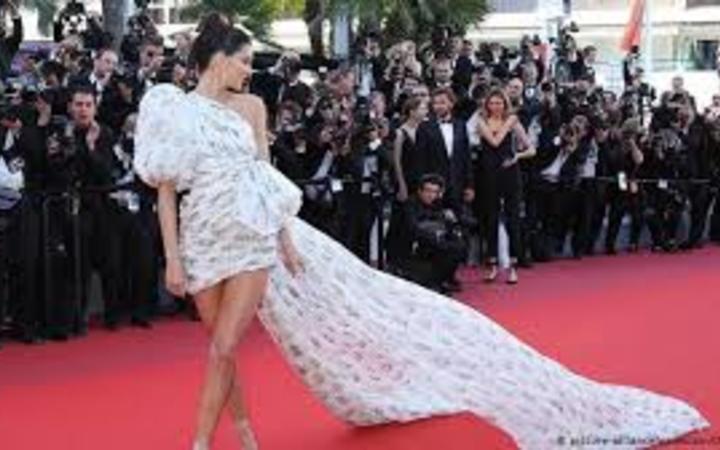 The big movie story is the Cannes Film Festival which has just opened.   And like many Festivals right now it's an on-line virtual event, thanks to Covid 19.

More interesting to us is who's making it possible.   It's a small Hamilton-based company called Shift 72.  They've become the go-to people for festivals around the world - Cannes, Melbourne, Copenhagen, and our own Doc Edge and upcoming International Film Festival.

Simon Morris talks to Shift 72 director, John Barnett, and to find out what difference it makes to movie marketing, to Jasmin McSweeney from the New Zealand Film Commission. 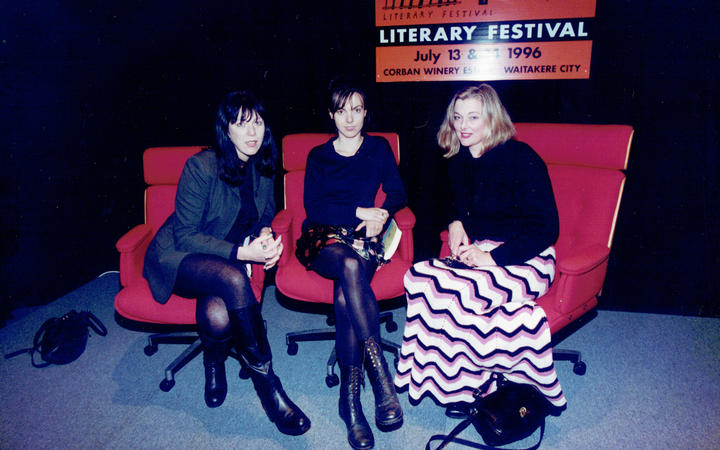 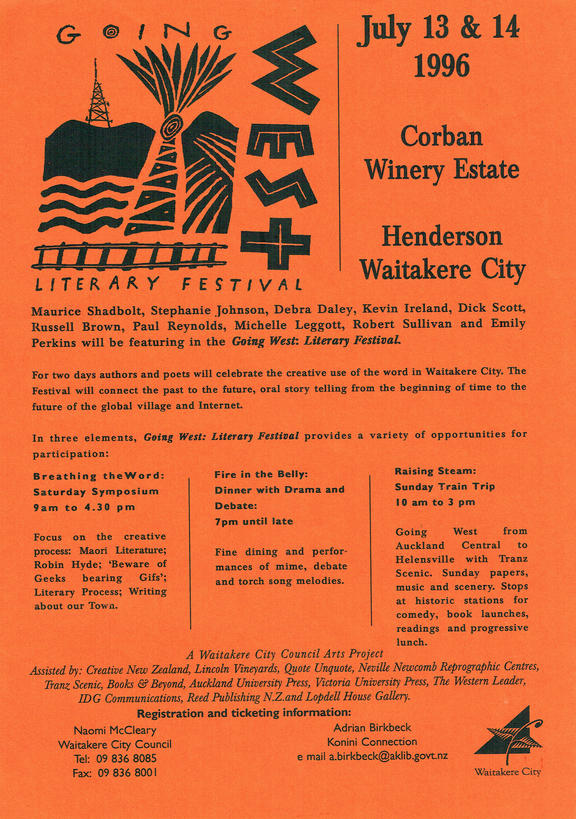 This September marks the 25th Going West Writers Festival, though it won't be the big public birthday bash the organizers had planned.

Instead, they've been poring through the archives to create an 18-week-long podcast series of highlights - conversations, performances and poetry.

The first one's just been been published.

The Festival's co-founder and current chair is Naomi McCleary, who received a MNZM in the Queen's Birthday Honours for services to the arts.

She tells Lynn Freeman they were very reluctant to pull the plug on the live event. 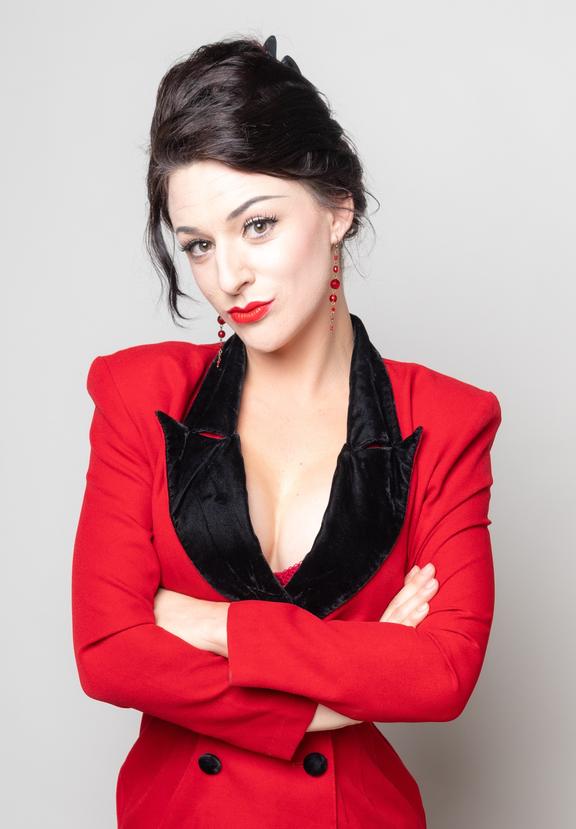 Before she arrived at Palmerston North's Centrepoint Theatre as Associate Director, Lizzie Tollemache came from the less "respectable" side of the business.

Her company's name summed it all up - Rollicking Entertainment, borrowing from a background in sideshows, stunts, improv and children's entertainment.   In other words "Carnie" through and through!

Lizzie's about to go on the road with a new show called Kitchen Chaos!    She tells Lynn Freeman what appealed to her about Carnie entertainment.

Her Laugh Track picks include Garfunkel and Oates, Flanders and Swann,The Kransky Sisters and Nish Kumar and Rachael Paris. 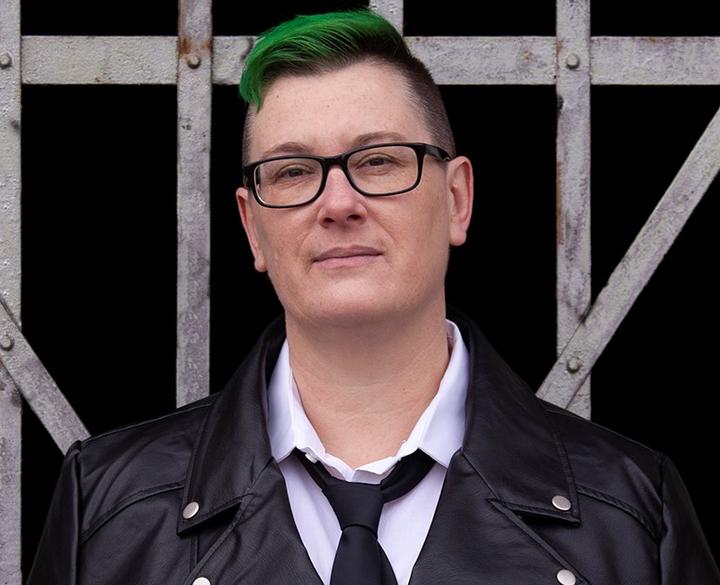 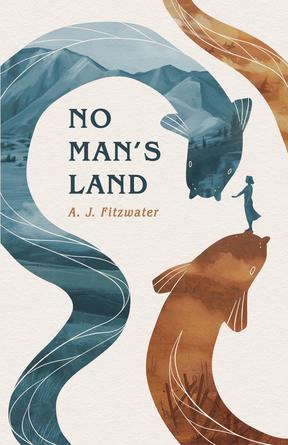 A young woman joins the Land Service to fill the shoes of her twin brother who's off to the Second World War.

But she finds more than she bargained for when she arrives at the North Otago farm.

Christchurch writer A. J. Fitzwater comes from a fantasy/sci-fi background, having won not one but two Sir Julius Vogel Awards for speculative fiction.

In conversation with Lynn Freeman, A J Fitzwater describes the new book No Man's Land as "historical fantasy".  It's published by Paper Road Press. 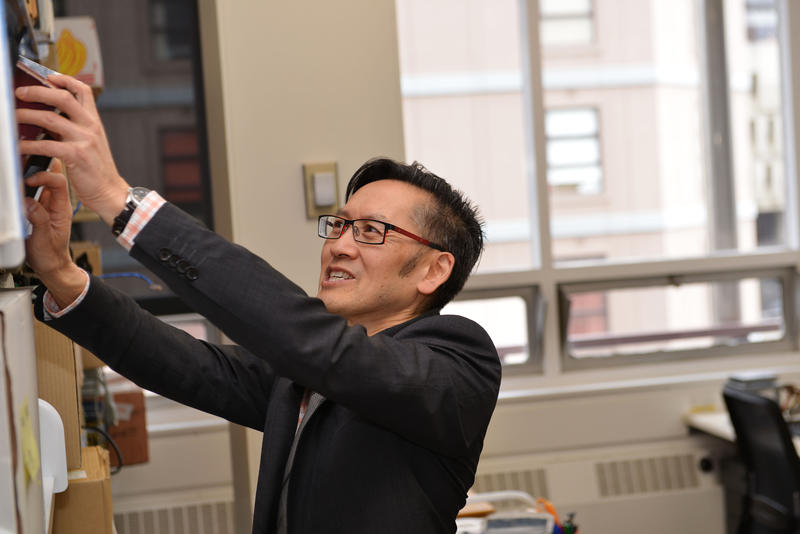 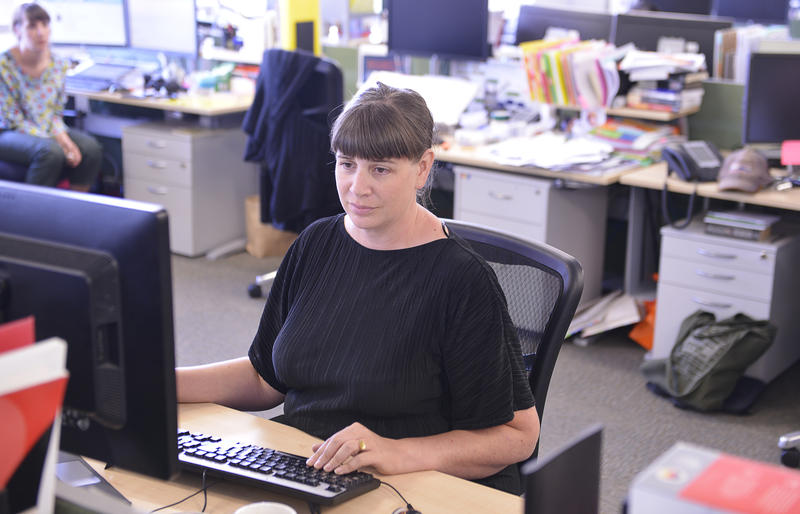 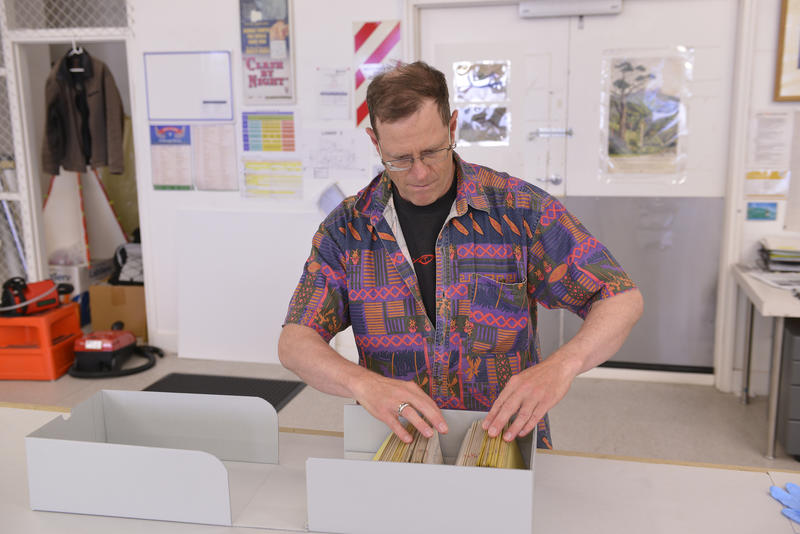 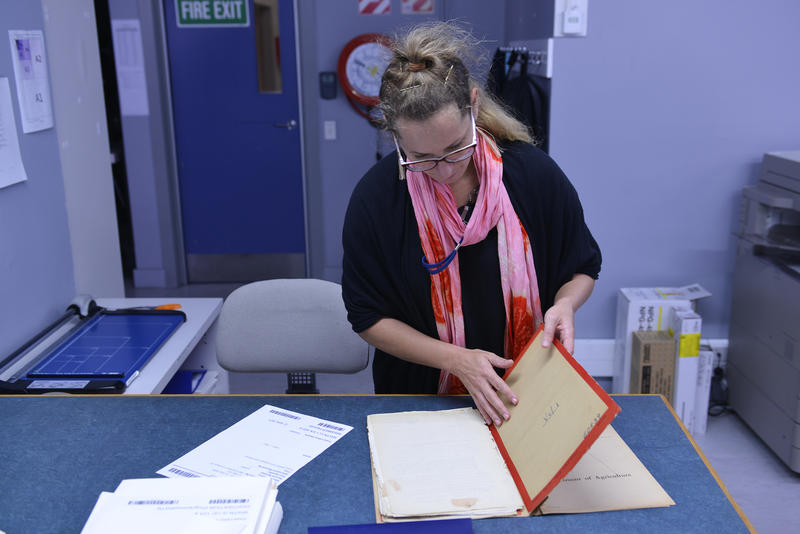 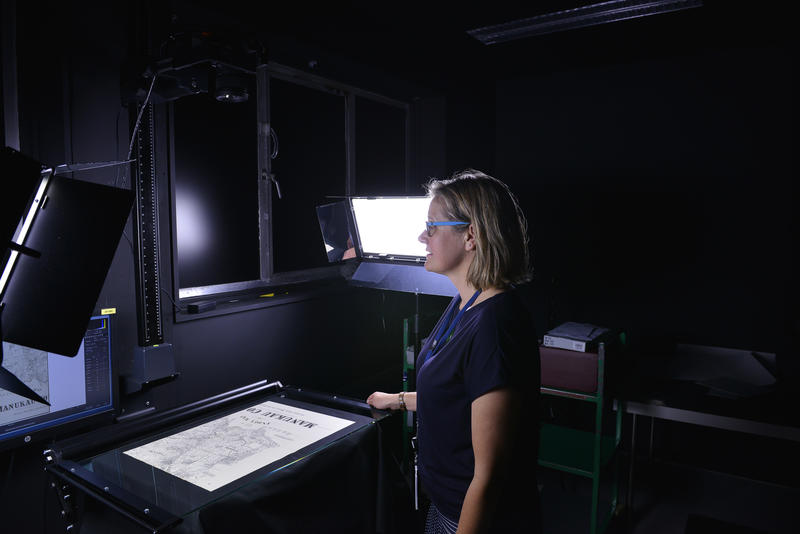 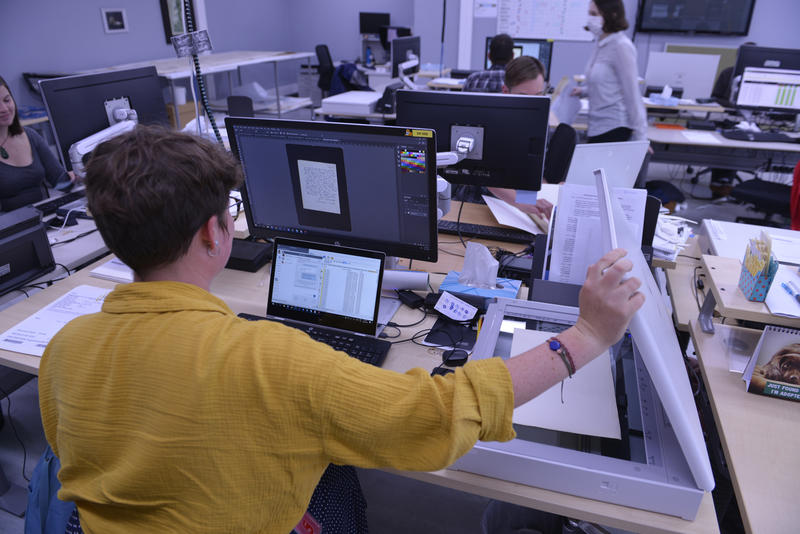 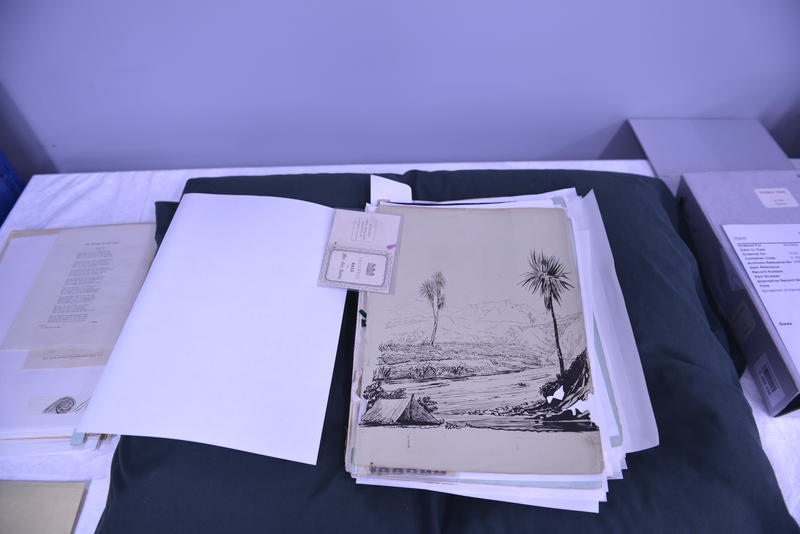 Inside the scrapbook. Credit Terence Davidson 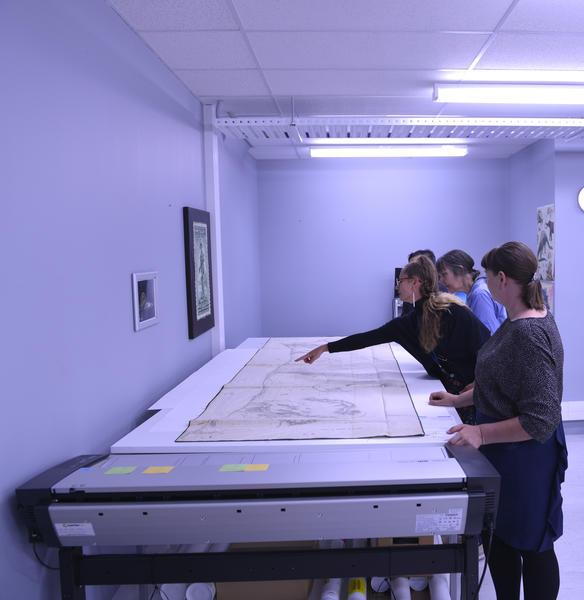 In the second part of our trip into the National Library vaults, we see where Archives New Zealand house the bulk of the millions of items entrusted to their care.

Last week we explored the storage areas, and where damaged documents are repaired.

Today we find out about the intricacies of digitizing fragile and sometimes very large documents.

But first Stefanie Lash introduces one of the biggest digitization projects undertaken so far:

A light-hearted political comedy series about Dick Costello the grizzled, old-school Minister of Education and eager beaver young teacher Beth Wilson who he hires to be the "face of education"