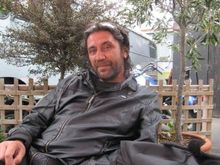 Lyttelton’s Volcano Radio offered Ben his own poetry show. The extraordinary music culture and eclectic vibe of the port town suits him well.

In his poetry, Ben Brown refers to Jake the Muss of Once were Warriors fame. He is crooked from a motorbike accident which paralysed his right arm. He looks wild and has a history of excessive drinking but people listen when he speaks. The Lyttelton poet is respected throughout the country.

Spectrum’s Deborah Nation joins Ben at Samo’s – where he downs seven coffees a day at Te Porthole, and for a live poetry performance at Tommy Changs.