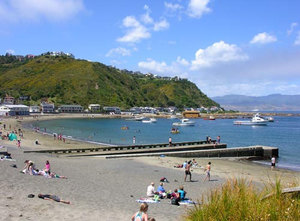 Off the boot of Italy lies the tiny volcanic island of Stromboli.

Violent eruptions like the sea quake in 1930 which generated 30-metre waves and a decline in the island's economy have sent periodic waves of its people - 'Strombolani'- to many countries including New Zealand.

Wellington has had its own community of Strombolani for about 100 years. It was the recent death of a leading figure which rallied others to realise that their history was slipping away before their eyes.

The 'Strombolani Connection' was formed with an initial plan to have a get- together. However things snowballed producing a reunion at parliament with 450 participants from throughout New Zealand, an exhibition  and a book about Strombolani families "Famiglie Strombolani in Nuova Zelanda".

In the 15 years since this programme was first broadcast,  the group has seen a continuing demand for its book.  An updated edition has been printed. The 'connection' has since extended to Australia and it has revived third generation Strombolani who didn't feel Italian at all.

"Just because you are born here doesn't mean to say that a part of you isn't still rooted in that tiny Mediterranean island" says Ginette Toscano Page, a founding member of the 'Strombolani Connection'".

For Spectrum, Jack Perkins accompanies several Strombolani back to their childhood home of Island Bay.