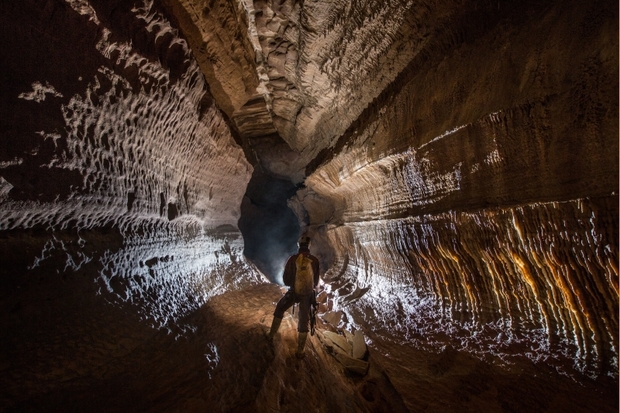 If you want to visit Armageddon, be prepared for a bit of a hike.

It takes around four hours of hard bush walking to get to the entrance to Armageddon Cave, just north of Punakaiki on the West Coast of the South Island. Just a short distance away is the better-known Fox River Cave system in Paparoa National Park and cavers have long suspected that the two are connected. As yet, no link has been found. 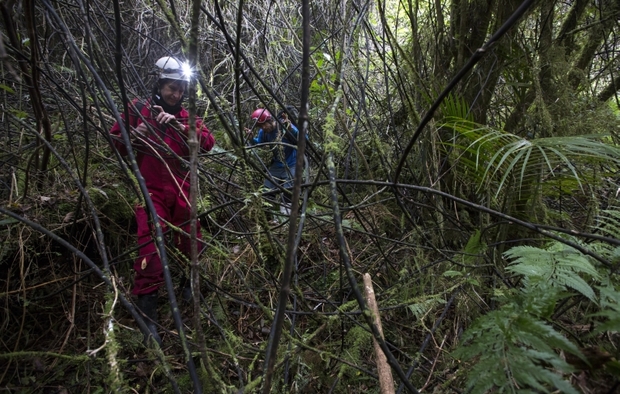 The four hour trek to the entrance of Armageddon is not a well-maintained trail. Photo: Neil Silverwood.

Photographer Neil Silverwood grew up in a caving family and started going underground at the age of eight.

"My dad was a caver and he'd drag me out. Because I was tiny he'd force me down through all the squeezes and digs."

But he didn't catch the caving bug until his teens.

"I ended up on an exploration trip and we were the first people into a new cave system...and I was rapt, you know."

To take the first footsteps through there, to put the first light in there. I knew that was what I wanted to do.

It was in the 1970s that cavers stumbled across the entrance to a large limestone cave they subsequently named Armageddon. It's isolated location meant that it had remained a secret although Maori usage in pre-European Aotearoa/New Zealand is unknown. Serious cavers and casual explorers mostly left it alone and focused on the more accessible Fox River cave system.The opportunity was there to be the first to find a way to link the two. Neil decided to have a go and put together a team to try and make it happen.

Arvid Hans is a German scientist living in Wellington and according to Neil, he lives, sleeps and dreams caving. The opportunities offered by New Zealand's large collection of caves versus its small community of cavers appeals to him.

"So you have really a chance to find new stuff here which is exciting about.But I love the whole activity, everything about it. If you go down in that black hole and shine light on a new passage, it's just amazing."

West Coast farmer Warren Smith has been caving for a long time but these days he doesn't manage to get out as often as he'd like to.

"The really good thing about caving is the other cavers. They're very family oriented. We'd go on these amazing week-long trips with cavers and kids.Kids are kayaking and caving and climbing and it's just a really good thing to get off the farm and go and do."

Lauren Kelly is new to caving. She also points to the people as the reason why she likes caving and says since she began going underground a year or so ago she has acquired a whole new bunch of friends "whether I wanted to or not." 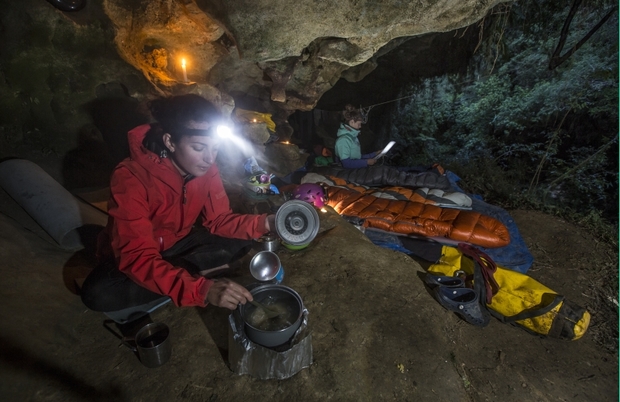 At night the cavers bivvy beneath a natural rock overhang. Photo: Neil Silverwood. 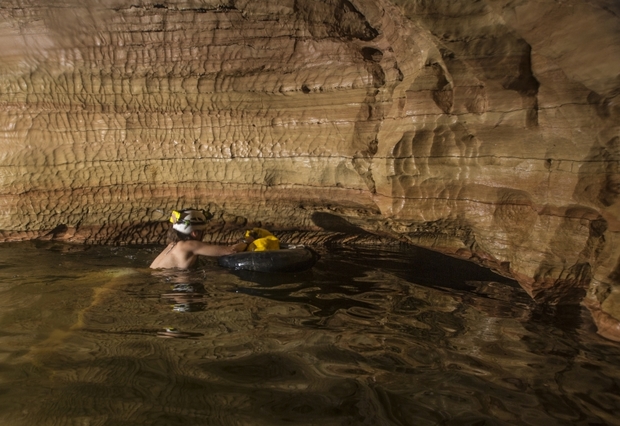 Neil Silverwood estimates their chances of successfully finding the passage through to Fox River to be maybe one in ten. He says cavers have to be optimists by nature.

"You just have to believe... this is going to be the day we get it."

There's a lot of hardship you've got to go through with caving. You just have to put that to the back of your mind and focus on the goal.

In late 2015 the team made their way to Paparoa National Park and bush-bashed to the entrance to Armageddon. Spectrum sent them on their way with a small digital recorder and asked them to document their attempt to find the link that had so far eluded others.