I dived and walked  and boated  all round the island as a kid, and didn't  know these  wrecks were here; Kurt Bennett 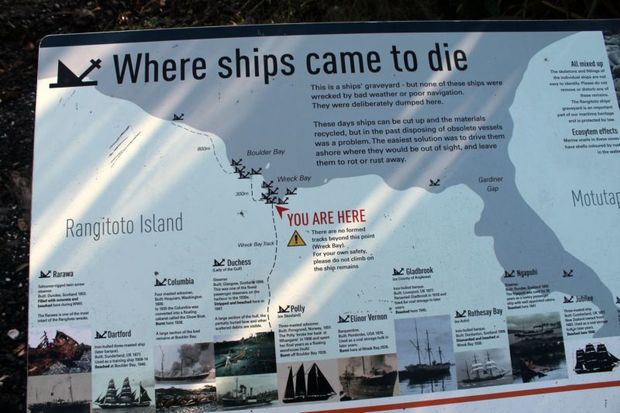 After decades of wind, rain and salt, the abandoned ships round the “back side” of Rangitoto Island are disappearing fast. Thirteen ships were scuttled on the rocky northern side of the island from the 1890s to the late 1940s, mostly at Boulder Bay, now nicknamed Wreck Bay. 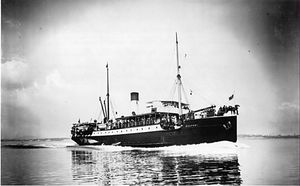 The Steamer Ngapuhi in 1908. She was wrecked on Rangi in 1941. The Navy wanted her engine for the war effort. Photo: Sir George Grey Special Collections, Auckland Libraries 7-A15743

Today little of the vessels remain, but many bits of the boats were put to good use in the island’s more than one hundred baches. Marine archaeologist Kurt Bennett has tracked some of the salvaged material down.

I’ve been across to Rangitoto in the company of Kurt to retrace his journey, and also with the chairperson of the Rangitoto Island Historic Conservation Trust Elizabeth Andrew.

The Rangitoto baches were built in the early years of the 20th century, but since 1937 none of the owners have been allowed to modify them. Most of the buildings have been torn down and now only 37 remain. Elizabeth’s trust has restored two of them and is working on a third. Eventually they'll be rented out to the public. 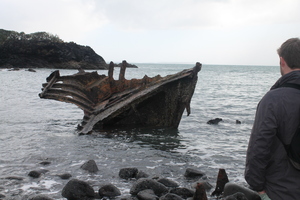 Kurt Bennett and the remains of the steamship Ngapuhi at 'Wreck' Bay. Photo: RNZ David Steemson

In 2015 it’s a hard, jagged 35-minute walk to  see the ships at Wreck Bay across the unforgiving scoria. We walk up on to the rocky beach, and are confronted by the grubby remains of the steamer Ngapuhi driven ashore here in the 1940s.

Such is the strength of the sea on this coastline that the scoria boulders have been smoothed and now look like pumice. At low tide the steering mechanism of the Ngapuhi can still be seen.

Up at the high tidemark, and jammed into rocks and boulders are the sad remains of ships… massive bleached wooden beams, with giant spikes impaling them, huge rusting slabs of steel, some covered with sea life.

Kurt takes us to see ship’s doors in one of the baches at Islington Bay. We spot the one on the outdoor long-drop. The doors came from the passenger steamer Rarawa scuttled on Rangitoto in 1941. 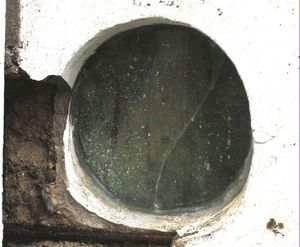 Another bach has porthole glass built into the chimney to let in light, and all over the island ships’ tanks are still used for water, or to store firewood.

Apparently the Rangitoto holidaymakers used to make day trips here to Boulder Bay, and picnic, while the men  scavenged or chopped up the wood from the hulks for firewood. Oregon pine burns very well.

Kurt Bennett spent many days doing his research on the island, and his findings are now part of his Master’s thesis at Flinders University in Adelaide. He is putting his marine archaeological skills to work at Lyttelton, during the port’s expansion work.

The future of the ships at Boulder Bay seems certain. They'll disappear altogether over the next few decades. And if the Department of  Conservation gets  its way the same thing will happen to the baches. However DOC's decision on that is under review by the government.

David Steemson talks Kurt about his quest to record the whereabouts of ships scuttled on the island before they vanish. 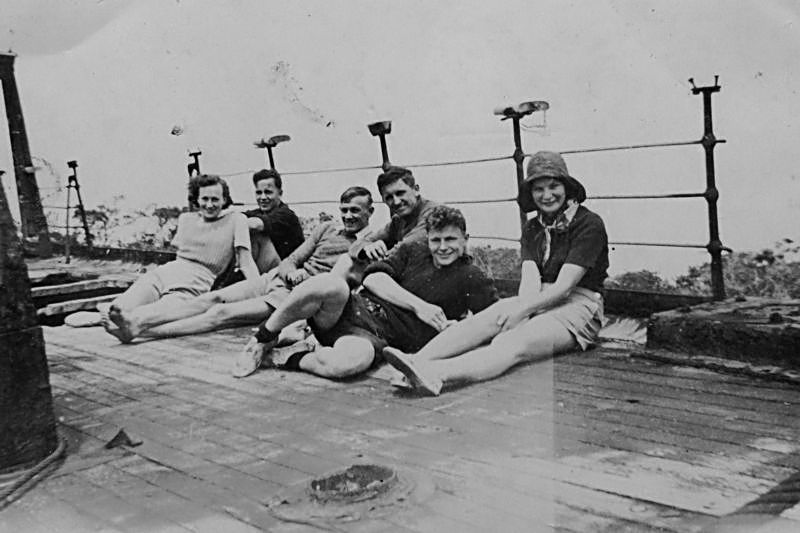 Audrey Turner ,far left, with friends. A day out on a wreck, probably the Rarawa, October 1944. (PHOTO: Courtesy The Turner Family) 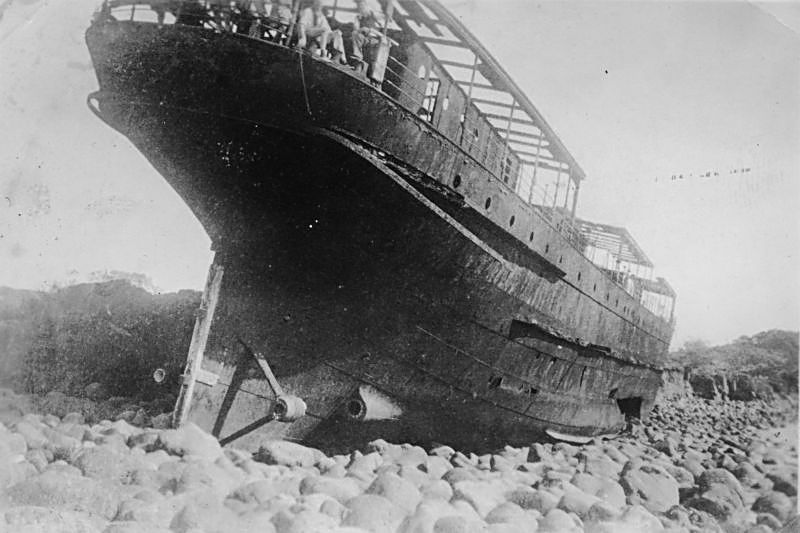 The Rarawa up on the rocks in Boulder Bay where she was scuttled in 1944. (PHOTO: Courtesy The Turner Family) 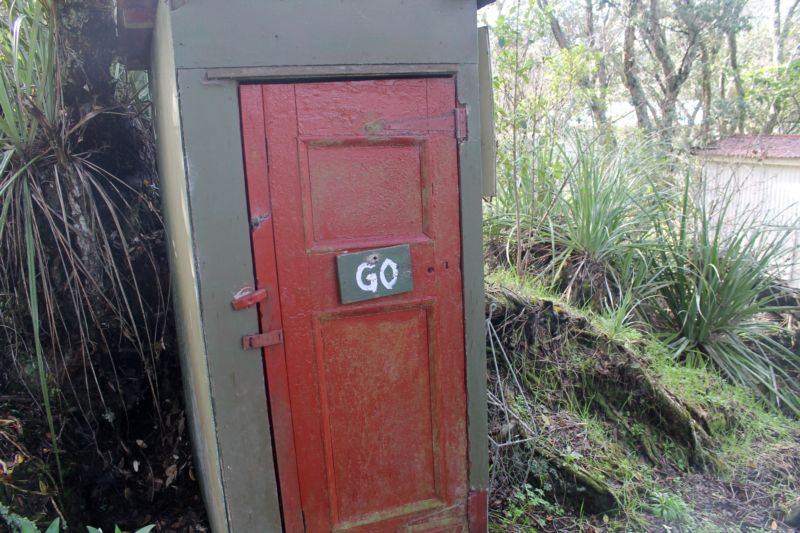 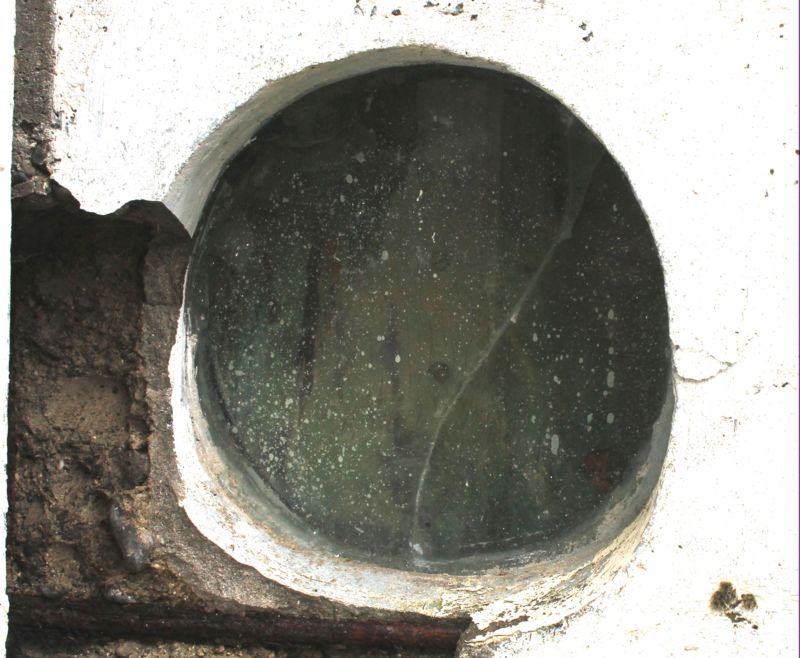 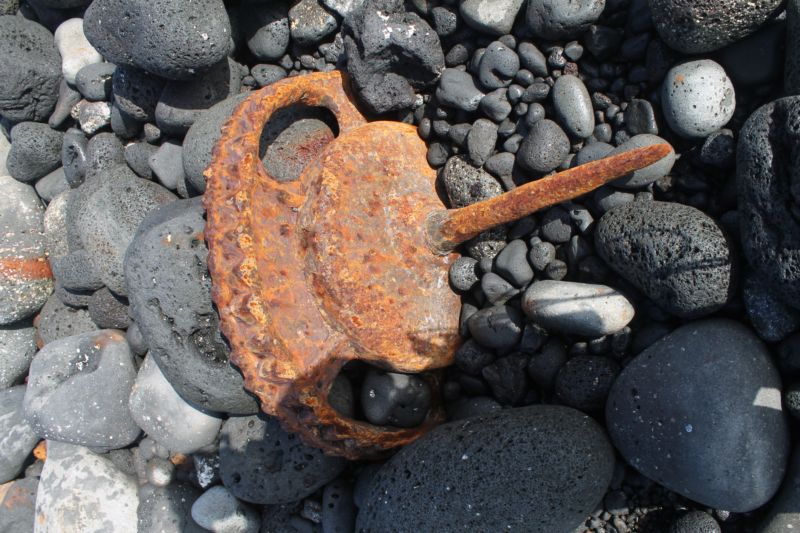 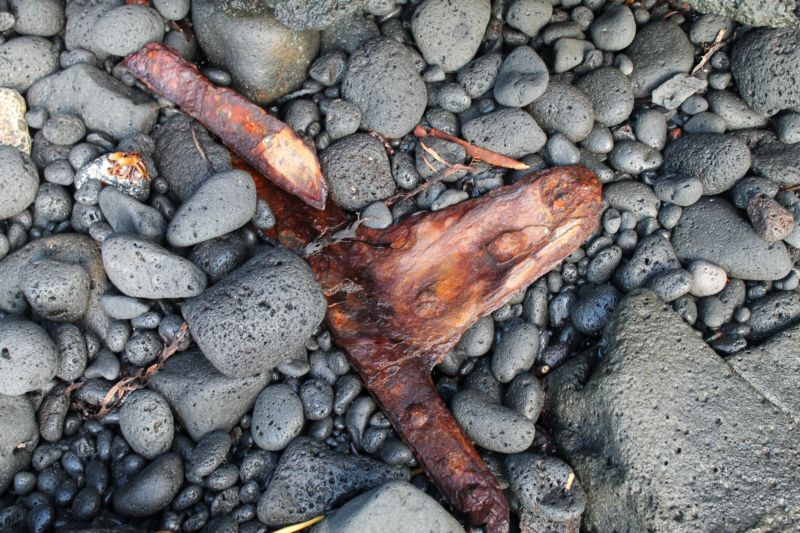 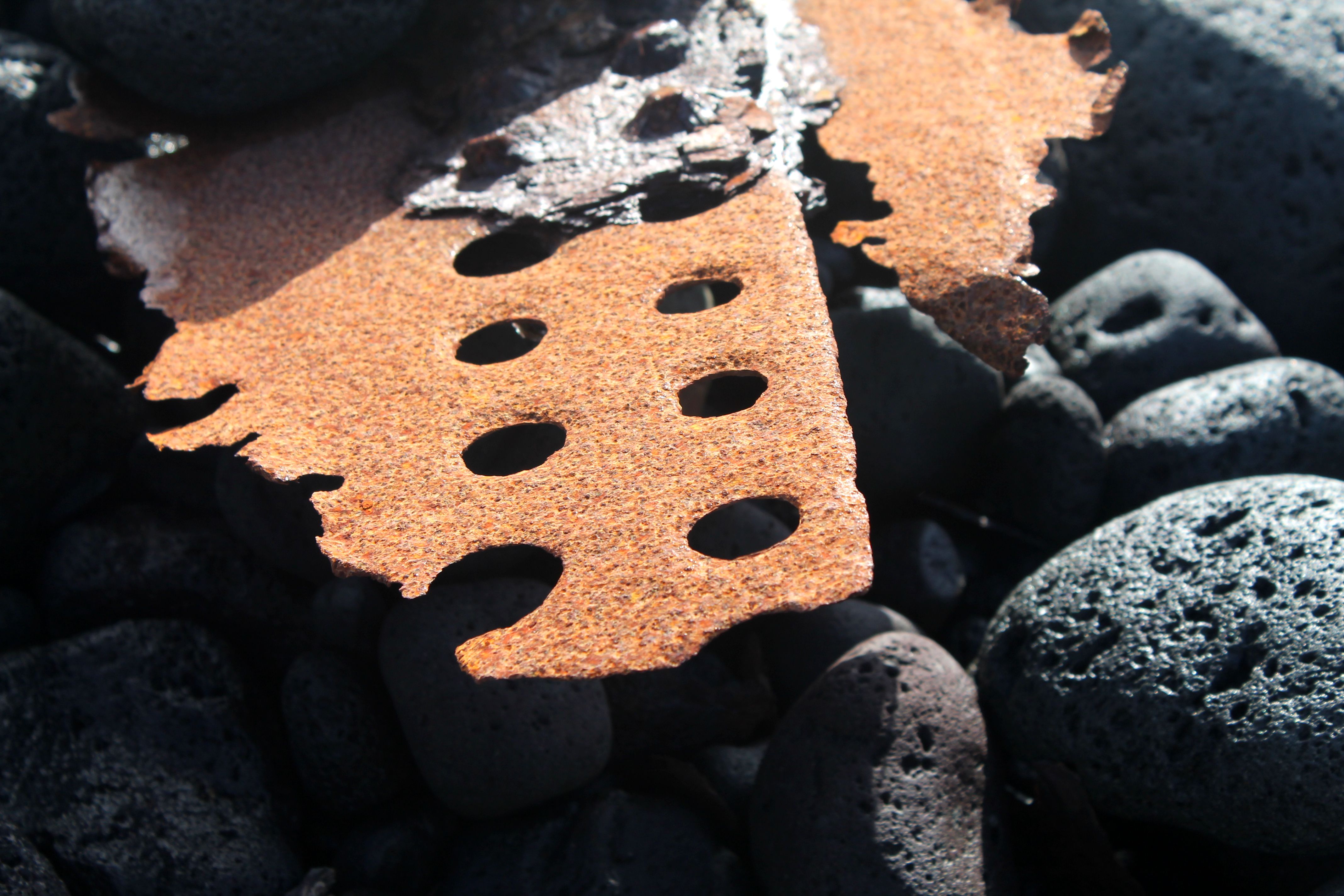 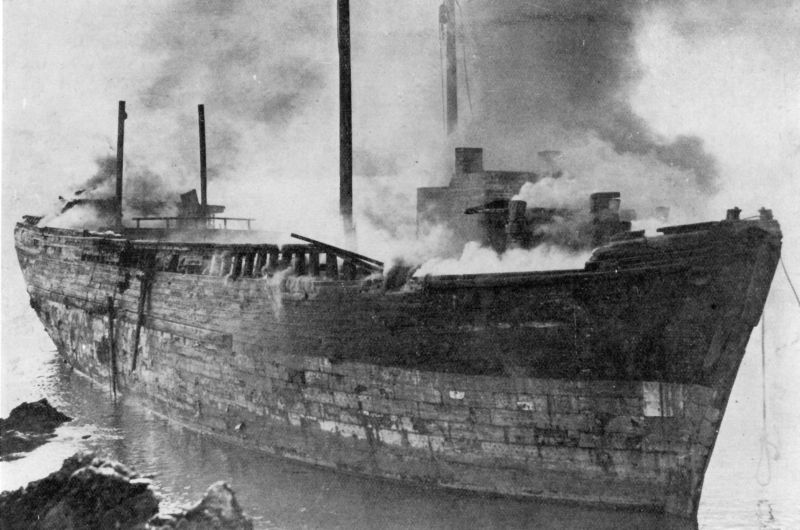 The Elinor Vernon was filled with waste paper and kerosene and then set alight in June 1928 on Rangitoto (PHOTO: Sir George Grey Special Collections. Auckland Libraries 7-A15082) Kurt Bennett and the remains of the steamship Ngapuhi at 'Wreck' Bay. (PHOTO: RNZ David Steemson) 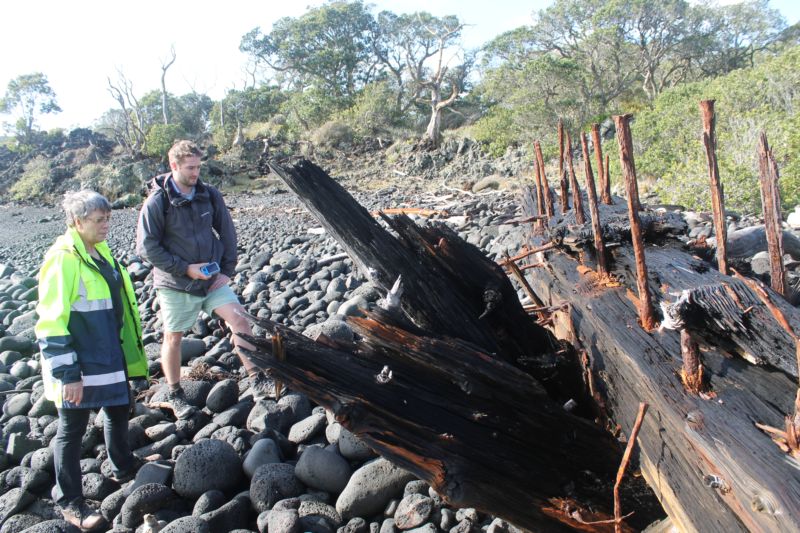 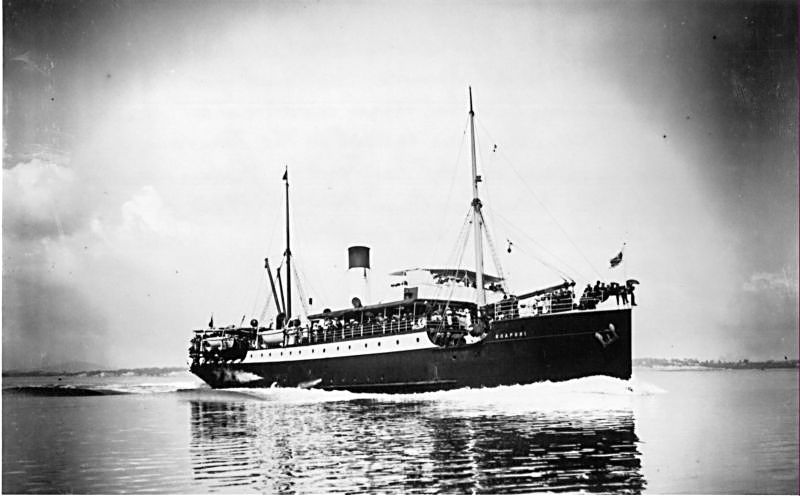 The Steamer Ngapuhi in 1908. She was wrecked on Rangi in 1941. The Navy wanted her engine for the war effort. (PHOTO: Sir George Grey Special Collections, Auckland Libraries 7-A15743)