A searing hot Marlborough day melts the tarmac in the lush vineyard-filled Waihopai valley near Blenheim. At the gate of the Waihopai surveillance base, hard-line protestors unfurl their banners and wind up the volume on their portable CD players: the annual protest against the base is underway. 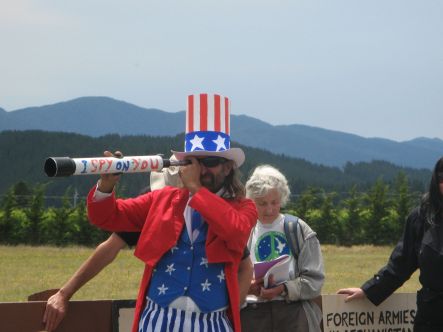 A protestor dramatises the United States role in electronic surveillance at Waihopai.

Songs, publications and videos now portray the historic moment in 2008, when 3 men crawled through the night and took a sickle to one of the two gigantic balloons which, to this day, stand surreal in the landscape. The trio were inspired by their Christian faith, their belief in peace and graphic images of war in Iraq. 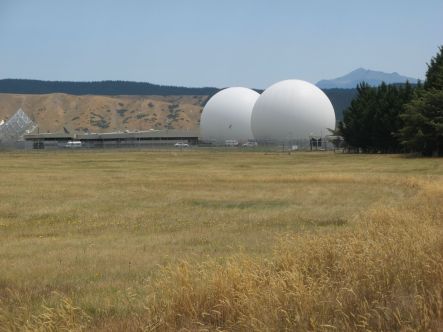 The balloons are known to protect satellite dishes used for surveillance purposes by the United States of America, reaching out to the Pacific rim and beyond. 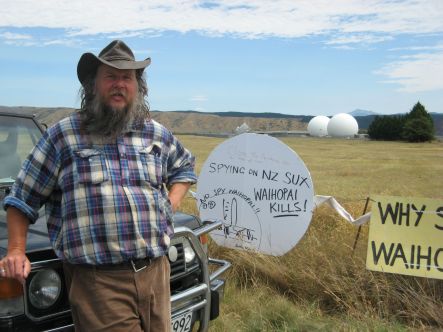 Adrian Leason, one of the 3 who slashed the Waihopai base balloons.

With the world watching, the 3 men were imprisoned for a period and eventually acquitted without charge. 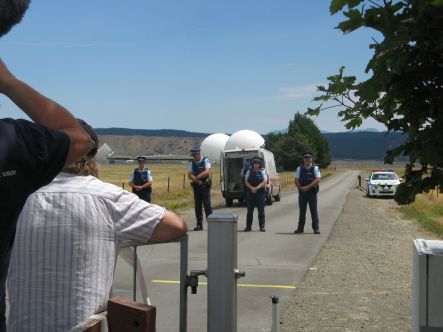 Police confront protestors who later jumped the gate and entered the Waihopai base perimeter.

This year organic farmer, teacher and family man Adrean Leason is back at the scene, and tells Spectrum the extraordinary story of how he, Dominican friar Peter Murnane and Hokianga farmer Sam Land, their carefully formed plans in tatters, were still able to penetrate the perimeter wire and reach the balloons, their efforts earning them fame and notoriety.