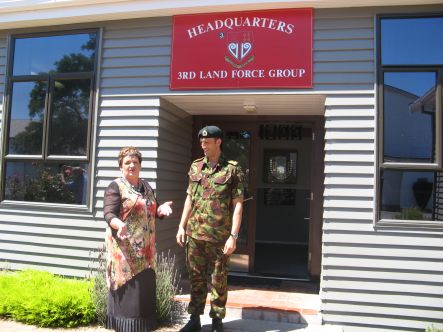 It's his first day back on duty at Burnham Military Camp for Company Sergeant Major Paul Mumm since returning from Afghanistan. After 5 months at the kiwi base, in the Hindu Kush mountain region, Paul, with wife Jen at his side, is feeling the yoke of responsibility lifted, knowing he has successfully returned a hundred and forty military men and women home to their families safe and sound.

Carol Voyce receives a hug and a kiss as she greets the officer she has liaised with closely throughout his 5 month stint. Carol, the Defense Force's recently awarded Person of the Year, knows better than most how a well informed and resourced family back home ensures that a soldier in the field is free of distraction. Pre-recorded bedtime stories for children, flowers for a wedding anniversary, and a supply of wood for the winter, are some of Carol's recommendations to servicemen heading off overseas.

Spectrum's Deborah Nation joins Deployment Service Officer Carol Voyce, who works as the first line of communication between soldiers and their families, and Warrant Officer Paul Mumm and his wife, at Burnham Military Camp, just south of Christchurch. 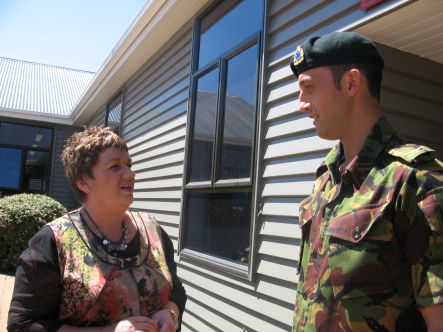