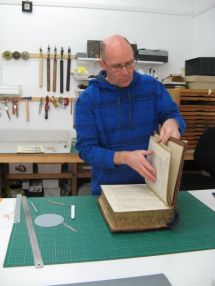 Paul Taylor is a book conservator. It's all very hands-on as he works in his studio on Auckland's North Shore. He can spend days or weeks working with one particular book, removing age and water spots, rebuilding damaged bindings, repairing leather covers, and even retooling exterior lettering in gilt.

Paul came here from Britain a little over four years ago and is one of only four people doing the job in New Zealand. Initially he worked for Auckland City Libraries but struck out on his own last year with his wife Terry Bowden as business partner.

Paul says as a conservator he must understand the chemistry of what he does, as well as having the eyes of an artist and craftsman.