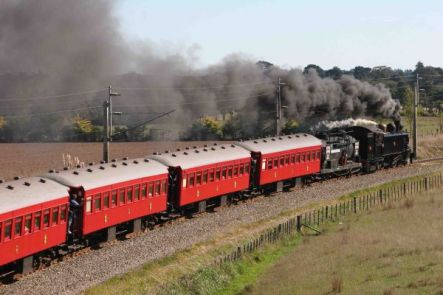 There's something about a steam locomotive! You only need to ride one and hear the car horns and cheerful yells to realise it. People stand and grin from roadsides and footpaths, keep pace in cars, hang waving out of house and office windows, gather on domestic front balconies kids in their arms - often to be rewarded by a long, loud whistle.

They're noisy, they're uncomfortable, they're dirty, they're polluting. But people turn out in their hundreds to ride these snorting dowagers, now making a comeback after modern jet and road travel shouldered them aside in the '50s - thanks to teams of enthusiasts around the country dedicated to their restoration.

One such group is Paekakariki's Steam Incorporated, organiser of this trip.'You'd think it was alive wouldn't you?' one of the drivers told Spectrum's Briar Whitehead through a blast of steam on a recent excursion to Wanganui from Paekakariki. 'Diesel can't do this for you!'