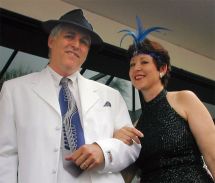 Hanna Frederick grew up in communist Hungary. Howard Frederick was a child in post-WWII America. They met in a lift at the American University in Washington DC. Howard proposed to her after she sang a Romani song. Both have lived in Eastern Europe, Germany and the US and moved to New Zealand ten years ago. Both get annoyed at what they see as 'the socialist state of affairs' and the propagation of mediocrity in New Zealand, yet they love the people and the country's beauty.
Hanna has a PhD in chemistry, worked for the New Zealand government and has her own gourmet chocolate business. Howard studied communications, traveled to the Middle East working on the two nation theory between Palestine and Israel, and teaches innovation and entrepreneurship at the Unitec business school.
In Gypsies and Chocolates, Sapna Samant chats with Hanna and Howard Frederick about their life in Aotearoa New Zealand.