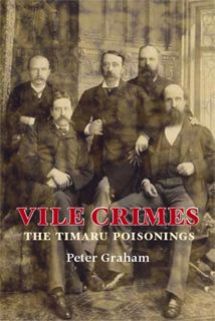 Retired lawyer Peter Graham walks the streets of Timaru and re-creates the story of high society crimes that once shook the South Island province.
Born and bred in the area, Peter Graham spent 30 years as a Crown Counsel and barrister in Hong Kong, before returning to run an apple orchard and to research the story of Tom Hall Junior.

In 1886 the people of Timaru were jolted by the news that Tom Hall Junior, a prominent local businessman and nephew of the former New Zealand Premier Sir John Hall, had been arrested for the attempted poisoning of his wife Kitty. Shortly afterwards he was charged with the murder of his father-in-law Captain Henry Cain.

The Hall Poisoning Cases on the 1966 Encyclopedia of New Zealand