South of Heaven: A History of New Zealand Extreme Metal

Much more than just Satan, gore, and loud guitars

Navigation for South of Heaven: A History of New Zealand Extreme Metal

It isn’t accommodating and it definitely isn’t timid, but as the bands explain, extreme metal is much more than just Satan, gore, and loud guitars.

South of Heaven: A History of New Zealand Extreme Metal travels back to the birth of this country’s most challenging and confrontational music scene in the early ’90s, and visits New Zealand extreme metal in 2014, where a hidden realm of homegrown bands reap worldwide acclaim.

South of Heaven: A History of New Zealand Extreme Metal 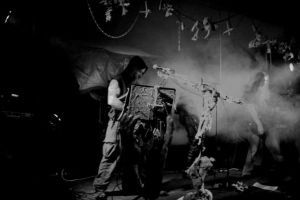 To whet your appetite for South of Heaven: A History of New Zealand Extreme Metal, here is a selection of Radio New Zealand back-catalogue features about metal music:

Leader of one of the 'big four' of thrash metal - alongside Slayer, Anthrax and Mustaine's former band Metallica - Dave Mustaine traded addiction and rock'n'roll excess for religion. Megadeth are going strong, winning over a new generation of Thrash fans. From October 2009.

Auckland death metal band released its fourth album, Vermis, to rave reviews the world over, and signed to legendary US metal label Relapse records. From November 2013.

Dying of the Light

Industrial doom duo Dying of the Light whose E.P. Monolithium caught the ear of fans at home and abroad. From December 2013.

New Zealand's metal landscape is littered with bands taking extremity to its nth degree, but Wellington five-piece Red Dawn discuss why listening to Iron Maiden is more important than anything you'll ever learn in school, and why operatic vocals are 'killer'. From December 2013.

Wellington Black Metallers talk about the album Down in the Cold of the Grace and their distinctive take on the genre. From April 2013

The band email signature reads: "heavy metal music in the true style of the 1980s", Wellington's Razorwyre tell of double kicks and leather lungs on their debut album Another Dimension. From September 2012.

Beastwars Live at The Kings Arms

Wellington sludge-metallers belt out a set of songs live at Auckland's Kings Arms. From March 2014.

They are not 'extreme' - in fact these days it sounds just like 'rock' - but they are the granddaddies of metal, and quite hilarious. We buttonholed Ozzy and the band at a listening session for the album 13, ahead of their first NZ concerts since the Great Ngaruawahia Music Festival in January 1973. From April 2013.