James Ashcroft’s (Ngāti Kahu and Ngāpuhi)  debut feature film Coming Home In The Dark hasn’t even hit New Zealand cinemas yet, but the director has already been shoulder-tapped for at least one big budget Hollywood flick.

Based on a short story by Owen Marshall, Coming Home In The Dark follows a teacher that is forced to confront a secret from his past when his family encounters two malevolent drifters while on a road trip.

“The short story is a very dark piece and that was why it was so arresting and made such an impact on me when I did read it for the first time,” Ashcroft told Saturday Morning.

“But until we found the material to get underneath the short film to have it speak about something bigger and more personal, more egocentric to Aotearoa … it sort of sat there dormant for a long time.

“And when we did bring in those aspects of the long shadow of the failure of our state institutions, it started to write itself.” 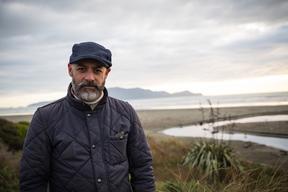 Co-written with Eli Kent, the film looks at both sides of the fence and shows how even good people can do bad things, Ashcroft says.

“I’ve always been attracted to that grey space, between night and day, between black and white, and I think all of us, we all grapple with trying to reconcile with those dark and light aspects of ourselves, not necessarily to this extreme, but I don’t see the world in black and white.”

He says genre literature and films have the ability to confront tricky subjects in way that could still be thrilling or entertaining, without having to “dumb down” characters or storylines for audiences.

“I want people to relate to these characters, I want people to be drawn into all of their journeys and what they do and question their allegiances that they may have had at the beginning of the film to how they are at the end.”

In the script, their priority was staying faithful to the original writer’s intentions and the tone of the story rather than particulars, like location, he says.

And it was through the landscapes that the filmmakers were able to capture another duality of light and dark, Ashcroft says, by finding “where is the beauty in the harsh ugliness of life.”

“One of the great things about the short story and a lot of Owen’s writing is that the landscape he captures is a real character, it’s a real imposing force, that’s why I was really drawn to that story.

“The whenua I find is very, on the one hand, it’s that beautiful clean green ‘Lord of the Rings’ picture-postcard view, and the other aspect I find is that it can be completely indifferent.

“Good things and bad things happen on that landscape, blood is spilled continually through history
and I feel that the land retains a sense of that mood and what happens on it.”

He says Marshall was gracious since the start, when the film was proposed, and in his response to the final production.

“His opinion was the one I was most nervous about seeing the film, and I had a few other people ask him for me as well, just in case he was feeling very polite about giving me an answer.

“He was very complimentary, and Eli Kent and I also optioned another of his works, The Rule of Jenny Pen, so he hasn’t pulled that option of the table so I can only take that as a good sign.”

Coming Home In The Dark premiered at the 2021 Sundance Film Festival and was received to critical acclaim, leading to Ashcroft being approached to direct the screen adaptation of Bigfoot horror novel Devolution by American author Max Brooks.

The story follows what happens to a hi-tech eco community of wealthy people when they are cut off from civilisation after a volcanic eruption.

“I’ve never had an interest in Bigfoot,” Ashcroft says.

“But it’s Max’s treatment of looking at what happens to people when they’re put under extreme pressure and duress and how that shapes and changes people and reveals people.

“I’m still kind of pinching myself as to why they chose me, but it was a very easy pitch. It was a book that I knew about so I could speak to.”

Ashcroft says he’s got another crime thriller adaptation in the works, but couldn’t yet say what it was because the news had not yet been released.

Coming Home In The Dark opens in New Zealand cinemas on August 12.