Over time, her role in building up a business founded on serving up targeted ads to voters to influence the outcomes of elections worldwide has come under scrutiny.

Kaiser presents her version of events in a new book: Targeted.

Meanwhile in an ironic twist she's now become a privacy advocate, calling on the big tech companies to do a better job of protecting and preserving the wealth of information they hold about us. 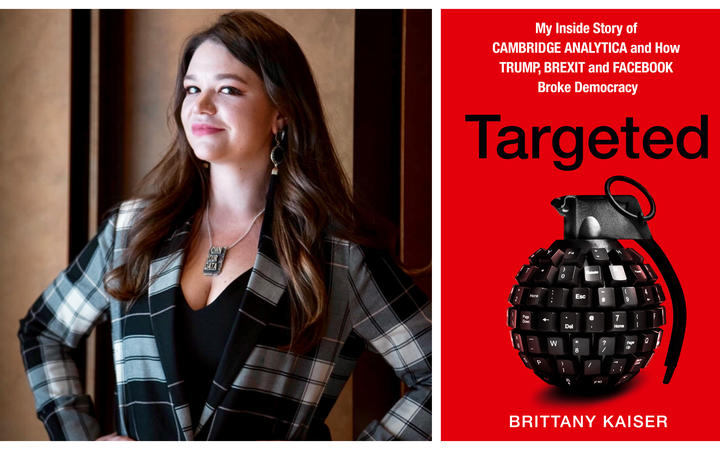 She told Kim Hill she joined Cambridge Analytica because she wanted to learn more about big data and founder Robert Mercer was a legendary data scientist.

However, she says she was shocked when she discovered how the company was mining data from Facebook.

“I was quite shocked to find out this was either taken in a coercive manner or perhaps even in an illegal manner.”

Data was obtained through online quizzes and questionnaires but it also gave the company access to respondents’ entire networks.

“There’s no legal structure anywhere in the world where I’m allowed to consent on behalf of another able-minded adult, and that is a huge problem that Facebook really hasn’t been able to solve.

“Although Facebook has closed that loophole, that data is out there, that data that possibly of hundreds of millions of people has been bought and sold and traded around the world for the past many years, and there’s no way we can actually get it back.”

The more she discovered about the company and Mercer, the more she began to question her own motivations, she says.

“The more I learned about him the more I was not just sceptical of my decision under his investment but also very curious as to what his means to the ends were going to look like.”

She acknowledges it took her a long time to figure out what the company was up to.

“Yeah I couldn’t regret that more.”

Colleagues on who had run the Trump campaign showed her their working methods.

“And they showed me some of the most horrific things I’d ever seen.”

They had created target groups of Democrat supporters with the aim of discouraging them from participating in the election.

Since leaving Cambridge Analytica she says she wants to atone for what she became involved in.

“I consider myself a very smart person, but as I was writing my book, especially going back and tracing every single step, I wonder was I motivated to financially support myself and my family or was I motivated by power? I don’t know but something seduced me.”

She is now a privacy activist and has co-founded the Digital Asset Trade Association (DATA) and says she wants political ads to be banned on social media.

“It’s not that I want them banned forever, right now I know that Facebook nor Twitter nor Google have the manpower or technology ready in order to police disinformation discrimination sexism – they’re not good enough at it yet.

“If they are going to allow politicians to say whatever they want I think citizens are at risk especially in election years.”