Saturday Morning for Saturday 12 May 2018

This Saturday Morning: Kim talks to author and social critic Barbara Ehrenreich about her new book Natural Causes, which rejects the idea of striving for an ultra-long life; Arjan van der Boon on how a set of clogs set him on a quest to re-investigate his Dutch-ness - with his efforts now honoured by the Dutch government; Māori-Samoan chef Monique Fiso on her quest to create an empire based on traditional methods and ingredients; Håvard Bustnes on his new documentary, which sees him trail the women of Greek's neo-Nazi party; Emma Jameson outlines a new Auckland exhibition looking at local watercolours from the 19th century; sculptor Fred Graham receives another major gong; Simon Morris on the fury of Coronation Street fans this week, with TVNZ saying it would skip the series ahead 18 months in prime-time; and classics reviewer Kate Camp takes on One Flew Over the Cuckoo's Nest. 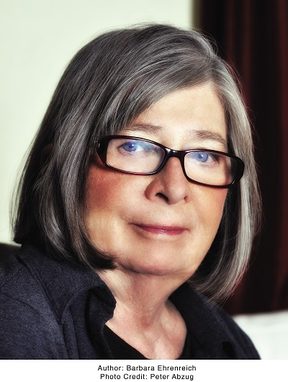 Barbara Ehrenreich is the author of over 20 books, including the bestselling Nickel and Dimed: On (Not) Getting by in America, which saw her go undercover as a low wage worker to examine the impact of the 1996 Welfare Reform Act in the US, and Smile or Die: How Positive Thinking Fooled America and the World. Ehrenreich's latest book is Natural Causes: An Epidemic of Wellness, the Certainty of Dying, and Killing Ourselves to Live Longer.  She writes regularly for Time, Harper's, the New York Times Magazine and various British newspapers including The Times and the Guardian. She lives in Virginia, USA.


9:04  Arjan van der Boon - Knight of the Order of Orange-Nassau 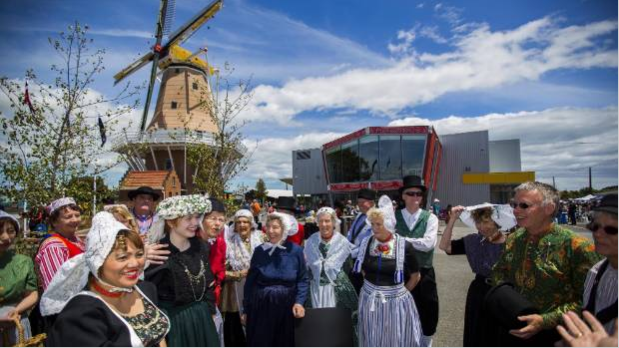 Arjan's Knight of the Order of Orange-Nassau Photo: Supplied

Arjan van der Boon suspected something was up ahead of the opening of the Abel Tasman exhibition at Foxton's Dutch Museum - so he got himself ready in a jacket and tie. It was still a huge surprise to receive a knighthood by the Netherlands from the Dutch ambassador, presented beneath the full scale replica of the 17th-century Dutch windmill that stands next to the museum. Receiving the honour was the culmination of 12 years of working to establish Te Awahou Nieuwe Stroom, a multicultural centre  in the Horowhenua town that houses the museum. Van der Boon is a marketing lecturer at Manukau Institute of Technology. 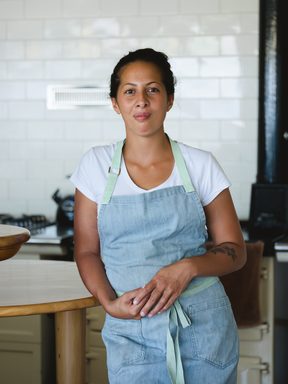 From an after-school job as a sandwich hand at the age of 14, Māori-Samoan Wellingtonian Monique Fiso has always wanted to be a chef. After her first fine dining job working for chef Martin Bosley at the Port Nicholson Yacht Club, she moved overseas, working as a sous chef in some of New York's top kitchens. She returned to New Zealand in 2016 and began the pop up dining series, Hiakai, which aims to use traditional Māori cooking techniques and ingredients combined with Michelin-star methods.  Fiso - who is about to open a restaurant in Wellington based on Māori cuisine - will appear in two events on June 2 at Escape! The Tauranga Arts Festival. 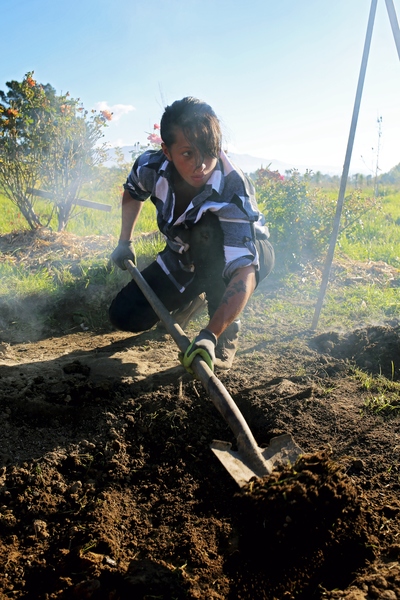 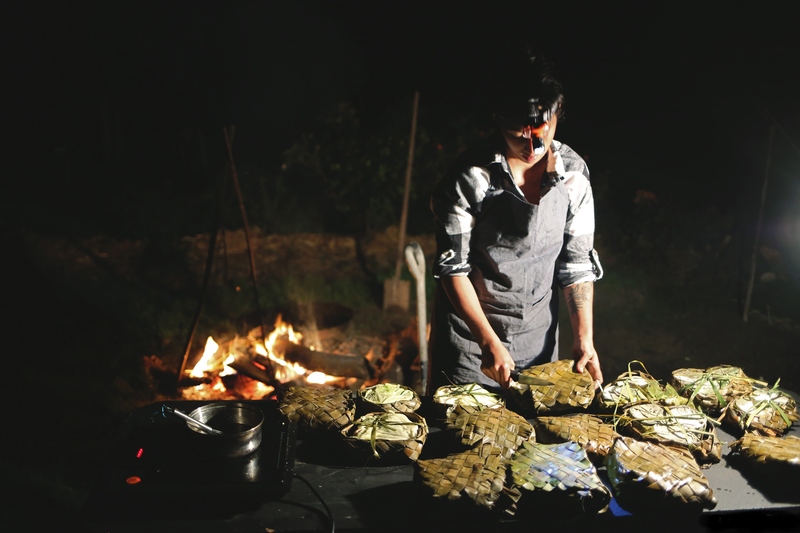 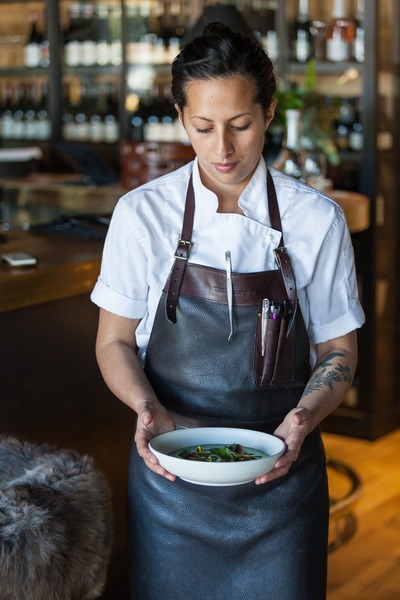 The chef and her Hiakai boil-up 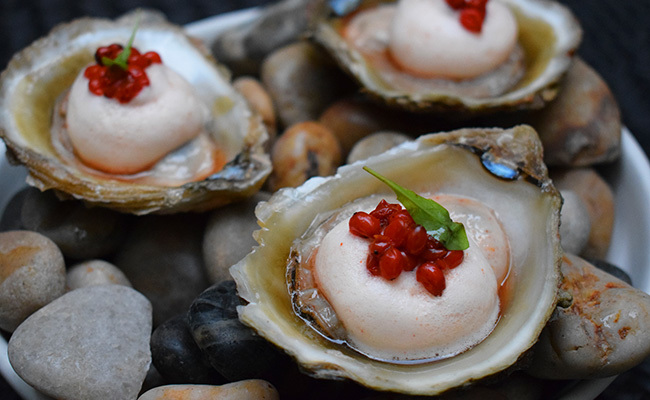 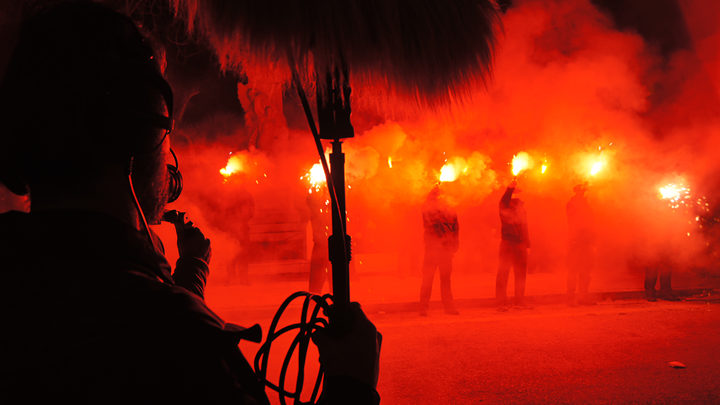 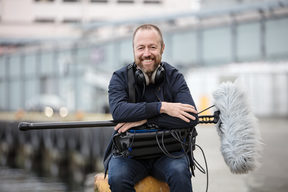 Director Håvard Bustnes is a award-winning director and producer. He holds a degree in directing for television from the College of Film and TV at Lillehammer, Norway. His films have been selected to more than 70 festivals all over the world, and two have had theatrical release in Norway, Denmark, Taiwan and South Korea. His new film Golden Dawn Girls, about the women of Greece's neo-Nazi party, premiers at the 13th International Documentary Film Festival in Wellington tonight (May 12). 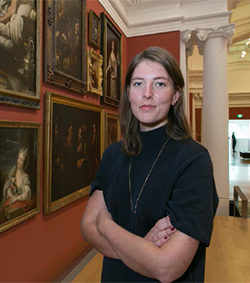 Emma Jameson is an assistant curator of historic international and New Zealand Art at the Auckland Art Gallery Toi o Tāmaki. She has curated the exhibition First Impressions: 19th-century watercolours of the Auckland Region, which features watercolours by amateur and professional artists from the era 1840-1890. The exhibition explores how early European artists aimed to capture the light and vast horizons of Aotearoa, and portray their vision of an idyllic landscape.  Jameson has interned at the Peggy Guggenheim Collezione in Venice and has twice worked as a summer research scholar at the University of Auckland, assisting Professor Dr Erin Griffey in researching the inventories of Charles I and Charles II.  In 2015 she completed the three-month Marylyn Mayo research internship at the Auckland Art Gallery Toi o Tāmaki, during which time she researched and ascribed dates to over 700 works in the gallery's collection.

Work from 19th-century watercolours of the Auckland Region

Caroline Abraham From the Pier at Auckland March 1852 watercolour 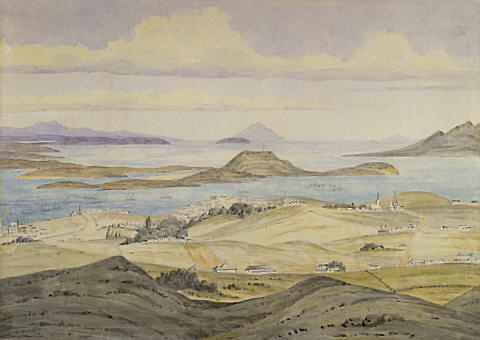 Edward Harker No 1 View of Parnell and Auckland taken from the top of Mt Eden c.1865 watercolour 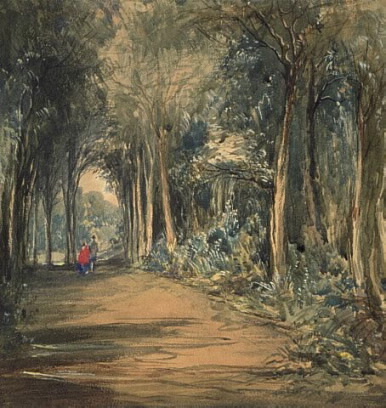 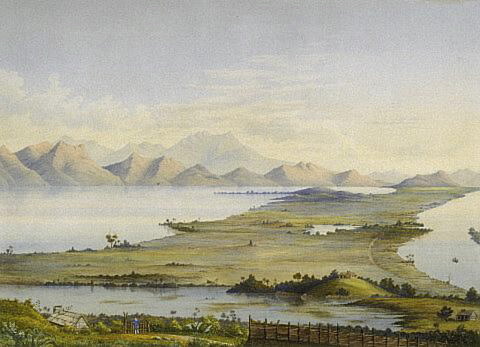 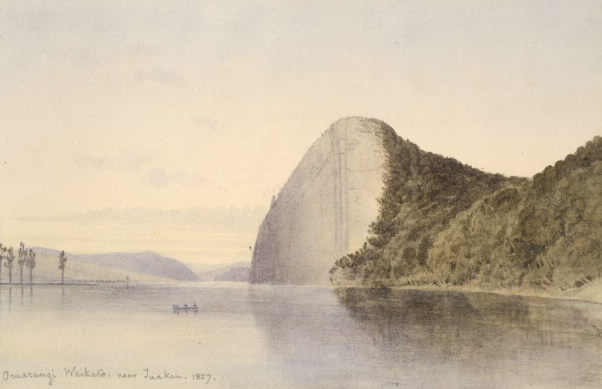 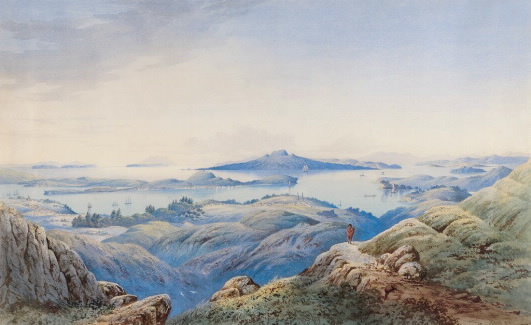 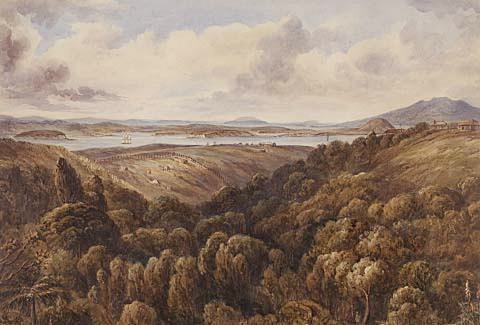 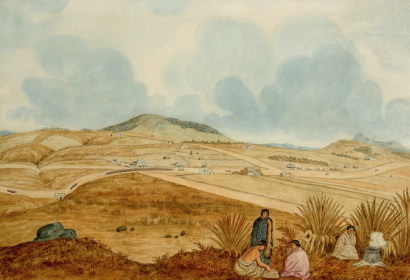 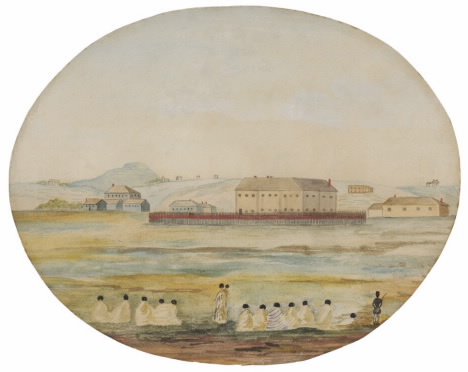 Will Peebles A Rough View of the Barracks Square 1849 watercolour 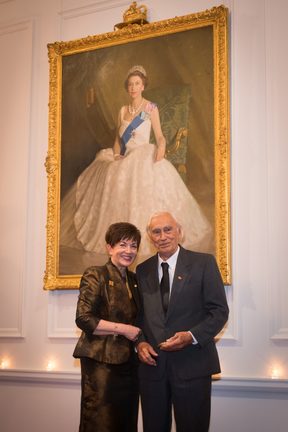 Sculptor Fred Graham (Ngāti Koroki Kahukura, Tainui), aged 89, has gained another prestigious prize, being named this week as a recipient of  an Arts Foundation Icon Award. Many of his works can be found around Auckland - on the wall outside Auckland Art Gallery, in the courtyard of the High Court, in the Auckland Domain, the botanic gardens, Mission Bay, and where Shortland St meets Queen St. His sculptures are held in major art galleries in Aotearoa and in international collections. Graham, a former Maori All Black, belonged to a group of artists including Ralph Hotere and Cliff Whiting who, from the late 1950s, developed a new form of modern Maori art. Graham was named an Officer of the New Zealand Order of Merit in the New Years Honours List 2018 for his services to Maori art, and won Te Tohu mō Te Arikinui Dame Te Atairangikaahu Exemplary/Supreme Award in last year's Te Waka Toi Awards. He is still working in his studio in Waipu where he lives with his wife of 60 years, Norma.

The work of Fred Graham 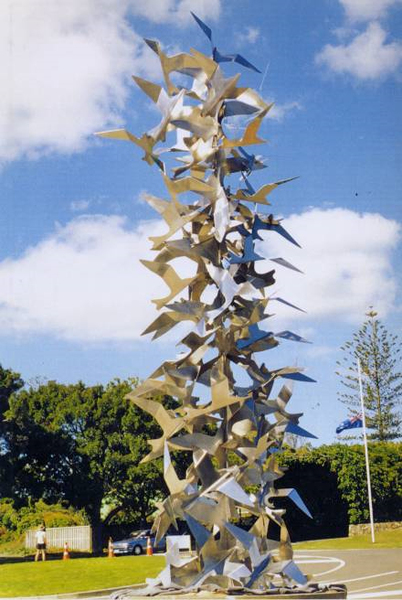 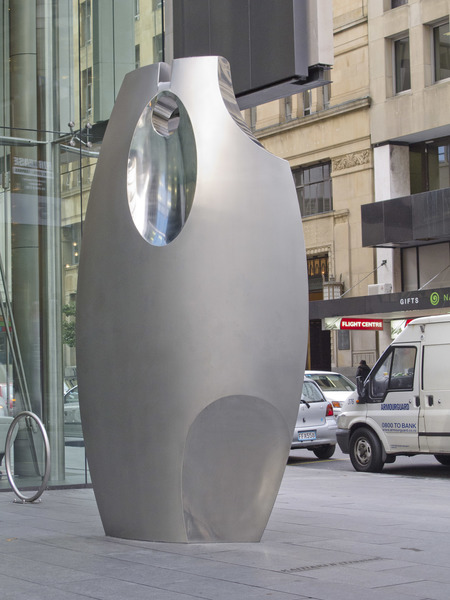 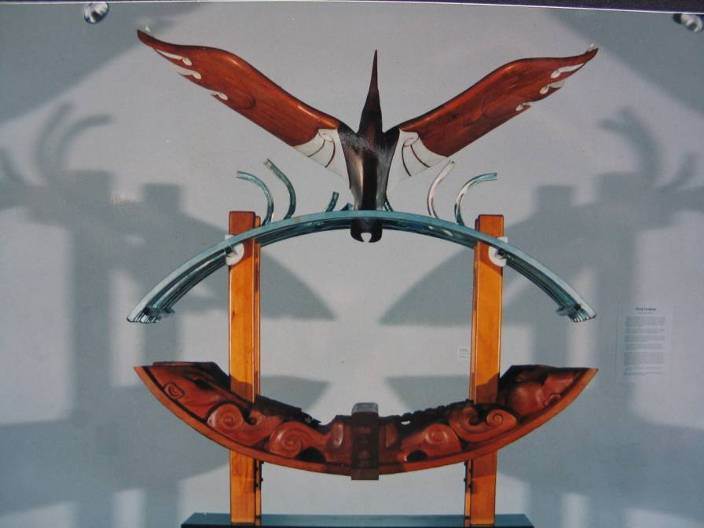 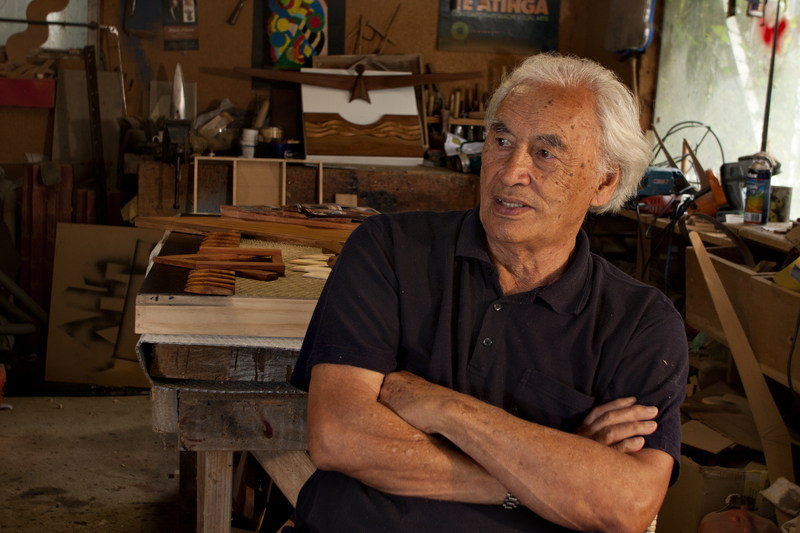 Fred Graham in his workshop 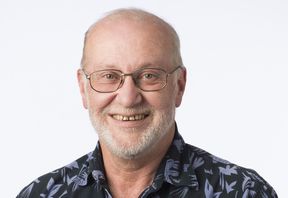 Coronation Street fans were shocked at this week's news that next month the soap watched by generations of Kiwis is taking a great leap forward - a leap of 18 months in fact, so viewers in Aotearoa will see episodes screened here only a week after they go to air in the UK. Catch-up episodes on TVNZ will screen at 1pm Monday to Friday for viewers who want to follow the existing 2016 storylines. A fervent fan of Coro, Simon Morris (RNZ film reviewer and presenter of At the Movies, and Standing Room Only producer) isn't best pleased. 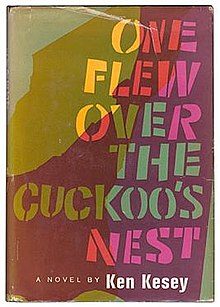 One Flew Over the Cuckoo's Nest - original cover Photo: Wikicommons

Kate Camp is the author of six collections of poetry published by Victoria University Press, the most recent of which is The internet of things (2017). She's won the New Zealand Book Award for The Mirror of Simple Annihilated Souls, and the Best First Book Award for Unfamiliar Legends of the Stars. Camp held the Creative New Zealand Berlin writers residency in 2011, and the Katherine Mansfield Menton fellowship in 2017. She has reviewed classic literature on Saturday Morning since 2001; today, she refreshes the collective memory of the book One Flew Over the Cuckoo's Nest by Ken Kesey.

Natural Causes: An Epidemic of Wellness, the Certainty of Dying, and Killing Ourselves to Live Longer

Nickel and Dimed: On (Not) Getting by in America

One Flew Over the Cuckoo's Nest