Mary Beard is Professor of Classics at the University of Cambridge, a fellow of Newnham College, and Royal Academy of Arts professor of ancient literature. She is the best-selling author of a number of books about the ancient world, a television presenter, classics editor of the Times Literary Supplement, and writer of the blog, A Don’s Life, which appears in The Times, and extracted in book form as It’s a Don’s Life (2009, Profile, ISBN: 987-1846682513) and All In a Don’s Day (2012 (Profile, ISBN: 978-1846685361). She has also become renowned for her fight back against online abuse and trolling.

Peter Mullan is a Scottish actor (Top of the Lake, My Name is Joe) and director (The Magdalene Sisters, Neds). He is visiting New Zealand to take a master class and speak In Conversation at the third annual event for filmmakers, Big Screen Symposium 2014 (27-28 September).

Samoan brothers Pene and Amitai Pati and their cousin Moses Mackay record and perform as the trio Sol3 Mio. Their self-titled debut album, featuring an operatic take on a range of traditional and popular songs, was the biggest selling album in New Zealand in 2013. A book about their life story, Sol3 Mio: Our Story (Penguin), will be published in late October, and a DVD of their live show, Ladies & Gentlemen…, will be released in November. Sol3 Mio are currently on tour, performing in Wellington (28 and 29 September) and Sydney (22 October) in advance of a 11-date UK tour in November, supporting English singer Alfie Boe, then Christmas in the Vines (Auckland, 21 December) and a New Zealand tour in February/March 2015. 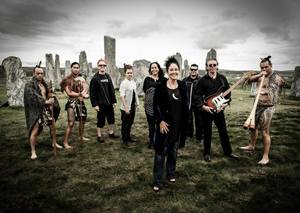 Singer and songwriter Moana Maniapoto has been performing and recording since 1987, and formed her band Moana in the Tribe with its soul-haka-funk fusion in 2002, touring internationally. Paddy Free is a member of electronic duo Pitch Black, and has been playing keyboards as a member of The Tribe since 2013. He produced and co-wrote the fifth Moana and the Tribe album, Rima, which has just been released. (Moana, Paddy and the Tribe also perform in session on Music 101 today.)

Tasmanian writer Richard Flanagan is the author of six novels; his latest is The Narrow Road to the Deep North (Vintage Australia, ISBN: 978-1-741666700), about prisoners of war on the Burma Railway during the Second World War. It has been hailed around the world as a masterpiece, won the 2014 Australian Indie Award, the 2014 Western Australia Premier's Book Award, and has been shortlisted for the 2014 Man Booker prize.

Painter, poet, curator and writer Gregory O'Brien is the author of a number of books, most recently the collection Beauties of the Octagonal Pool (AUP, 2012).He will discuss Puna Wai Korero: an Anthology of Maori Poetry in English, edited by Reina Whaitiri and Robert Sullivan (Auckland University Press, ISBN: 978-1869408176).

Leonard Cohen: Slow
From the 2014 album: Popular Problems
(Columbia)
Played at around 8:55

Aotearoa: Maranga Ake Ai
The 1985 single from the album: Tihei Mauriora
(Jayrem)
Played at around 10:35

ColdCut: This Island Earth
From the 2006 album: Sound Mirrors
(Ninja Tune)
Played at around 10:45

Bob Marley & The Wailers: War
From the 1976 album: Rastaman Vibration
(Island)
Played at around 10:50