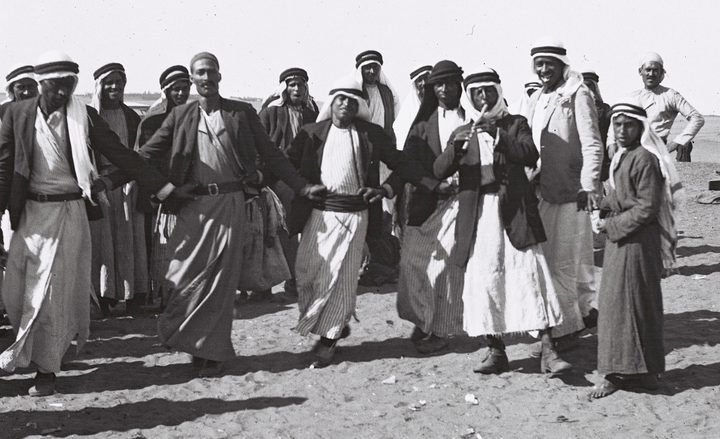 Farmers dancing the traditional dabke at a wedding reception of a Bedouin couple in the Negev, 1933. Photo: Wikimedia Commons

These days, cultural appropriation which can raise the emotional temperature and reveal fissures in the otherwise smooth story of the development of a nation’s culture.

When a particular group decides that its culture – its dance – has been taken and reconstituted in another context, bitter controversy can erupt. Think of the outrage here at the versions of the haka which have appeared overseas, often misused for commercial or other purposes.

According to Assoc. Prof Nicholas Rowe, there is a parallel example in recent Palestinian history, one which reflects fraught 20th-century context of the establishment of Israel, and the impact of Zionism.

At the centre of this argument about appropriation is the dabke, a celebratory wedding dance which has been popular among Palestinians for centuries. In the folk dance, all participants hold hands, stamp and then move joyously round in circles.

Rowe says that the dabke was remade into something else entirely over a century-long period which began in the 1920s and 1930s. At that time, Zionist pioneers from Europe were starting to settle in Palestine with the aim of establishing the new state of Israel as a homeland for the Jews. They were responding to the persecution the Jews were facing in so many locations round the world, but predominantly in Europe.

The leading choreographer and dance educator Rivka Sturman was outraged at what she found: Jewish youth in the new camps performing German folk dances: a cultural expression of the regime whose anti-Semitic policies were intensifying during the lead-up to the WWII and the Holocaust to come.

Her response? That the new people of Israel needed to find their own dances. So, according to Rowe, they looked to the present-day rural Palestinians. “And they said, ah, these are the dances we must have been doing two thousand years ago. And they started to study them.”

Just as an aside, Rowe thinks it’s fascinating thing how cultural anthropologists the world over seem to assume when they see an indigenous population, they think, for example that the Australian aboriginal dance they are observing must be 40,000 years old, because they assume that indigenous people can’t innovate.

He concludes that a parallel Biblical fantasy was going on with the Zionist pioneers who declared that the Palestinian dances they could observe then were actually typical of Jewish culture two thousand years before. Their conclusion? That was our dance. So they learnt styles like the dabke, started to perform them at festivals, and over time presented them as the national Israeli dances.

At the Daaliyah Festival each year through the 1940s, the one that looked most authentically like the rural Palestinian folk dances was the winning group.

The establishment of the state of Israel in 1948 saw the exile of 700,000 Palestinians from what had previously been their homeland. He remarks, “A lot of those people who had actually been teaching and sharing those dances suddenly found themselves driven out of their homes and in the surrounding states in refugee camps, unable to return. And they’re still facing that same situation today.”

As the Palestinian people disappeared from the state of Israel, so did the Palestinian influence on the dance forms the Israeli pioneers adopted. According to Rowe, if we look in the texts of the Zionists of the 1950s and the 60s they say, “Ah, the miracle of the Israeli folk dance. It came as if from nowhere. And now it’s performed all over the world.”

Although we might think that’s enough appropriation for one little dance, it wasn’t just the Israelis who did it.

In the 1960s when the Arab communities were seeking to consolidate identity and power, the idea of Pan-Arabism accumulated power and force. Given the popularity of dance as a form of cultural identity, performers from Lebanon came into Palestine and went into the West Bank. Not liking what they saw, they offered to show the proper pan-Arab, now Lebanese, dabke folk dance. And so it was cleaned up, put on stage, in a new sanitised form.

In the process, local traditions were derided. 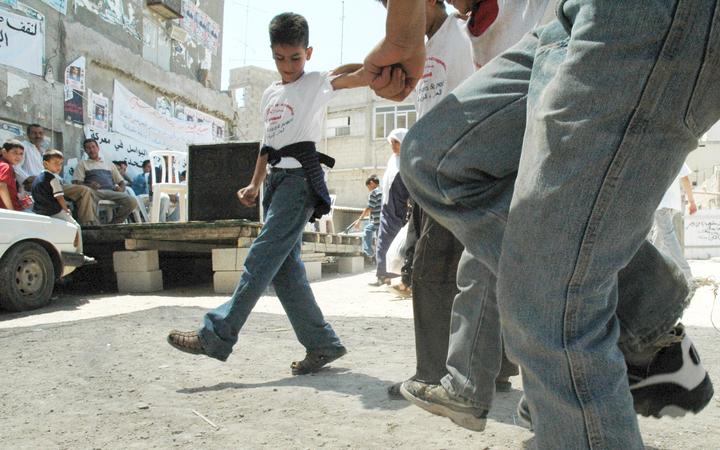 By the 1980s, however, Pan-Arabism was on the way out and the Palestinian nationalists were in the ascendancy.

So the cry from them was, “Forget that pan-Arabist one. It’s inauthentic. Let’s go back to the roots, the original roots. But part of this form is women don’t dance. It’s a men’s dance because it’s very masculine. We are a masculine culture so women stand on the side and hold water bottles and say ‘Ooh, that’s lovely.’”

Rowe considers that this reaction was just as unhistorical as that of the Zionist pioneers of a previous generation. Why? “It’s denying a whole history which had been clearly documented. We’ve got images and stories going back into the 19th century that show women dancing.” 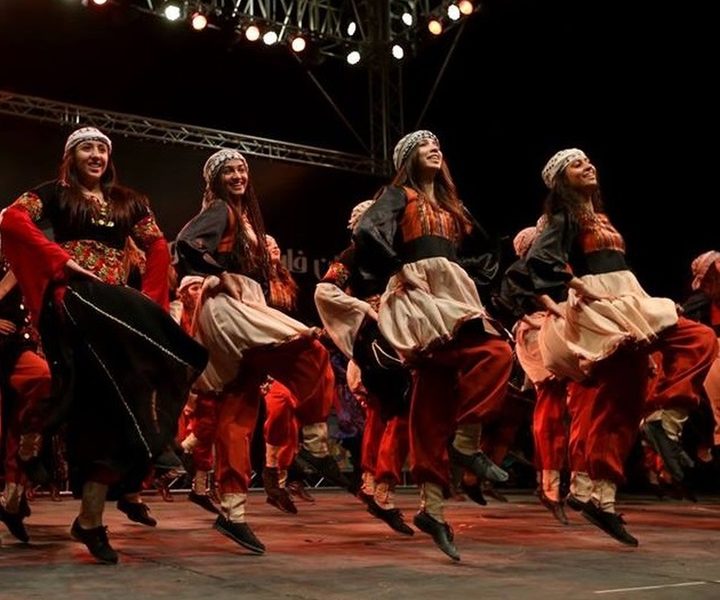 In the years to follow a lot of the Palestinian people were getting a bit fed up with all of this appropriation. They organised groups Like the El-Funoun Palestinian Popular Dance Troupe which said “we’re going to construct our cultural identity ourselves. We’re going to recognise it’s dynamic. It’s going to be rooted in our own dance forms, but we’re going to do it our way."

And they continue to this day, he says, to regenerate the form. 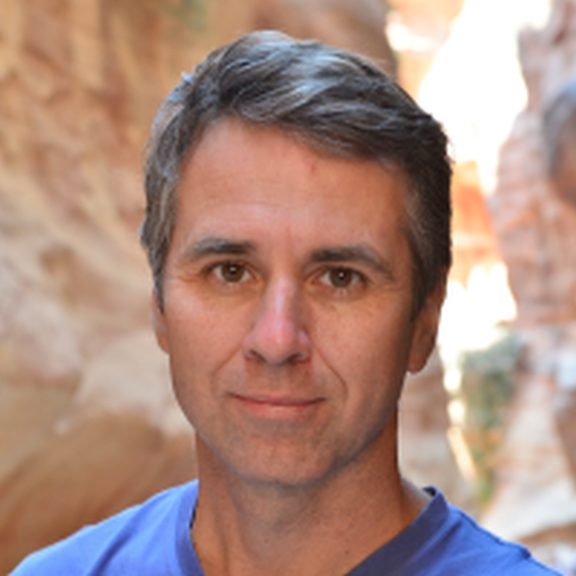 Associate Professor Nicholas Rowe is a graduate of the Australian Ballet School and holds a PhD from the London Contemporary Dance School, University of Kent at Canterbury. He has choreographed and performed with The Finnish National Ballet, Australian Ballet, Sydney Dance Company, Royal New Zealand Ballet, Nomad Dance Theatre, Modern Dance Turkey and Ramallah Dance Theatre. From 2000-2008 he resided in the Occupied Palestinian Territories working in refugee camps on dance projects with local artists. Nicholas’ film work includes the feature-length children’s film The Secret World, which has been screened at festivals around the world.

He has published extensively on education and dance in diverse cultural contexts, and his books include Talking Dance: Contemporary Histories from the South China Sea (2015) Talking Dance: Contemporary Histories from the Southern Mediterranean (2014), Moving Oceans: Celebrating Dance in the South Pacific (2013), Raising dust: a cultural history of dance in Palestine (2010), and the performing arts workshop manual Art, during siege (2004). He was awarded a University of Auckland Teaching Excellence Award in 2011 and a University of Auckland Research Excellence Award in 2012.