Back in 1911, a party from the Scott’s Antarctic expedition made the ‘Worst Journey in the World’ – a midwinter sledge haul to collect eggs from the first Emperor penguin colony ever discovered, at Cape Crozier on Ross Island.

Alison Ballance, on the other hand, reckons her early summer trip to meet the Emperors and the NIWA team studying them, is the ‘best journey in the world’, although she discovers that the penguins are keeping the researchers waiting. 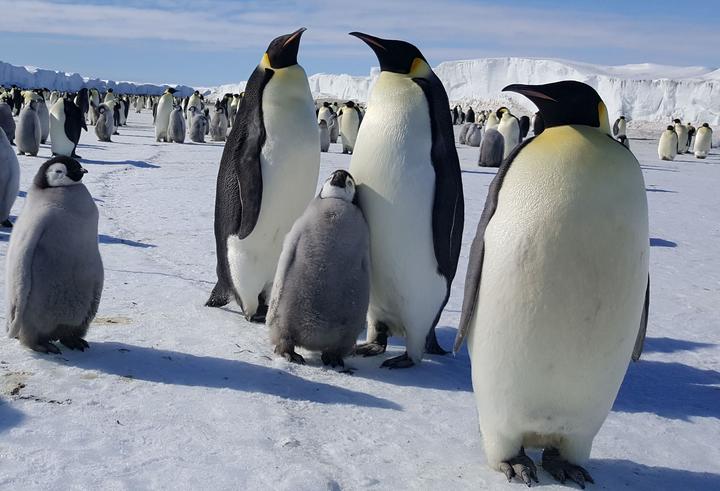 Apsley Cherry-Gerard wrote the book ‘The Worst Journey in the World’. It was about the trials and tribulations he faced back in 1911, along with Edward Wilson and Birdie Bowers.

The three men made the 120-kilometre trek to Cape Crozier in the midwinter dark. It was bitterly cold, their teeth cracked and their sleeping bags and clothes were almost permanently frozen solid.

They found the penguins incubating their eggs through the winter and collected some to take back for study.

Emperor penguins are the largest penguin species, and they breed on the annual sea ice in about 54 colonies around the edge of Antarctica. It is estimated there are about 238,000 breeding pairs.

Emperor penguins incubate their eggs on their feet and don’t have a nest. They breed in a large huddle of birds which slowly moves as the birds take turns staying warm in the centre of the group.

Emperor penguins find their mate and chick in the colony by the sound of their call; each bird has a unique call. 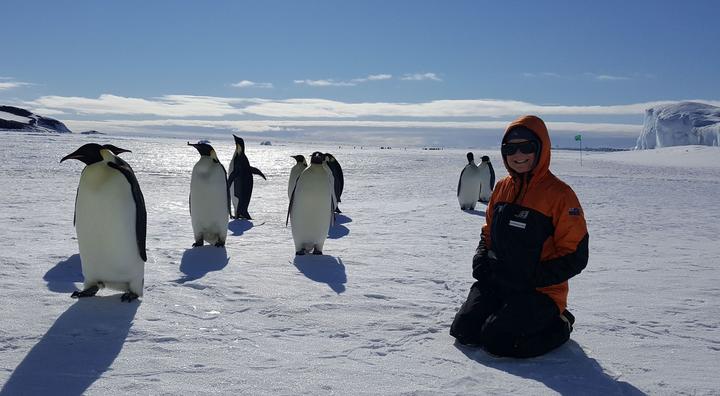 The Cape Crozier emperor penguin colony is being studied by a NIWA team as part of the Ross Sea research and monitoring programme, known as Ross RAMP. The programme is monitoring the effectiveness of the very large Ross Sea marine protected area.

There were four Ross RAMP projects taking place in the Ross Sea during the 2019-20 summer: Emperor penguins, past and ancient Adelie penguin colonies and Weddell seals.

The Emperor penguin team was led by Gitte McDonald from the Moss Landing Marine Laboratory. The researchers attached video cameras and biologging data tags to 19 breeding birds to study their foraging at sea: where they were going, how often they dived and what they were eating.

Water, water everywhere but not a drop to drink 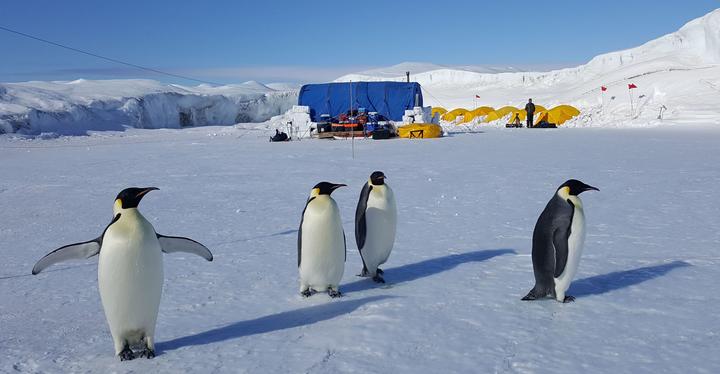 Non-breeding Emperor penguins visit the field camp where penguin researchers are living on the sea ice, sheltered by cliffs that are the seaward-edge of the Ross Ice Shelf. Photo: RNZ / Alison Ballance

In the field in Antarctica, researchers melt snow or ice to make water. The blocks of snow stacked around the blue tent in the photo above are the water supply for the Cape Crozier field camp.

At Scott Base, a reverse osmosis plant converts seawater to fresh drinking water. The water is stored in heated tanks and moved around along heated pipes to prevent it freezing.

Under the Antarctic Treaty, all waste must be removed from Antarctica, and that includes human waste. The waste water treatment plant at Scott Base uses microbes and then ozone to clean waste water before it is pumped out to sea. Sewage sludge is safely stored and then shipped back to New Zealand where it is incinerated.

The sewage treatment microbes include tardigrades, which are also known as water bears or moss piglets. They are an ancient group of animals that are almost indestructible, capable of surviving extreme temperatures, pressures and desiccation.