Our Changing World for Thursday 10 October 2013

Grant Searchfield is a senior lecturer in aural rehabilitation at the University of Auckland, focusing his work predominantly on hearing technology and accessibility of such technology for those who may not otherwise be able to afford it. Patria Hume, the director of the Sport Performance Research Institute at the Auckland University of Technology, is an expert in sports injury prevention and sports performance biomechanics. Together they are carrying out a review of protective equipment, in particular devices for people with hearing or visual impairments, as well as those who use prostheses.

One area of their research is dedicated to finding out what the concerns are of sports players who wear hearing aids, with a particular focus on rugby players. Grant hopes the research will eventually lead to the establishment of guidelines which will make it easier for players and their clinicians who are choosing hearing aids for them.

A 1000-Year Climate Record from Kauri 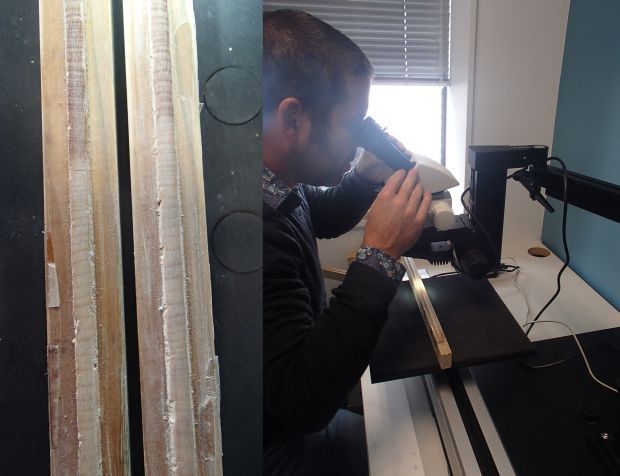 Andrew Lorrey is a paleoclimate scientist with NIWA, and he’s leading an international team working on a Marsden-funded project that’s using kauri chemistry and tree rings to build a record of New Zealand’s climate during the last thousand years.

Alison Ballance meets Andrew to find out how long-lived kauri trees may be able to provide detailed data from the time before we began using instruments to record weather and climate. The information is stored in the kauri’s annual tree rings, which can be accurately dated. As well, chemical signatures from the rings may reveal information about temperature, storms, rainfall and drought. While the past thousand years of climate have been well documented for the Northern Hemisphere, this will give a rare Southern Hemisphere perspective on features such as the Medieval Climate Anomaly and the Little Ice Age.

Science of the Atmosphere

Bodeker Scientific is a research company with a focus on the science of the atmosphere, from ozone depletion to climate change. It uses data sets compiled by some of the world's largest research organisations, including the National Oceanic and Atmospheric Administration and the European Space Agency, to provide long-term records and more nuanced information from the wealth of data. Company director Greg Bodeker and his team discuss some of their current work, such as a project to merge ozone measurements from different satellites and a project to better describe changes in precipitation over New Zealand, which is a contribution to the Climate Changes, Impacts & Implications for New Zealand project.

The Health of New Zealand Adults 2011/12 survey conducted by the Ministry of Health found that the daily smoking rate has continued to fall, with fewer than one in five adults now smoking. In particular, the rate of daily smoking has fallen for youth (15–17 years) from 14 per cent in 2006/07 to 6 per cent in 2011/12. However, the report also says that Māori in particular continue to have high smoking rates, with two in five Māori (41 per cent) smoking.

Multiple trials have shown that nicotine replacement therapy (NRT) doubles a smoker's chances of being abstinent one year later, with a quit rate of 10 per cent. In contrast, quit rates one year after a cold-turkey approach are 4 per cent. Yet, few smokers use NRT to help in their attempt to stop smoking.

University of Otago researcher Brent Caldwell is testing a therapy that offers smokers nicotine patches as well as a nicotine inhaler that delivers nicotine directly to the lung and therefore gets it to the brain within six heartbeats (just like smoking does). The Inhale study, led by Julian Crane, uses an inhaler based on the same design as puffer devices used to deliver medication to asthmatics. It delivers a short burst of nicotine and replaces the nicotine ‘hit’ of smoking. The team has recruited 700 trial participants to test their hypothesis that more smokers will be able to quit long term.