Our Changing World for Thursday 3 October 2013

The harvesting of grapes is one of the most crucial steps in the winemaking process.  Many factors come into play including ripeness, weather and of course the method used to gather in the fruit.  However, the traditional view that hand picking of grapes is needed to produce the best wine is being challenged by wine researchers at the University of Auckland.

Research from Paul Kilmartin provides the first published comparison of wines produced by machine and hand harvesting, and shows that machine harvesting results in higher levels of the passion fruit and grassy aromas that are so desirable in New Zealand sauvignon blanc.

And other work led by Paul, has shown that adding sulphur dioxide as soon as the grapes are harvested, also results in higher levels of the characteristic aromas.

The results are already benefitting the New Zealand industry, with winemakers re-examining their harvest approaches - shifting from hand to machine harvesting for their premium sauvignon blanc, to maximise the tropical fruit aromas in their wines.

Diabetes is a group of metabolic diseases in which a person has high blood sugar, and it can result in complications such as damage to the heart, aorta, kidneys, retina and nerves. Diabetic-induced heart failure has traditionally been thought to be the result of a defect in calcium homeostasis, but research by Garth Cooper’s diabetes research group at the University of Auckland has suggested that the main culprit is a defect in the mechanism for maintaining copper homeostasis. Their research (PDF - see pages 25-6) with rat hearts and kidneys, and with human hearts, shows that the copper imbalance is caused by defects in the mitochondria of cells and defects in the organ’s antioxidant defences.

The group has also shown in phase I and II clinical trials that treatment with a copper-selective chelator not only halts organ damage, but actually reverses existing damage.

Alison Ballance meets Garth Cooper and post-doctoral researcher Linda Zhang to hear about the research, which has been funded in part by New Zealand Health Research Council grants and is being ‘fast-tracked’ under the USA Food and Drug Administration’s approval process. Garth Cooper is professor of Biochemistry and Clinical Biochemistry at the School of Biological Sciences and the Department of Medicine at the University of Auckland, where he also leads the Proteomics and Biomedicine Research Group. He is a Principal Investigator at the Maurice Wilkins Centre of Research Excellence for Molecular Biodiscovery and is also Professor of Discovery and Experimental Medicine at the University of Manchester. 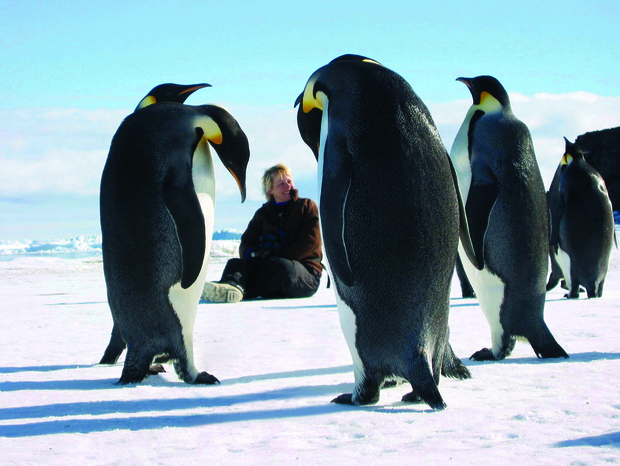 Palaeoclimate scientist and new director of the British Antarctic Survey Jane Francis, in her element in Antarctica.

Although Antarctica is now covered in ice, some of the most common fossils in the rock record are those of plants. These ancient botanical remnants are signposts to a much warmer past that supported lush tropical forests, flourishing in a humid climate.

Jane Francis is a palaeoclimatologist, most recently at the University of Leeds, who this week begins her new role as the director of the British Antarctic Survey. She was in New Zealand recently to present the 2013 S. L. Lecture in Antarctic Studies in which she discussed her research on Antarctica plant fossils, and how they trace ancient climates and the continent's journey to the South Pole.

The oldest Antarctic plant fossils reach back almost 400 million years, but perhaps the most astonishing discoveries are those of fossil plants from the mid-Cretaceous, about 100 million years ago when dinosaurs roamed the planet and Antarctica was already in a polar position but still much warmer than today. Sub-tropical forests and shrubs thrived, despite the extreme polar light regime of continuous summer sunlight and long dark winters.

Many of the fossil plants found in Antarctica are ancestors of vegetation that grows in South America and Australasia today. As the polar climate cooled and ice sheets developed about 35 million years ago, small dwarf shrubs of southern beech (Nothofagus) survived close to the pole for millions of years, until the expanding ice sheets wiped all forests from Antarctica.

Apart from her scientific research, Jane Francis has also collaborated with several artists who have painted reconstructions of Antarctic landscapes based on the information gleaned from the plant fossil record.For example, the image below, on the left, shows a reconstruction of the Alexander Island forests as they may have looked like during the mid-Cretaceous, about 100 million years ago. Painter Robert Nicholls has placed every tree and shrub in the position where the respective fossils have been found.

On the left, the reconstruction of the Alexander Island forests is based on the research of Jane Francis and her colleagues at the University of Leeds and the British Antarctic Survey, where the painting is displayed. On the right, a rock shows the impressions of glossopteris, an ancient seed fern which has also been found in South America, Africa and India. It was first discovered by Edward Wilson, doctor, artists and scientist on Captain Scott's ill-fated Terra Nova expedition, who was the first to study coal shales and to recognise them as geological relics from a warmer period.

New Zealand has a very long coastline, and there’s an awful lot of ocean out there that we’re responsible for, but about which we know very little. Traditionally, scientists have got in boats and motored around collecting basic information such as water temperature and salinity, which is very time-consuming, can’t be done in bad weather and just gives a single piece of data at one point in time.

But, working with the Monterey Bay Aquarium Research Institute (MBARI) which has more than 20 years experience in developing and deploying oceanographic monitoring buoys off the coast of Central California, the Cawthron Institute has developed a hi-tech coastal buoy that can sit out in the sea, and send back basic information such as currents and wind speed, regardless of how awful the weather. The work began in the early 2000s, and the latest model of remote buoy can now be deployed for a year at a time. It is powered by a solar panel and batteries, and collects information on water temperature, salinity, chlorophyll levels and currents, as well as wind speed and surface weather. This information is beamed hourly to the Cawthron Institute and made freely available on their website.

Alison Ballance heads to the Cawthron Institute to meet Paul Barter (left) and Chris Cornelisen (right) who tell her the TASCAM buoy in Tasman Bay is proving a boon to yachties and mussel farmers as well as scientists. They also check in on the Hawkeye buoy which has been installed in Hawke’s Bay. Their hope is to get a network of these buoys in place around the country, and have the data available as open access.