Our Changing World for Thursday 17 October 2013 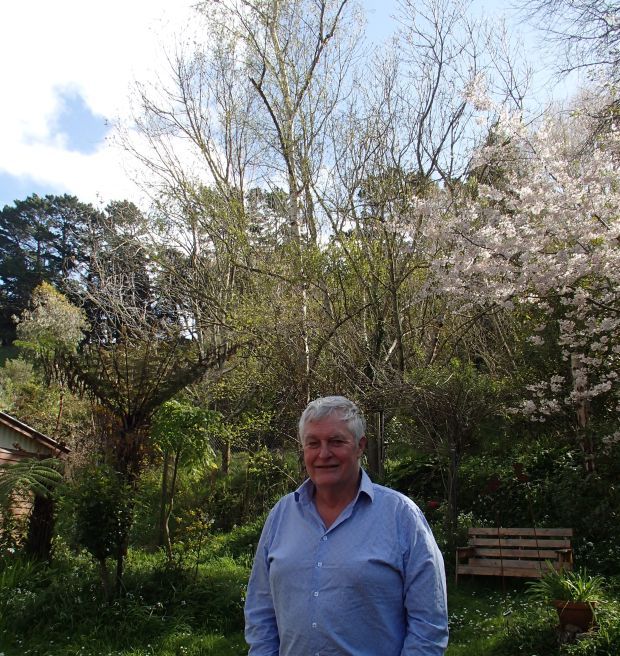 The apparently bare trees on the slope behind David Fountain are ash and birch trees that are actually producing lots of allergenic pollen in mid-spring. The more showy flowering trees are not producing this kind of pollen (image: A. Ballance)

David Fountain is a botanist who specialises in the study of pollen. He is responsible for preparing the regional pollen forecasts that are posted on the Metservice website each day from early spring to late summer. The forecast indicates what kinds of pollen are being produced in each region, and what the level of pollen is on that day (low, moderate, high). They are a guide to allergy sufferers to help them manage hayfever symptoms. Alison Ballance joins David in his Manawatu garden to find out what’s flowering in mid spring, and to hear how he goes about preparing the forecast, a process which considers many weather variables as well as pollen levels.

David has produced a detailed pollen calendar that is available on the Allergy NZ website. 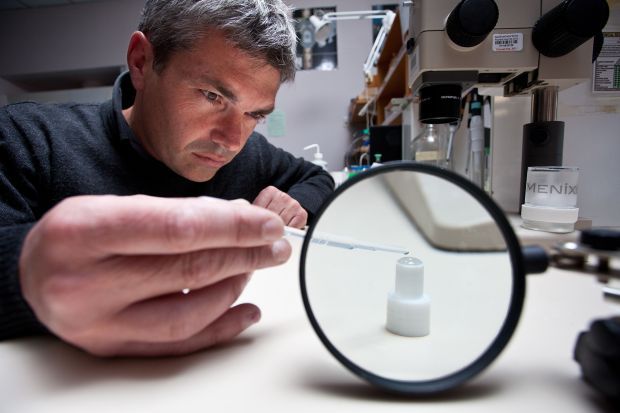 Stephen Sowerby with his invention for analysing parasite eggs (image: University of Otago)

Parasites in animals and humans are increasingly becoming drug-resistant, and scientists around the world are looking for solutions.

Stephen Sowerby from the University of Otago has invented a new device for detecting small particles, like parasite eggs or pollen, in fluids. Instead of using conventional McMaster slides for counting parasite eggs, the diagnostic tool utilises capillary rise and the properties of the meniscus to attract parasite eggs to a single place where they can be easily analysed and photographed. The idea being that with faster, cheaper and more accurate identification of parasites, the drugs used to fight these pest organisms can be better targeted.

The device was developed with Greg Mirams, of Dunedin’s Techion Group, and together with Otago Innovation Limited, a new company called Menixis has been set up to commercialise the product.

Earlier this year a group of leading academics, environmentalists, business people and lawyers launched the Wise Response Appeal. Alison Ballance catches up with three of the movement’s founders to find out what they think the risks are, and how they are calling on the Government to allow the Parliamentary Commissioner for the Environment to undertake a wide-ranging risk assessment that takes into account, ecological security, economic security, energy and climate security, business continuity and genuine well-being. Alison speaks with Sir Alan Mark from the University of Otago; Jonathan Boston, professor of Public Policy in the School of Government at Victoria University; and Ralph Chapman, director of the Graduate Programme in Environmental Sciences at Victoria University.

You can hear more from Alan Mark this weekend on Sunday Morning with Chris Laidlaw. He was also interviewed on Afternoons with Jim Mora earlier this year. 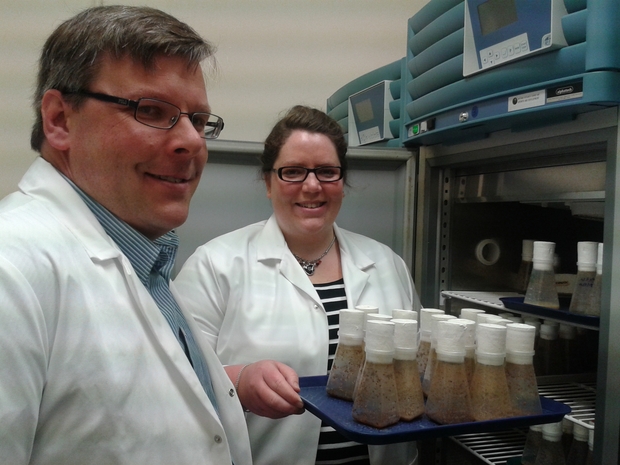 Peter Dearden and Sarah Morgan, with some of their diet-controlled fruit flies (image: V Meduna)

Scientists have long known that a restricted diet, without malnutrition, can extend the life span of some animals, from single-celled yeast to mammals. However, a team of geneticists at the University of Otago has shown that it is not the total calorie intake, but rather the content of macro-nutrients such as proteins and carbohydrates that matters.

Peter Dearden and Sarah Morgan have used fruit flies (Drosophila melanogaster) to test a hypothesis that a diet high in carbohydrates can lead to a longer life, while a high-protein diet shortens the lifespan. They found that the flies trade off longevity against fertility: while they live longer on a high-carb diet, they lay considerably fewer eggs than shorter-lived flies on a high-protein diet.

Drosophila is a model organism for geneticists. Its genome has been sequenced and the function of its genes is well known. In this study, the flies that have been reared on a high-carb diet show a higher expression of genes associated with immunity and stress responses, and the team hypothesises that these functions could play a key role in longevity.