Our Changing World for Thursday 12 September 2013

An adult grey-faced petrel returning to its burrow at night on Goat Island, seen at right from the Leigh Marine Laboratory (all images: A. Ballance) 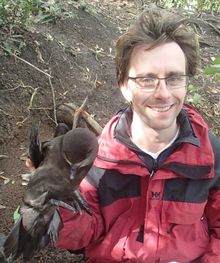 The University of Auckland’s James Russell (left) holds a joint position in the School of Biological Sciences and the Department of Statistics, and is an Associate Investigator in the Allan Wilson Centre for Molecular Ecology and Evolution. He won the 2012 Prime Minister’s MacDiarmid Prize for Emerging Scientist for his work combining ecology, genetics and statistical modelling to solve conservation problems, particularly around rodents and islands. He’s also very interested in taking what we’ve learnt about achieving successful island eradications and applying them to the much bigger challenge of a Predator-free New Zealand.

Alison Ballance joins James and masters student Jemma Welch (photographed below setting a rat trap) for a trip to Goat Island, Te Hāwere-a-Maki, in the Leigh Marine Reserve north of Auckland, where they’re combining research into rats and a small population of winter-breeding grey-faced petrels. Goat Island is just 9 hectares, and lies only 50 metres from mainland – as a result ship rats can easily swim across to the island, and although it is possible to remove rats from the island it is soon reinvaded. Jemma and James are trapping rats on the island during the grey-faced petrel breeding season to minimise rat predation on the small chicks, which are left alone in the burrow while both parents forage at sea. 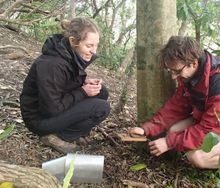 Grey-faced petrels are one of the indicator species that the Department of Conservation has chosen to focus on its recently developed Inventory and Monitoring Framework (PDF), being used to measure progress towards biodiversity targets. They have selected 106 taxa as a minimum set to adequately represent the full range of taxonomic groups, pressures and habitat types found in New Zealand.

Stephen Wing is a marine ecologist in the Department of Marine Science at the University of Otago, and he has been using stable isotopes to understand food webs and ecosystem linkages in various marine ecosystems, including Antarctica, the subantarctic and Fiordland. In the case of seabird islands (see story above) we have a terrestrial environment that is heavily influenced by a seabird which adds a strong marine nutrient signature to the land. Stephen tells Alison Ballance that in Fiordland the marine environment is strongly impacted by the surrounding land, both by a very large amount of freshwater in the head of the fiords which overlays and mixes with the saltwater, and by a large amount of leave fall. This terrestrial signature declines along the fiord out to sea.

Following the construction of the Manapouri power dam and a tail race which diverted water from Lake Manapouri into Doubtful Sound the amount of freshwater in the fiord increased significantly. One Royal Society of New Zealand Marsden Fund project by Stephen and post-doctoral researcher Lucy Jack has been investigating subsequent changes on species that are low down in the food web, such as cockles, and what impact this has on species higher up the food web, such as rock lobsters. They have also been looking at the benefits of Fiordland's marine reserves for maintaining populations of rock lobster and blue cod, and providing advice to the Fiordland Marine Guardians.

Stephen has another Marsden Fund project addressing the question of whether bioaccumulation of iron by seabirds enhances productivity around sub-Antarctic Islands.

With advances in science, forensic practitioners can now collect and quantify evidence from crime scenes in more ways than ever before. When this evidence is brought to court, judges, lawyers and juries have to decide what weight to give it. In this preview of an upcoming Royal Society of New Zealand lecture, University of Auckland’s James Curran explains to Ruth Beran how statistics are being used to aid the legal process.

He will present his lecture which is part of the Royal Society’s 10 x 10 series, at Palmerston North’s Central Library next Tuesday 17 September from 7.30pm.

Henry Hoot the Morepork, Sparkle the Kakapo, Peck the Pukeko, Cutey Wings the Little Blue Penguin and Waddle the Yellow-Eyed Penguin - they are just a few of the native New Zealand bird toys in the collection of Ben and Rowan Smith. They are nine and six years old respectively, and mad on birds. As members of the Kiwi Conservation Club, the boys often help out with tree-planting projects and go on frequent birding trips. They use their bird toys, which play real bird song, to help attract birds and they can identify birds with the accuracy of an ornithologist. To mark Conservation Week, which this year has Whanau – Family as its theme, Amelia Nurse joins the Hobden-Smith family for a wander through Zealandia.