Our Changing World for Thursday 1 August 2013

In this computer simulation, two black holes of equal mass spiral into each other and merge into a larger black hole. The gravitational waves emitted during this event are visualised by different colours. (visualisation: Ralf Kähler; simulation: Ryoji Takahashi, Ed Seidel; Max Planck Institute for Gravitational Physics/Zuse Institute Berlin/Center for Computation & Technology at Louisiana State University) 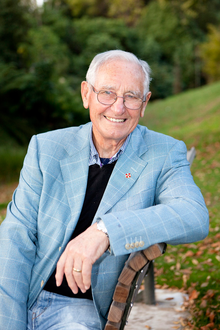 Fifty years ago, mathematician Roy Kerr (left, image University of Canterbury) revolutionised our understanding of black holes when he discovered a solution to Einstein's gravitational field equations. His work has been described as the most important single discovery within general relativity in the last 50 years, and observations are now beginning to prove him right.

The Kerr Solution provides an exact description of rotating black holes and clarifies that their size and shape can be characterised by just two numbers: mass and rate of rotation, or spin.

In May, Roy Kerr became the first New Zealander to be awarded the Einstein Medal for his achievements and in July, the Max Planck Institute for Gravitational Physics, also known as the Albert Einstein Institute, in Potsdam dedicated a conference to the celebration of the 50th anniversary of his mathematical feat.

Veronika Meduna meets Roy and his wife Margaret in Potsdam, towards the end of their two-month tour of honour, and Roy recalls his discovery and the response to its announcement in 1963. Reinhard Genzel, the director of the Max Planck Institute for Extraterrestrial Physics, discusses current research and evidence that supports the existence of a massive black hole at the centre of our galaxy, and Bernard Schutz, the director of the Max Planck Institute for Gravitational Physics, describes current and future projects that have been designed to detect gravitational waves.

You can also watch a video of an after-dinner presentation Roy Kerr gave on his discovery at the residence of HE Peter Rider, the Ambassador of New Zealand, in Berlin, and listen to an earlier Our Changing World interview.

For Universities, data is critical and Victoria University has designed a standalone platform that protects equipment like data centres, control rooms, and generators from up to 90 per cent of the forces generated by earthquakes.

Called QuakeSurfer, the system uses a ‘torsion bar’ suspension system (like that used in older cars) and seismic gliders to mitigate most of the effects of both horizontal and vertical shaking.

QuakeSurfer was officially opened by Minister of Civil Defence Nikki Kaye at the Karori campus of Victoria University on 13 June and passed the recent 6.5 earthquake with flying colours.

Ruth Beran meets IT Services Director Stuart Haselden who takes her on a tour, showing her the QuakeSurfer platform and the modular data centre which sits on top.

From left to right: QuakeSurfer being installed, the red moving parts, and the modular data centre sitting on top.

For Universities, data is critical and Victoria University has designed a standalone platform that protects equipment like data centres, control rooms, and generators from up to 90 per cent of the forces generated by earthquakes.

Called QuakeSurfer, the system uses a ‘torsion bar’ suspension system (like that used in older cars) and seismic gliders to mitigate most of the effects of both horizontal and vertical shaking.

QuakeSurfer was officially opened by Minister of Civil Defence Nikki Kaye at the Karori campus of Victoria University on 13 June and passed the recent 6.5 earthquake with flying colours.

The University worked with various partners to design and build QuakeSurfer including engineers Dunning Thornton, MJH Engineering and Robinson Seismic. Earthquake prone countries like Japan and the United States have shown an interest in the technology.

One of the unfortunate side-effects of fishing is the accidental by-catch and death of seabirds and marine mammals. A few weeks ago the Ministry for Primary Industries released a National Plan of Action for Seabirds 2013 which aims to ensure that ‘New Zealand seabirds thrive without pressure from fishing related mortalities, New Zealand fishers avoid or mitigate against seabird captures and New Zealand fisheries are globally recognised as seabird friendly.’

One of the jobs of fisheries observers working aboard fishing vessels is to record the number of accidental deaths. This information then ends up with Wellington data analysis company Dragonfly Science. Alison Ballance meets Edward Abraham and Finlay Macdonald to find out what’s involved in the data analysis, and how they extrapolate out from a small number of vessels with observers to draw meaningful conclusions about by-catch rates across an entire fishery. They discuss how a recent analysis has highlighted a significant problem with by-catch of Parkinson’s black petrels in the Hauraki Gulf snapper fishery, whereas recent mitigation measures seem to have decreased by-catch of white-capped albatrosses.

In a significant move towards open data all of the by-catch information and analysis is available on Dragonfly Science’s website.

Southern Seabird Solutions is a group of fishers and other interested people working to minimise seabird deaths in fisheries. 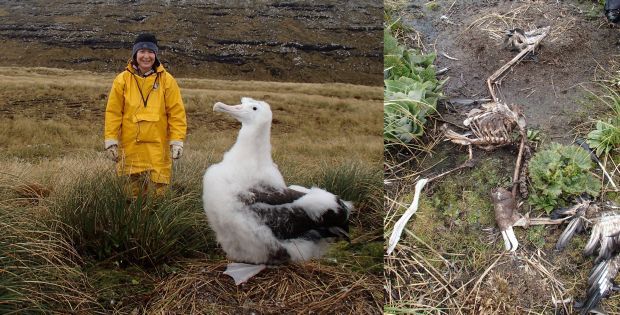 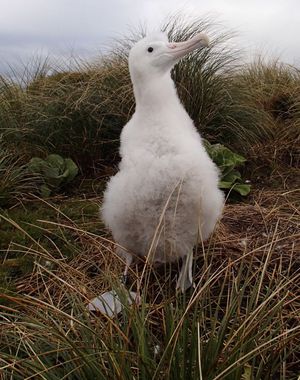 They might have the longest wingspan of any seabird in the world, but as two researchers have discovered during a 20-year study on remote subantarctic Adams and Antipodes islands, wandering albatrosses are surprisingly sensitive to changes taking place in the world’s oceans. Although an initial decline due to interactions with longline fisheries has been largely solved, both albatross populations underwent a significant decline in the mid-2000s which disproportionately affected females, and as a result there is now a severe imbalance in the sex ratio of breeding adults, chick production is much lower than formerly, and overall population size is about half of what is was in the early 1990s.

When Alison Ballance was in the Auckland Islands at the end of last year on an expedition to count yellow-eyed penguins she got a rare opportunity to join the Department of Conservation’s Jo Hiscock as she carried out some field work in the Gibson’s wandering albatross study area on the south side of Adams Island.

More recently, Alison caught up with long-time albatross scientists Kath Walker and Graeme Elliott to find out more about the population trends of Gibson’s wandering albatrosses on Adams Island and Antipodes wandering albatrosses on Antipodes Island. Here is a report on their most recent research season 212-13. You can listen here to an earlier interview with Kath and Graeme recorded on Adams Island in 2009.

Jo Hiscock in the wandering albatross study area on the south side of Adams Island (megaherbs often grow near albatross nests in response to the nutrient flush), and squid beaks and a piece of rope that have been fed to a chick and then regurgitated (images: A. Ballance)