Our Changing World for Thursday 8 August 2013 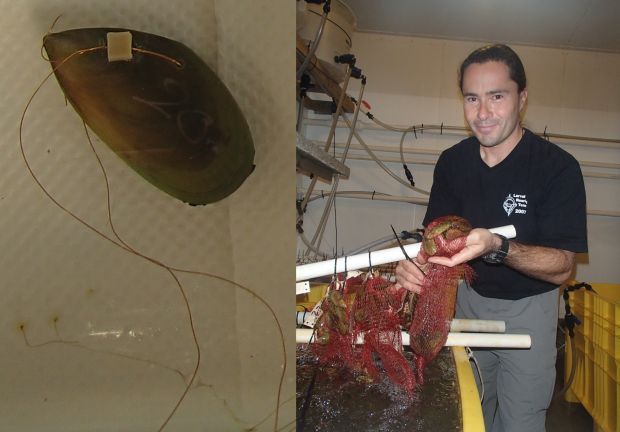 The Cawthron Aquaculture Centre at Nelson is selectively breeding Pacific oysters and green-lipped mussels to help New Zealand’s growing aquaculture industry. Norman Ragg is a shellfish physiologist who is trying to understand what goes on with the animal hidden inside its protective shell. He has tiny heart monitors that can detect the slow, 30 beats per minute, heart rate, and he carries out experiments that monitor oxygen uptake and weight gain. One of the results so far is that some of the selectively-bred mussel families are easily stressed while other families are much more laid-back. 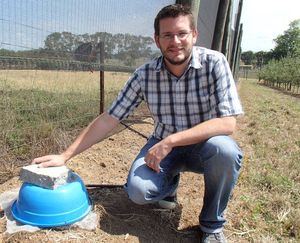 Last year we visited David Pattemore at Plant and Food Research at Ruakura near Hamilton, and were shown a concrete domicile or artificial nest, one of about 200 that were buried in the ground in avocado orchards in the Waikato and Bay of Plenty last spring. The project aims to find a way of establishing bumblebee colonies in orchards to help out with pollination and supplement existing honeybee pollination.

Alison Ballance was in Ruakura earlier this year and David took her to a nearby orchard to show her a trial domicile (left) that was now home to a bumblebee colony, and explained how successful the project had been. Interestingly, more colonies of Bombus ruderatus used the domiciles than the expected B. terrestris, and although the project was moderately successful David is continuing with the project and is confident he can improve the establishment rate of colonies.

The bumblebee project is keen to hear from people in the Waikato with dead or alive bumblebee nests in their garden. 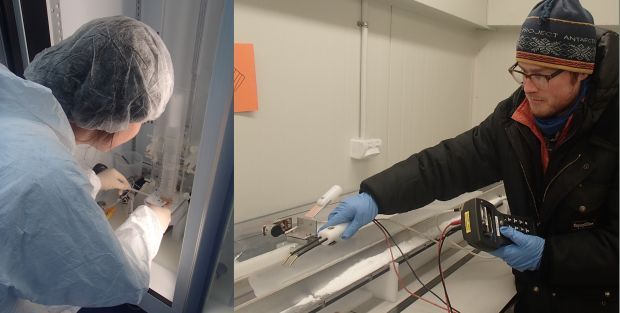 Antarctica’s Andrill project showed that the last time global carbon dioxide levels were as high as the present 400 parts per million was three to five million years ago, when there was a significant loss of ice around the globe. The Andrill project involved a sediment core that provided a long but coarse-grained climate record.

The Roosevelt Island Climate Evolution project– known as RICE – has spent the last few summers in Antarctica drilling a 760-metre long ice core. This core goes back about 40,000 years, to a period of rapid ice retreat and will give a very fine-grained picture of how quickly ice responds to an increase in temperature.

Over the last couple of months an international team of 35 people have begun extracting information from the precious ice core, and Alison Ballance heads out to the New Zealand Ice Core Research Facility to find out how it’s done. Victoria University PhD student Peter Neff shows her how the process begins, with cutting up part of the ice core and measuring electrical conductivity along the length of the ice. The conductivity is sensitive to sulphate levels, which indicate volcanic eruptions that are useful for cross-checking dates.

Nancy Bertler from GNS Science and Victoria University’s Antarctic Research Centre then explains how the ice is melted, and water from the inside of the core, along with air trapped in bubbles inside the core, is collected. Some information is collected in real time as the ice melts, while tens of thousands of vials of water will be further analysed over the next few months. Real-time measurements, such as stable isotope analysis show a clear annual record in the ice core.

The tiny bubbles in the tubes contain 12,000 year-old air, and are being analysed in real-time, giving clear seasonal patterns in the ice core (right) (images: A. Ballance)

Keith Petrie’s group at the University of Auckland is looking at how positive and negative expectations can influence the outcome of a medical treatment or procedure. In particular, his group is looking at placebo effects (which is when beneficial effects occur that are not attributable to the physiological action of a medication or procedure itself) and nocebo effects (where, rather than positive effects, negative effects occur). 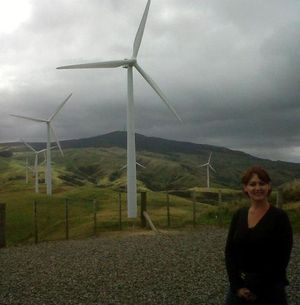 PhD student Fiona Crichton (left) has been looking at whether the alleged health risks presented by wind farms can trigger symptom reports. People living near wind farms often complain of a range of health symptoms ranging from sleep disturbance and headaches to nausea and heart palpitations. The concern is that infrasound (subaudible) sound is causing these symptoms. Her studies suggest that psychological expectations are the cause of symptoms reported from wind farms, with negative discussion of health effects triggering complaints (nocebo effect). She has also found that when positive information is provided about infrasound, beneficial effects result (placebo). Since infrasound is undetectable to the human ear, her initial study could use sham infrasound, which meant that participants could think they were listening to infrasound, when in fact they were listening to silence.

Power of suggestion - additional material for the wind turbine story

Keith Petrie’s group at the University of Auckland is looking at how positive and negative expectations can influence the outcome of a medical treatment or procedure. In particular, his group is looking at placebo effects (which is when beneficial effects occur that are not attributable to the physiological action of a medication or procedure itself) and nocebo effects (where, rather than positive effects, negative effects occur), and their influence on the outcomes of medicine and infrasound