Our Changing World for Thursday 18 July 2013 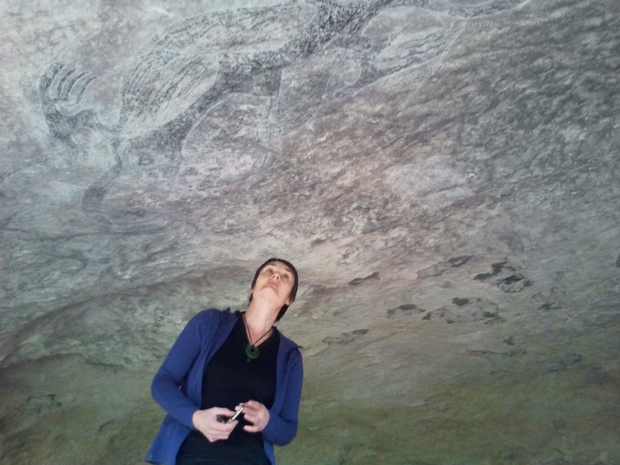 Ngāi Tahu Māori Rock Art Trust curator Amanda Symon inspects a drawing on a limestone wall that would have provided shelter for a large group of people (image: V Meduna).

Throughout South Canterbury and North Otago, some limestone outcrops are covered in black and red drawings of moa, the giant Haast eagle, birdmen, taniwha and other mythical creatures. Almost 600 sites of ancient Māori rock art have been identified, and new ones are still being discovered. In the 1990s, Ngāi Tahu, the iwi which holds kaitiakitanga, established the South Island Māori Rock Art Project, or SIMRAP, to record as much rock art as possible within the South Island. Collectively, these drawings provide a record of Māori occupation, in a continuum that extends from moa-hunting to early European contact, depicted in drawings of European sailing ships and horses.

Māori rock art is the youngest expression of a tradition that goes back more than 40,000 years in Australia and Europe, and it have attracted the interest of French archaeologist and cave art authority, Jean Clottes, who visited recently to establish an exchange programme to allow young Māori researchers to travel to France to see the rock  art collections there.

In this features, Veronika Meduna visits the Te Ana Māori Rock Art Centre and then joins Ngāi Tahu Māori Rock Art Trust curator Amanda Symon for a tour to see the diversity of sites and drawing styles. University of Canterbury archaeologist Yann-Pierre Montelle, explains what function rock art may have had during the development of increasingly complex settlements, and Jean Clottes shares his impressions from his first visit to see the ancient drawings.

The valley which features the Cave of the Taniwha, and Yann-PIerre Montelle at work on one of the taniwha drawings.

A light trap that uses ultraviolet LEDs to attract flying insects; the insects are caught in the tray of water under the light. The image at left was taken with a flash and shows the set-up, while the image at right shows how the trap appears in the dark (images: A. Ballance)

Richard Storey is a freshwater ecologist at NIWA in Hamilton. He is interested in how insects recolonise streams after they have been dry, for example intermittent streams that dry up in summer or streams that are being restored from a damaged to a more natural state. As part of this project he is trying to work out how far aquatic insects such as caddis flies can fly, and for this he uses ultraviolet light traps. Traditionally he has used fluorescent UV lights, but he is now testing the effectiveness and reliability of new UV LEDs. Alison Ballance joined him at an urban stream in central Hamilton as he was testing the effectiveness of two different UV LED set-ups compared to a fluorescent UV light, and discovered that Hamilton’s urban streams are surprisingly rich in insect life. 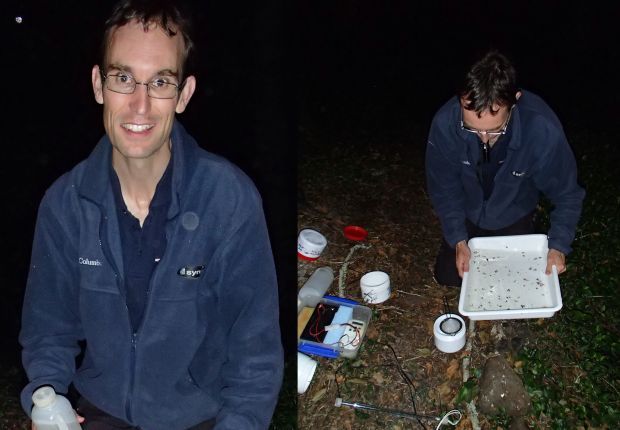 Richard Storey (left) empties flying insects caught at a light trap - the sample is counted and analysed back in the lab (images: A. Ballance)

The Valuing Nature conference that took place in Wellington on 9-10 July was a follow-up to last year’s Transit of Venus forum in Gisborne. It brought together local and international speakers to discuss how to better recognise the value of ecosystems and nature in the economy, and over the course of four keynote presentations and four panel discussions covered concepts such as natural capital, price versus value, and ecosystem services.

Our Changing World presents excerpts from four speaker’s presentations: Pavan Sukhdev from the international Economics of Ecosystems and Biodiversity Project; Marjan van den Belt from the Ecological Economics research unit at Massey University; Jonathon Boston - Director of the Institute for Governance and Policy Studies at Victoria University; and Lin Roberts from the Department of Environmental Management at Lincoln University.

Our Changing World also presents full recordings of Pavan Sukhdev’s keynote address and the four panel discussions (these will be posted over the next few days) – you can find these under the audio link.

You can listen to Pavan Sukhdev on Saturday Mornings with Kim Hill, and Robert Watson and Marlene Laros on Ideas during Sunday Morning with Chris Laidlaw.