Our Changing World for Thursday 25 April 2013

The main Heathcote River (left) recovered surprisingly quickly after millions of litres of raw sewage poured into it following the February 2012 earthquake, whereas the small tributary stream (right) remains full of liquefaction sediment and is unlikely to recover on its own. From left: Naomi Wells, Tim Clough and Jon Harding (images: A. Ballance)

After the February 2011 Christchurch earthquake millions of litres of raw sewage – along with lots of liquefaction – poured into the Avon and Heathcote Rivers. A team of biologists quickly got to work to measure the impact of this catastrophe on river life – and they were surprised by what they recorded over the next few months. Alison Ballance joins PhD student Naomi Wells and Tim Clough from Lincoln University, and freshwater ecologist Jon Harding from the University of Cantebrury, at one of their study sites along the Heathcote River, to hear how the river’s microbial communities and fish and invertebrate life responded to the sewage input and then recovered once the sewage was diverted out of the river.

A paper on the research findings is due to be published in the journal Environmental Pollution later this year: Wells NS, Clough TJ, Condron LM, Baisden WT, Harding JS, Dong Y, Lewis GD, Lear G (in revision) Biogeochemistry and community ecology in a spring-fed urban river following a major earthquake.

You can find the Environment of Canterbury report on the state of the rivers after the earthquakes here (pdf).

Our Changing World looked at the impacts of the earthquakes on the Heathcote-Avon estuary with David Schiel from Canterbury University and John Zeldis from NIWA – you can listen to that story here.

Neil Dodgson and a video being analysed of an actor expressing a "discouraging" mental state (images: University of Cambridge)

Humans are remarkably good at inferring another person’s mental state from facial expression. Computers, on the other hand, are “mind-blind”: oblivious to their user’s mental state and intentions. Ruth Beran meets Neil Dodgson from the University of Cambridge who is trying to create “mind-reading machines” that use observed expressions and gestures to work out what a person is thinking. The system uses statistics to model mental states as a number of interacting facial and head displays.

Researchers at the Computer Laboratory at the University of Cambridge are working on various applications for this technology. For example, online learning tools may one day be able to read the expressions on a learner’s face and respond in the same way that a teacher might. Or an emotional hearing aid for people who have troubles reading other's emotions. The technology is already being used for advertising. 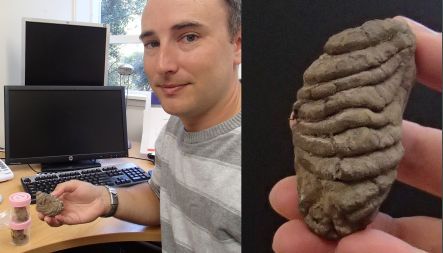 Scientists call them coprolites. You and I would call them fossil dung. And it turns out these dried droppings can give remarkable insights into the life and times of extinct animals, such as the giant flightless moa.

Alison Ballance heads to Landcare Research at Lincoln where Jamie Wood tells her what surprising things he’s been learning about these mysterious birds from the poo they left behind.

You can read more about the extinct moa in ‘Moa – the life and times of New Zealand’s legendary bird’ by Quinn Berentson (Craig Potton Publishing 2012). This book is one of three finalists in the Royal Society of New Zealand Science Book Prize, along with ‘Science on Ice - Discovering the Secrets of Antarctica’ by Veronika Meduna (Auckland University Press 2012) and ‘Graft’ by Helen Heath (Victoria University Press 2012) – the winner will be announced in mid-May. 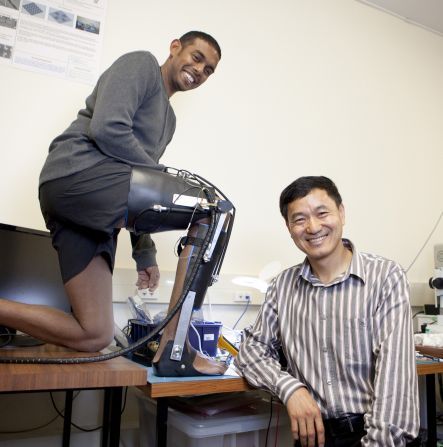 Mervin Chandrapal and XiaoQi Chen with their walking exoskeleton (image: University of Canterbury)

A team of mechanical engineers at the University of Canterbury have been developing a lower-limb exoskeleton to help people with knee joint issues. The device uses a person’s own biological signals to move the leg and aims to assist the elderly or patients recovering from injury.

XiaoQi Chen has been leading the team, which includes PhD student Mervin Chandrapal, who has been building and testing the current prototype, and summer students Cheng-Yueh Liu and Sam Jackson, who have been designing a more universal exoskeleton that is reconfigurable for most people. In the future, the team will conduct clinical trials but at the moment the device is only being used in preliminary experiments on able-bodied people.

Ruth Beran meets the team and sees how the device works, and you can view it in action below.