Our Changing World for Thursday 18 April 2013

Alex James is a mathematician at the University of Canterbury but she spends much of her time in the bush, helping ecologists better understand the complexity of ecosystems. As a member of the university's Biomathematics Research Centre, she uses mathematics to model complex problems and to explore their underlying principles. Among other projects, she's been involved in helping ecologists to model the spread of tuberculosis in possum populations and to develop strategies to optimise translocations of endangered wildlife. 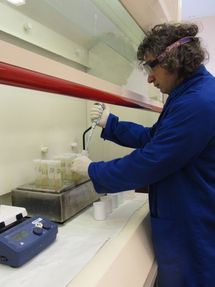 The National Radiation Laboratory (NRL) is part of the Institute of Environmental Science and Research and amongst other things tests food products for their radioactivity content and issues certification that it is safe for consumption so they can be exported.

NRL also tests products for radioactivity that are consumed in New Zealand, for example food products imported from Japan after the Fukushima nuclear disaster. However, all sorts of environmental samples are brought to the lab for testing, including soil, water, sediments, air filters, and oil sludge.

One of the most common methods for testing radioactivity in food is gamma spectrometry. Gamma radiation is ionising radiation consisting of photons, which can be detected in the same way that a dentist detects X-rays. Gamma detectors are used to test samples, with tests taking anywhere from a few hours to a week. Samples can then be “fingerprinted” with a spectrum showing the specific energies of each radionuclide present within the sample.

To test for alpha or beta particles, the sample matrix has to be completely destroyed by ashing in a furnace or processing in a microwave digester, with strong acids and high temperatures under pressure. The sample solution is purified and then electroplated or precipitated onto a thin film on a disc.

University of Canterbury geologist Mark Quigley and winner of the 2011 Prime Minister’s Science Media Communication Prize has earned a reputation for being a great science communicator. But when he’s not in the media spotlight explaining the intricacies of earthquakes he’s out and about around Canterbury building a picture of the region’s tectonic history, and also trying to understand what might happen in the future. 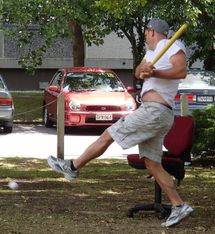 Working alongside Mark are a keen team of post-graduate students, and as Alison Ballance discovers, when they’re not out in the field there’s nothing they all like better than a communal ballgame at lunchtime. As the game of wiffle-ball takes place (the picture at left shows Mark batting) Alison chats with various students. Master’s student Peri Sassnet is modelling fault rupture using sand boxes filled with talc and sand to mimic the layers of gravels overlying faults on the Canterbury plains. PhD student Sharon Hornblow is looking for evidence of previous ruptures on the Greendale Fault, the unknown fault that ruptured in September 2010. PhD student Tim Stahl is working on the palaeo-seismology of the Fox Peak Fault in south Canterbury. Ben Mackey holds a Royal Society of New Zealand Rutherford Foundation 2011 Post-doctoral Fellowship, and he is looking for old rockfalls on the Port Hills that might be evidence of previous large earthquakes. He uses cosmogenic radionuclide dating that measures the surface exposure of rocks, and will help date any large seismic events.

Sarah Bastin is another of Mark’s PhD students – you can listen to her interview on Our Changing World about palaeo-liquefaction in Christchurch here.