Our Changing World for Thursday 6 December 2012 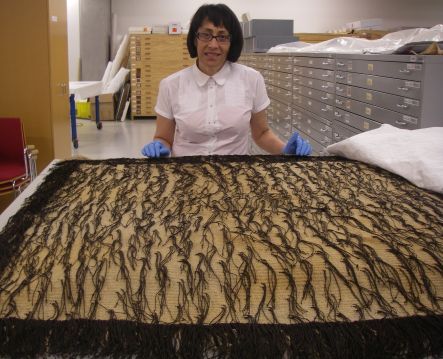 Rangi Te Kanawa with a kakahu or Maori woven cloak made from New Zealand flax fibre or muka. The decorative black thrums were dyed using hinau bark extract and iron-rich paru mud, and on this cloak they have been treated with sodium alginate to prevent any further deterioration (image: A. Ballance)

Last week on the programme we visited the National New Zealand Flax Collection, which holds varieties of harakeke valued by Maori for weaving baskets and cloaks. Te Papa Tongarewa, the New Zealand national museum, holds the world’s largest collection of such kakahu or Maori woven cloaks, dating back several hundred years. But age is taking its toll, and many of the cloaks are becoming very fragile.

Rangi Te Kanawa belongs to a famous weaving family, and she is also Conservator of textiles at Te Papa, with a special interest in Maori textiles. She has been collaborating with chemist Gerald Smith from the School of Chemical and Physical Sciences at Victoria University to find out what is causing these valuable cloaks to deteriorate, and to come up with a way of preventing them falling apart any further.

The main problem is with black-dyed textiles, where the muka or fibre was dyed with an extract from hinau bark and then submerged in iron-rich mud known as paru. Some varieties of harakeke are rich in hemicellulose, which produces acetic acid as it ages, and the iron-rich mud also increases the acidity of the fibre over time, and it is this acid which causes the deterioration. This is a problem common to all old textiles and also to old movies and photographs, and is known in museum circles as ‘vinegar syndrome’. Gerald and Rangi discovered that sodium alginate, an alkaline seaweed extract, can be used to consolidate the disintegrating fibres, essentially binding them together, and also counteracting the acidity and preventing further fading.

You can find a press release here (dated 11 September 2012) about the research effort. 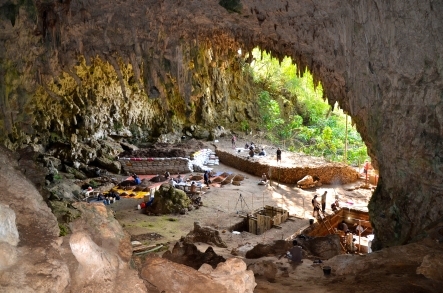 The archaeological excavations at the Liang Bua cave, where a new hominin species (Homo floresiensis) was unearthed in 2003, are ongoing (image: Brent Alloway)

A decade ago, archaeologists working in a large limestone cave on the Indonesian island of Flores unearthed the bones of a human who stood a metre tall, had large feet and whose brain was the size of an orange. Quickly nicknamed the ‘hobbit’, Homo floresiensis, is now recognised as a unique hominin species, found only on this particular island. 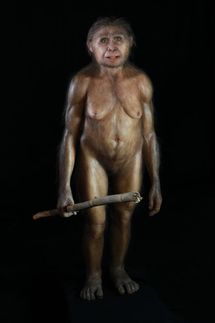 Ongoing excavations uncovered the remains of several more people and animals as well as stone tools, suggesting that these early humans had mastered the skills of flaking stone to make tools to hunt buffalo-sized elephants and battle huge Komodo dragons. Dating of the bones showed that they have lived on the island from between 95,000 and 17,000 years ago – indicating that long after the Neanderthals, our closest evolutionary relatives, had disappeared around 35,000 years ago, these more distant relatives of Homo sapiens were still living on remote Flores. The image on the right is a reconstruction of the type specimen, a 30-year-old female who stood (image courtesy of Elisabeth Daynès, Reconstruction Atelier Daynès Paris).

The discovery sparked debate, with some scientists even arguing that these were the remains of deformed modern humans with diseases that had caused them to shrink. However, more recently researchers put forward two main explanations: the hobbits are either the descendants of a race of far larger, ancient humans known as Homo erectus who had thrived around a million years ago and grew smaller once they reached the island because of its limited resources; or they are direct descendants of some of the earliest human ancestors to evolve on the African savannah three million years ago. In the latter case, the hobbits would change our understanding of how humans moved out of Africa.

In this interview, Thomas Sutikna, from Indonesia’s national institute of archaeology (pictured on the left with a hobbit skull) and Mike Morwood (on the right with Brent Alloway) and Adam Brumm, from the University of Wollongong, discuss the ongoing excavations and discoveries of faunal remains and stone tools that help describe the ancient world of the hobbits. Victoria University geologist Brent Alloway, who joined the team early this year, explains his research on volcanic ash layers on the island and the impact volcanic eruptions had on these early humans. (all images above: Brent Alloway)

The team also presented a public lecture in Wellington this week, which you can watch here. 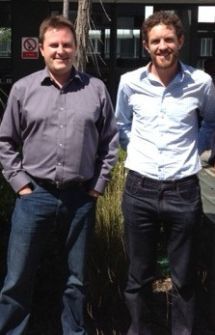 An often-used indicator of innovation is the total number of patents produced by a country. IRL’s Dion O’Neale (pictured right) and Shaun Hendy (pictured left) , who is also at the MacDiarmid Institute at Victoria University, have found that the distribution of patents amongst countries is well-described by power laws. Their research has been published in PLOS ONE.

When a power law is plotted in a double logarithmic scale, it becomes a straight line, and the slope of the line in this case results in exponents ranging from 1.66 (Japan) to 2.37 (Poland). This power law exponent can be used as a metric for studying innovation, as it appears that the smaller the exponent, the greater the innovation.

Those countries with greater funding for research and development, have a greater proportion of patents held in large companies, export specialised goods, and also tend to have smaller exponents. Countries like New Zealand, on the other hand, have larger power law exponents, and have resource based economies that export ubiquitous goods, with a larger amount of patents held by smaller companies, and lower amounts of research and development funding. 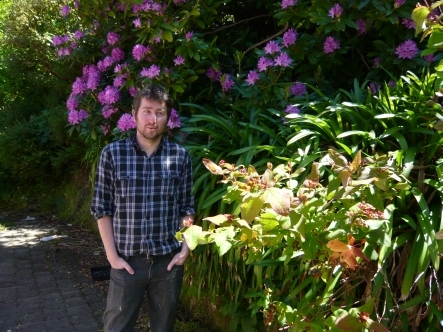 David Winter in his Dunedin garden, with an agapanthus plant that proved a surprisingly popular habitat for several invertebrate creatures. (image: V Meduna)

David Winter has just completed his PhD at the University of Otago, using evolutionary genetics to study the speciation of land snails in Rarotonga. But he describes himself as a 'geek of many colours' and is perhaps better known as The Atavism, a science blogger whose writing on anything to do with invertebrate life also appears on Sciblogs. David's passion for spineless creatures and the diversity found among invertebrate life forms is such that he recently became the only New Zealand science blogger to feature in an international collection of the best online science writing.

In this interview, he takes Veronika Meduna on a walk in his garden in search of native invertebrate life. They find a surprising variety of it in agapanthus plants, including harvestmen with super-sized jaws (which are found only on males and hence are thought to play a role in the search for a mate), native baby leaf-veined slugs and small red-green spiders, most likely of the genus Viridictyna.

Some of the spineless mini-fauna discovered in David Winter's  garden: a harvestman, at left, with his huge jaws, a tiny native slug, and a spider which has made its home on an agapanthus leaf. (all images: David Winter)