Our Changing World for Thursday 15 November 2012 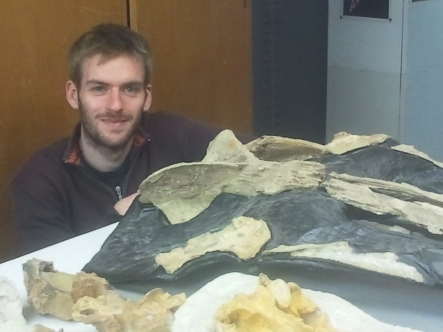 Felix Marx with some of the whale fossils at the University of Otago's geology department collection (images: V. Meduna)

For palaeontologists, whales are among the most interesting animals. They belong to a small group of mammals which made an evolutionary U-turn, changing their bodies back into a streamlined shape fit to live underwater. How whales managed to return to the sea has baffled even the greatest minds in evolution. In the first edition of Origin of Species, Charles Darwin proposed that whales had evolved from swimming bears, but he was ridiculed for this idea and decided to delete it from later editions. Nearly a century later, the 20th-century palaeotologist George Gaylord Simpson was still at a loss. Whales, he said, were the "most peculiar and aberrant of mammals". 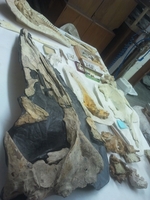 It is this description that sparked the interest of Felix Marx, who recently completed his PhD on the evolution of whales with University of Otago palaeobiologist Ewan Fordyce. He studied the whale fossils Ewan has collected in New Zealand and Antarctica over many years (a few examples are pictured on the right) as well as specimens from other parts of the world and was able to show that the diversity of fossil whales matches periods of evolution and diversification of diatoms, a prominent group of tiny algae that form the base of the marine food web. By analysing oxygen isotope records (a chemical fingerprint of oceanic temperature and global ice volume), Felix also uncovered that shifts in ancient climate during the period when Antarctica became isolated from other southern landmasses provided another evolutionary force. In conclusion, Felix proposes that food abundance and climate change drove the evolution of modern whales into the many species we know today.

Veronika Meduna meets Ewan and Felix in the basement under the university's Geology Museum to see some of the relevant fossils and to talk about another project on the pigmy right whale, a rarely seen baleen whale, and its position in the whale family tree. 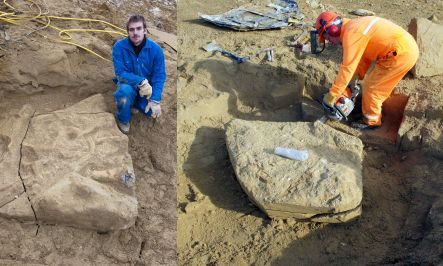 Felix Marx, in blue at left, and Ewan Fordyce, in orange at right, cutting through Otekaike limestone on a South Canterbury farm to recover a fossil whale that lived some 24 million years ago (images: University of Otago).

If you have any feedback or questions, don't hesitate to contact us: email ourchangingworld@radionz.co.nz, send us a tweet to @RNZ_Science or a letter to Our Changing World, Radio NZ National, PO Box 123, Wellington 6140 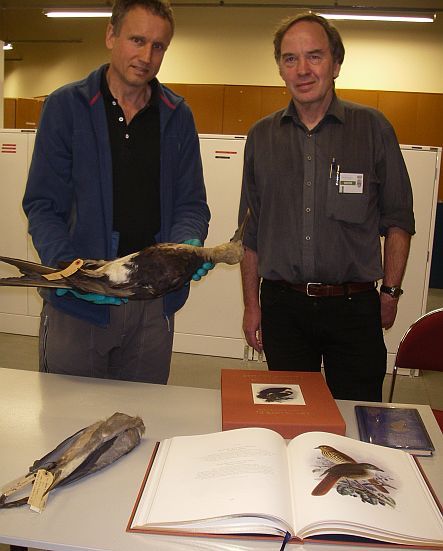 Colin Miskelly (left) holding a great frigatebird from the Buller collection held by Te Papa, and author Geoff Norman. The specimen on the table is a white-faced heron collected by Buller, and probably the first specimen of that species recorded in New Zealand (image: A. Ballance)

In the late 1800s Walter Buller published several volumes on the birds of New Zealand, lavishly illustrated by the famous English bird artist JG Keulemans. For a number of decades images from the second volume were widely used on everything from school stationary to bank notes.

When author Geoff Norman came across fine sets of illustrations from both volumes at the British Natural History Museum he decided they deserved to be published again. Alison Ballance joins Geoff and curator of terrestrial vertebrates Colin Miskelly in the bird room at Te Papa in Wellington to talk about the artwork and the birds, and to see some of the bird specimens collected by Buller.

Last week we heard about work at Agresearch that is helping keep carpets from fading, staining and being attacked by insects. This week Alison Ballance is off to Lincoln to find out how and why you go about tracing where wool products come from. Steve Ranford explains isotopic techniques for tracing wool back to a region of New Zealand, and then she hears from Azam Ali how wool proteins can be re-engineered to make wound dressings, and milk proteins can be reconfigured to become medical sutures. 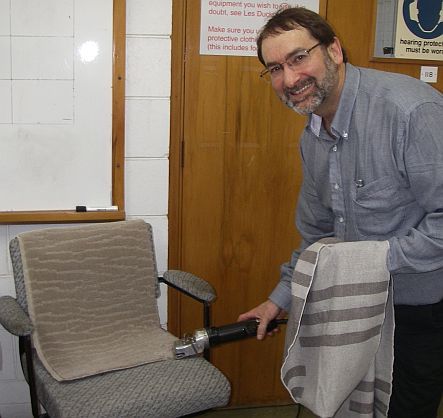 Steve Hanford, holding a fine merino wool scarf, demonstrates using clippers to sample wool from a carpet to analyse for its region of origin (image: A. Ballance)

Matthew Johnson from WellSleep at the University of Otago is conducting a study on the use of special milk produced at night, when the hormone melatonin is high in cows, to see if this helps people with sleep difficulties.

Participants in the trial drink two milk powder products separately for three weeks each, half an hour before bedtime. The study runs over a nine week period and is double blinded, meaning that neither the participants, nor the researchers, know which milk is being trialled. One of the products is from cows milked during the day (‘Day Milk’) and the other is from cows milked at night plus a modified milk protein (‘Night Milk’). The study is in conjunction with the milk processors Synlait, based at Dunsandel, just south of Christchurch.

Ruth Beran went to Ekta Bhindi’s family home and watched as Shelley Mather from WellSleep prepared Ekta for a sleep study with a polysomnography (PSG) machine by attaching electrodes to Ekta’s head and face to measure her sleep. Ekta also wore a watch-sized actigraph device which registered movement and light during the night. She also filled in a sleep diary over the course of the study.

The next day, Matthew Johnson scored Ekta’s sleep for that night and found that although she took slightly longer to get to sleep, her sleep was better after drinking the milk. This could be due to the milk, placebo or chance. It’s only when the milks are compared and there are more participants in the trial that the results will be clear.

WellSleep is looking for more trial participants, like Ekta, who regularly take a long time to fall asleep at night and are based in Wellington. If you would like to take part click here for more details, or click here to email WellSleep.

The 18th mystery sound is an Auckland tree weta stridulating by rubbing its knobbly back legs against its equally knobbly body. You can find a link to that story about weta ears here.