Our Changing World for Thursday 20 September 2012

Speech-generating Tools for Children with Autism

One in 100 children is affected by autism spectrum disorder, and most have difficulty communicating. Victoria University’s Jeff Sigafoos (left) is trying to identify the best communication tools for those children with autism who don’t speak. He’s been testing the three most common alternatives to speech for autistic children – sign language, pointing to pictures and electronic speech-generating devices, which include applications on the iPad or iPod Touch as well as a range of text-to-speech machines. Ruth Beran goes to his clinic in Wellington’s Karori, and watches as trainers Laura Roche and Michelle Stevens help six-year old Jonty Kingi use an iPad to generate speech and enable him to communicate. Jonty uses the iPad to request a break from an academic task like reading, or something he wants, like his favourite food or toy. The iPad has been programmed so that icons, such as a stop sign for taking a break, can be pressed and synthesise speech.

Autistic children who fail to develop speech are more prone to tantrums and aggression, mainly due to frustration at being unable to communicate. Tools like the iPad to generate speech may help reduce these behavioural problems.

In 2010 Murray Cox was one of the inaugural Rutherford Discovery Fellows. He’s a computational biologist at Massey University, working on a diverse range of topics, from settlement of the Pacific to the genetics of fungal pathogens. He applies sophisticated statistical analysis to the genome, which is an organism’s entire complement of DNA.

Alison Ballance heads to Palmerston North to talk with Murray Cox and PhD student Elsa Guillot to find out more about computational genomics and the kind of problems it can be used to solve. She hears how Murray recently worked out that modern Malagasy people on the island of Madagascar, off the coast of Africa, are descended from a group of about 30 Indonesian women who arrived there within the last 1500 years. Murray also explains why the spaces in between genes can be as important as genes themselves in answering some questions, and why less data can sometimes be more enlightening than lots of data. 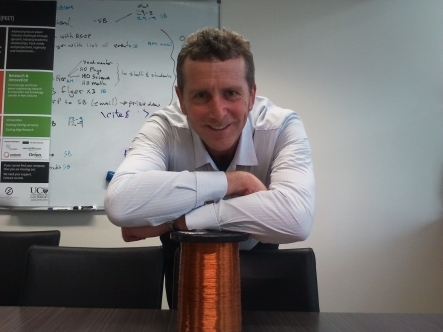 Allan Miller, the director of the Electric Power Engineering Centre at the University of Canterbury, leads the “Renewable Energy and the Smart Grid” research project (image: V Meduna)

Some of the additional renewable generation is expected to come from households using photovoltaic rooftop panels to produce electricity for their own use and feeding excess power back into the national grid. Allan Miller, the director of the University of Canterbury’s Electric Power Engineering Centre, leads research to ensure that the grid is ready for it. Since both solar radiation and wind strength vary between seasons and on a daily basis, the research team has to look for ways of dealing with this variability to ensure a secure electricity supply.

The CeleBRation choir at the University of Auckland’s Centre for Brain Research was established in 2009 as a social singing group for people with neurological conditions like stroke or Parkinson’s disease. But it’s also, at the suggestion of choir members, become the focus of a feasibility study by a group of researchers interested in measuring the benefits to choir members from their regular singing and socialising. The 12-week feasibility study showed an improvement in pitch with people with aphasia, and choir members reported improvements in speech as well as mood and feelings of well-being.

Alison Ballance heads to the University of Auckland’s Tamaki Campus to talk with Suzanne Purdy, head of Speech Science in the Department of Psychology, speech therapist and PhD student Sylvia Leao, and founder of the choir and Master’s student Laura Fogg who is also Communications and Liaison Manager at the Centre for Brain Research.

Radio New Zealand's One in Five programme ran a story about the choir back in 2010 - you can find that story here.

The tenth mystery sound from the opening theme is a Chatham Island tui (sings a much simpler song than tui on the mainland) – it featured in a two-part story about the translocation of tui from Rangatira/South East Island to main Chatham Island that was part of a series about the Chatham Islands. Here are links to the complete Chathams series:

Sweetwater Covenant, Chatham Island - The Chatham Islands boast many private conservation covenant covenants - and one even has a predator proof fence